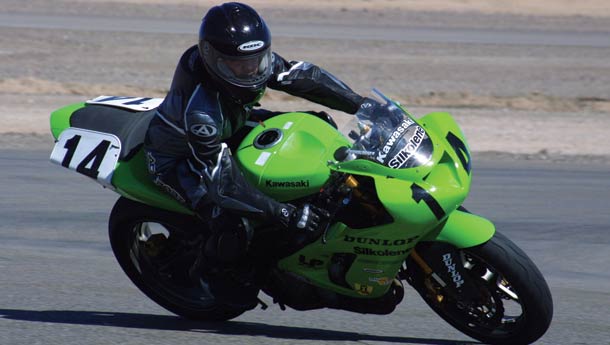 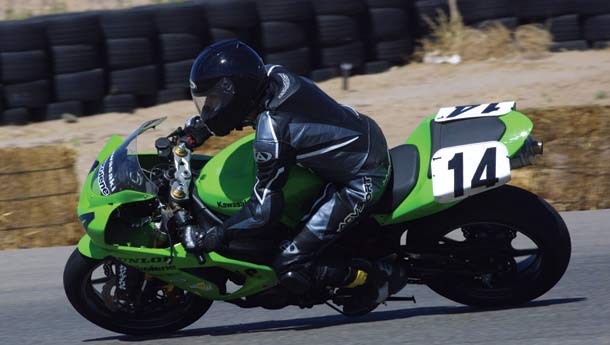 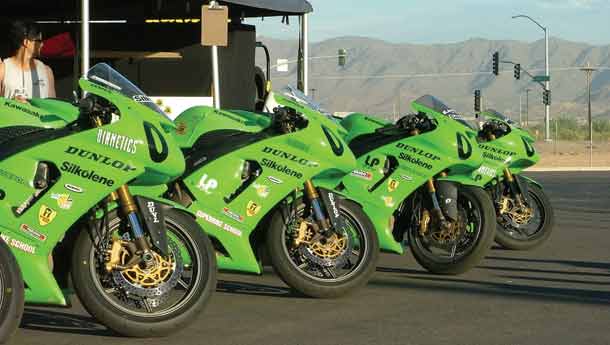 Yes, I did it! On turn nine of the Arizona Firebird Raceway, the plastic blob on my knee made contact with asphalt to leave me with my-greatest-ever-moment-on-a-motorcycle-so-far. I actually got my knee down.

On the next lap, I did it again. Only this time, the reaction was more ‘Nailed it!’ rather than the earlier ‘What was that?’ And just as I was ready to make yet another mark on the slider, a chequered flag at course control beckoned a single file entry into the pits. That was that.

But my disappointment was short-lived and as I thumbed the kill switch on my number 14 Kawasaki ZX-6R for the last time, the rented KBC gave way to the widest grin man has ever seen. At that moment, nothing seemed to matter. Not the fact that I had flown halfway around the world for a rider training program, or that I had positively emptied most of my career earnings, or the fact that I was paying a hundred dollars a day (a day!) to drive around in a rented 1.6 Focus (renting is not that expensive, but under-25 insurance is). At that moment I could’ve easily claimed to be the happiest man alive and I certainly had the widest chest in the northern hemisphere.

Those of you who aren’t aware, (not reading Powerband, eh?) California Superbike School is an institution for motorcyclists and Keith Code, the founder, an institution by himself. Over the past 25 years, he has trained over 150,000 students. Actually, trained is too small a word. Kept them alive is more like it. And he hasn’t just gone about teaching Joe Average how to keep the rubber-side down. This guy has worked with the best of them and his protegés include Doug Chandler and Scott Russel. Haven’t heard of them? Maybe you’ve heard of Wayne Rainey then. No? Dude, you need to get a life.

In all seriousness, Code has been analysing riding for a quarter of a century now and needless to say, his findings are profound. Keith believes that riding is a complex challenge that has simple answers. And the California Superbike School is the place where you point all your questions at. Over the years, Keith has ‘created’ the science of riding a motorcycle and the CSS is his lab. And he had the sense of humour not to call it motorcyclology or something equally ghastly.

In my two-day programme, the first day had begun with me turning up at daybreak and signing a form with a clause that sent me home if I had a crash. Home was ten thousand miles away and the fact that I had ridden a 600cc motorcycle just once before didn’t really boost my confidence. To make matters worse, I just had my credit card swiped for a 750 dollar deposit for the bike and a 200 dollar deposit for leathers. Anyway, I had a job on hand, so I strolled off to the nearby bunch of leather-men, to chat up with them and to try and behave like a journo. Job one: listen in.   ‘So what do you ride?’ asks one. ‘I just got a 749S,’ quips another. ‘Is that a Yamaha?’ comes the question. Strangely enough, this flood of ignorance proves to be the biggest confidence booster since my arrival at the track and before the Duc rider has an opportunity to answer, Code calls us.

Wearing a CSS shirt and bermudas, he glances at all the students with a mischievous grin and begins introducing his staff, the riding coaches. These are the guys who will be following us on track and are a mighty impressive pack. All of them happen to be racers, (it’s a requirement) and each one of them is hand-picked. These guys, apart from being phenomenal riders, know what they’re talking about and happen to be great teachers as well. The kind with whom you don’t fear asking stupid questions.

With introductions out of the way, Code asks Level 1 riders (novices) to take a seat and begins by talking about motorcycles and riding. ‘There are just two mistakes you can make on a motorcycle,’ he says, ‘One is to get on it and the other is to get off it.’ It’s a joke but it helps to disperse the tension in the classroom and sets the tone for the rest of day as he begins to speak about the first drill – throttle control.

Mastering the throttle is fundamental. ‘A bike works best under moderate acceleration,’ he says. ‘Think of the accelerator as a dial, not a switch and keep the bike in fourth gear, and no brakes.’ The famous ‘fourth gear no brakes’ rides pillion on a theory that students learn the track and get a sense of the corner entry speeds. It also helps prevent an eminently probable pile-up since everyone has restraint on the top of their minds.

Before you go out on track, you meet Trevor. He’s the course controller for the day and makes sure you know what you are supposed to do on track. Out on track, I could feel the ‘no brakes’ theory fall squarely into place immediately. With entry speed being my only concern, I could tip the bike in and then progressively build up on the throttle. Pretty simple.

Back in the classroom, Keith starts by asking us a lot of questions, which as I later found out, forms a huge part of his teaching method. At first, it throws you off a bit, but the point here is that you discover a lot of things on your own. ‘I did a course on how people study, it’s called Scientology and it taught me how to teach and then I applied it to riding,’ he says when I ask about how he had mastered the art of getting through to his students so clearly.

The next session was all about turn points and dealt with putting you in control of the corner by telling you exactly when to start turning in. This sets your line right through the corner and they spoon-feed you a bit on this one by putting a yellow cross on the tarmac indicating where you have to start turning in.


‘So what are you going to do for me, Sheeenad?’ asks Trevor. ‘Wheelies and stoppies!’ He looks at me like I’ve landed from Planet Weird. ‘Just kidding... turning in at the Xs’ I say and he waves me on.

The next drill is about counter steering. Everyone’s done this before, but this time we were encouraged to do it quicker than we normally would, at the yellow Xs on the tarmac. Keith says ‘Once you countersteer at the beginning of the turn, and if you are on the right line, you don’t need to make anymore steering corrections.’   The fourth drill for the day, though the easiest, had amazing results. ‘When you get on the bike this time, do nothing’ he said, and the idea was to let the bike do most of the work for you. How? Firstly, because you loosen up physically, you have no additional input once the motorcycle is bent over. Secondly, everytime the motorcycle hits a bump, the suspension is free to work on its own. All I can say is, though its hard not to tense up, it feels great once you get it right and it is amazingly comfortable. Besides, as Code says, ‘It takes only five pounds of pressure to steer a motorcycle, so why all the effort?’

Between the two drills though, I had a go at the off-track drill, which proved to be the biggest revelation of the day. You see, I have been riding for seven years now and always thought I had a God-given ability to get maximum lean from a motorcycle. So when Misti, the off-track instructor, asked me to do a slalom, I instantly kept pushing the motorcycle away from me as if I have been motocrossing since birth.

Now I know most of you out there know to corner with the motorcycle, rather than against it, but somehow I had gotten through seven years of riding doing just the opposite. More than one rider I spoke to had discovered and corrected something that they had been doing for a long time and this really is the magic of CSS. And if you are thinking that I learnt how to steer a motorcycle from a girl, let me tell you that she happens to be an AMA racer. So there.

The second day was all about training your eyes. ‘They are programmed to kill you,’ says Keith and he’s right. Ever realised how everytime you are on the road, you tend to scan for things (apart from looking for a mate) that will pull you down? The open manhole cover, diesel spill, sand on the tarmac... these are things that you tend to fixate on and the first four drills of Level Two focus on training your eyes. So when we went on track, we went looking for reference points. The Yellow X’s were absent this time around, so the whole exercise revolved around finding points on the track where you start turning in, get on the throttle and roll off.

Now, you are probably thinking how you can ever train your eyes against their survival instinct. You can, and the best explanation I have right now is, well, because Keith says you can.

By the end of the second day, my improvements were proving to be exponential and with two laps to go, everything that was taught over the last two days just fell into place and led to my defining moment.

So do I recommend the school? No, recommend isn’t strong enough a word. I think it’s an absolute necessity for anyone who is even half-serious about motorcycling. And it doesn’t matter what bike you have. The first machine I rode after I came back was an LML CRD100, and the learnings translated brilliantly even to this piddly motorcycle. If you do own a superbike, I think it’s the best add-on that you can buy for your motorcycle. The best part is, unlike any other add-on, this one will stay with you for life.

And even though you might think you do most of these things already, at CSS, you learn why you are doing it. And how to do it just right.