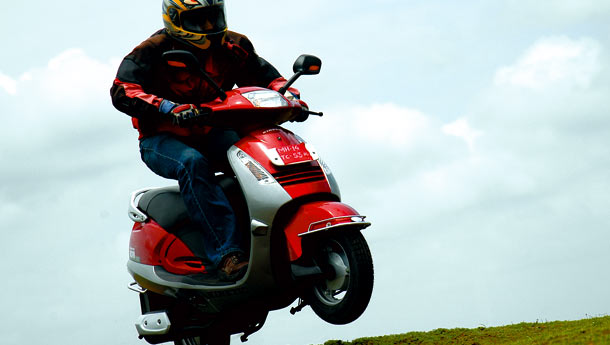 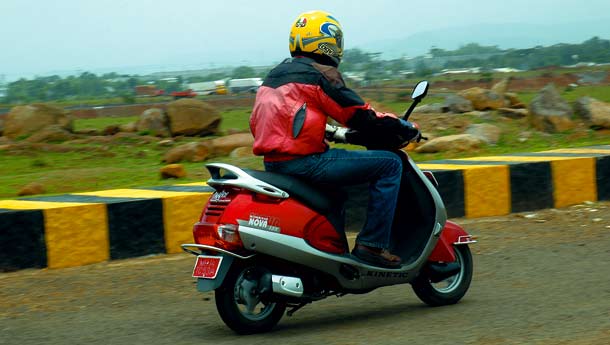 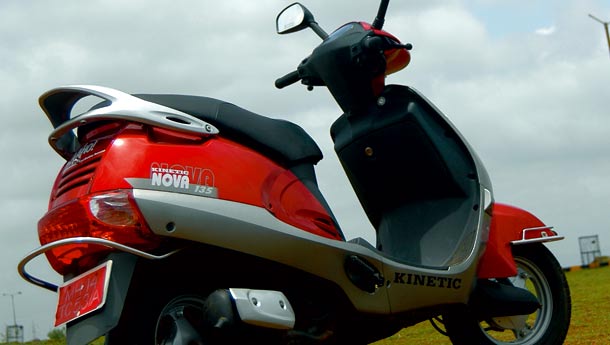 In a complete aberration of the Shumi time-space equilibrium, I was present at the new Tata Sumo launch and drive. One of the R&D men was asking various journos what they thought could be improved further. I helpfully suggested that they should find themselves a nice homely little 400 bhp V8 to slot into the Sumo. That would cure all its evils.  Fortunately, he didn’t hear a word.

But that same thought did come back to me when I rode Kinetic’s new Nova 135. You see, as enthusiastic road testers, we at Motoring generally give more powerful vehicles a slightly easier time than a good but underpowered set of wheels. The old Honda City proves that point. The old car was flawed, but its crystal clear 100 bhp voice was very hard to argue against. Indeed, it won all manner of comparisons, awards and accolades at BSM.

Back to the Nova, then. When we first rode the 115cc Kinetic Nova, we were quite surprised to see just how well Kinetic had managed to benchmark it against the Honda Activa, its primary target. We were rather taken by the leap forward Kinetic had made versus their earlier scooters and how much the 115cc scooter promised. In time, Kinetic has refined the engine, changed bits and parts to create an even more sorted-feeling engine.   The Kinetic Nova 135 is the next big step.The scooter’s engine was bored out from 50 mm to 54.5 mm to achieve the new 134.8cc displacement and various driveline components were re-specified to deal with the jump in power. Come to think of it, ‘jump in power’ describes almost precisely the first impression of the new scooter.

Sitting calmly on board, chatting with the Kinetic men, I happened to blip the throttle. The 135 Nova almost took off, with the front suspension unloading as the centrifugal clutch bit immediately. It was quite obvious that the new motor in the Nova is a new animal. The power output has grown by 1.3 bhp to a healthy 8.5 bhp, with a 1 kgm torque peak along the way. The 135 will get 60 kph in next to nothing and on more than one occasion, I saw 95 kph on the speedo before running out of road. However, Kinetic claims a top speed of just 75 kph, and a 0-50 kph time of 6.1 seconds. The power delivery is a bit immediate, which is scary initially, but immensely likeable as you get used to it. The best bit is that the power doesn’t tail off much well past an indicated 80 kph, so you can plug that top end for every last drop of go in it. And the Nova 135, for its part, will glug gently to extract maximum from every drop. With the help of a dual mode CDI ignition, the scoot should return 55 kpl in everyday riding.

On the move, it is very refined with no vibration at any revs. The starter motor’s trademark ringing noise was noticeably loud. Then again, we rode a near final-spec proto, so that shouldn’t affect regular production models. On the other hand, the ride quality has improved leaps and bounds. Landing from the jumps doesn’t produce the plasticky thumps we’ve grown used to with scooters and bazzing down this fresh new bumpy road didn’t produce as much of bounce as I was expecting.   In fact, the ride quality was impressively well-tuned. We know from past riding experience that the Kinetic Nova is a decent handler and the 135 carries that trait well. In fact, with the extra power on-tap I’d even venture so far as to say it feels more planted. Some of that extra stability is probably also due to the tyres which aren’t for once, the silly star and stripes patterned jobbies that had become so popular.

The styling is much the same, with a neat two-tone paint job marking the minor visual difference between the smaller and this Nova. Our red and silver machine looked quite neat. Also, the re-coloured instruments manage to look quite nice. Kinetic persists with the MMx device – still a huge irritant, thankfully, it does come with a toggle switch that cancels the noise.

As I said, power is a broad-brushed solution to loads of problems. But it isn’t without reason that they say power corrupts. Yes, the new 8.5 bhp power output creates a couple of hiccups. First, the front suspension. Kinetic still uses the same trailing link front suspension with its natural anti-dive properties. However, at speed, this can be dangerous. You see, the front dives slightly under hard braking. But after a point, the suspension begins to anti-dive and starts raising the front end, causing a weight transfer backwards. If the rider doesn’t know enough to back off the brakes at this point, the front will lock, causing an almost-impossible to fix loss of directional control. Which will usually lead to a crash. A set of telescopic forks should easily fix this. The forks would also allow the fitment of a disc brake,which I thought is now needed to reign in a peppy scooter like the Nova 135.

But that is the single crib. I suspect that lack of visual difference between the 115 and 135 will probably cause a bit of trouble on the showroom shelf as well. However, that apart, the Nova 135 is quite likeable. It makes a good amount of power, delivers it without lag or delay and hastens to plaster a smile firmly on your face. Just what good two-wheelers should do.