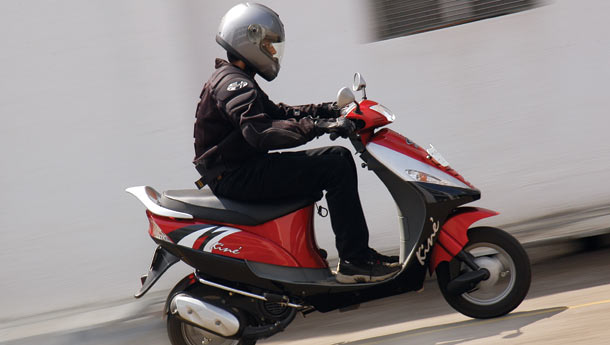 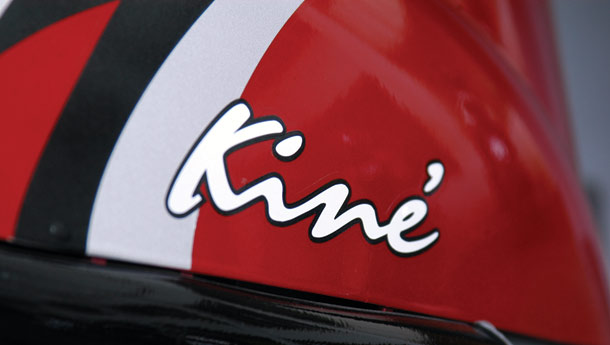 If you were to give a 70cc motor to an American, he would promptly make a chainsaw out of it. If you gave it to an Italian, he would put it in a double cradle frame, paint it in racing stripes and start a racing series. Give it to Kinetic though and they’ll build a perky scooterette around it. Put it down to cultural differences.

Kinetic seems to be undergoing a bit of a transformation these days (read Shumi’s story) and I would imagine that someone with more than a handful on their hands wouldn’t bother much with the current line-up, given that the future (read Italjets) is so exciting.

Yet Kinetic have had the gumption and time to rework the nifty Zing 80. Perhaps reworked is a big word to qualify the changes. They aren’t something you would notice the first time you see the new Zing, er... Kine’. Okay, just for editorial ease, we’ll dispense with the irksome apostrophe. Come to think of it why not dispense with it completely?

The Kine wears a new three-tone paint job, so the underbody panel gets one colour while the top half gets the other two with some graphics on the side. Lest you forget to spot it, the new headlamp is a bit bigger than before and the new name, complete with the apostrophe on the flanks.

What gets my goat is that name. People affectionately refer to their Kinetic Hondas as Kineys. We Motoring journos too, refer to the scooter by that name. In short ‘Kiney’ is a brand name of significant weight and recall and somehow, that seems a bit wasted on the repainted Zing 80. Kinetic’s theory is that Kine makes you think of something small  (and rhymes with tiny?).  I’d have been far happier if they had reserved that name for one of those new scooters that threaten to blow every other scooter clear out of the water. Want an example? Flip to the next page...   To return to the Kine, it still comes with that rorty 71.5cc two-stroke 4.2 bhp engine. And before you start poking fun at it, let me remind you that’s more power than you think. It isn’t enough to give you a whiplash injury, but no matter what you ride, you will be surprised the first time you wring that right wrist. The Kine pulls cleanly from a standing start and the well matched vario and the ready power delivery will see it run up the numbers on the speedo pretty quickly. The speedo is calibrated to 80 kph and it will blaze to 60 kph in about 11 seconds. I remind you, blaze is used as a relative term here. It will also travel about 50 kilometres every time that you fill her up with a litre of fuel. Also, the Kine is a bit small so unless you or your friend resemble Calista Flockhart, two-up space will be an issue.

As you have gathered, the Kine’s okay. What would really excite me is seeing Kinetic make a scooterette that looks so good that it’s simply irresistible. Then you would have people buying the scooterette not because they need it, but because they want it. If Kinetic can do that, then both the price and the practicality aspect of the scooterette would be like the West Indian cricket team without Brian Lara: they wouldn’t matter.

Waitaminnit... Don’t they already have something like that? I believe it’s called the Velocifero, Or as Srini calls it, the Velociraptor.