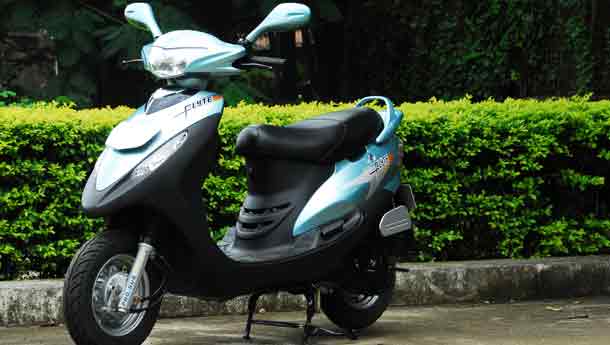 Your cousin learns how to make lemon tarts from this world-famous lemon tart maker type. She cooks up a batch and asks you to come and have a sample. You turn up, all drooling and all, imagining the sunburst of the flavour nipping your taste buds. Then she offers you one tart. One teensy-weensy one that’s gone before your brain can take down the details of the taste, before you can absorb the minutiae of the flavours. And she says, ‘Don’t worry, I’ll send you a boxful soon so that you can really savour them.’ Goddamn.

Well, that just about sums up my really short ride on Kinetic Sym’s first Indian product, the Flyte. To give you a little background, Kinetic took pains to explain that they left nothing to chance, so everything was market researched in fine detail. The Flyte is based on the X’Pro 125, which looks visually nearly identical to the Flyte. The X’Pro happens to be one of the most popular of Sym’s range worldwide. What they changed was the seat shape and design, eliminating the step in the seat and raising the ride height to clear Indian roads. And that’s more or less it.

Since we always end up looking at the bikes first, it would seem natural (also convenient, since you don’t have to think of the story’s flow, right? – Joshua) to start there. A couple of journos there were already making noises about how Kristal the front looks and how Pep+ the rear looks. And I have to admit they do. But then again, the X’Pro preceded both in the international markets, so I don’t really care either way. The Flyte looks like I would expect a 125cc scooter to look. I wish it looked sleeker, like Sym’s Fighter, but I have no bones to pick on the looks front. I think the ladies will like it. What gets me is the build quality and finish, which is miles ahead of anything Kinetic has produced so far. Panels sit perfectly, the scooter is properly symmetric... it’s really quite good. In fact, Kinetic say that after they discussed the parts for the Flyte with the suppliers, they chose to import almost 18 per cent of the scooter (including the aluminium telescopic fork, crankcase and other stuff) rather than risk lower quality products made in India. The localisation of these parts, evidently, depends on whether Indian suppliers can match and exceed Sym’s rather strict quality standards. This, for Kinetic as a whole, is a good thing in the short and long terms. Sym have also led to closer quality control in other processes and the result is that you should get noticeably higher quality products from Kinetic, whether it is Sym products or Italiano-line bikes.

As I’ve said, I rode only for a short while and since I’ve only just climbed off a P220, my performance judgements could be off. So I’ll hold off till the road test for detailed opinions. The engine is refined and almost lazy in feel. Not slow, but like it isn’t making too much effort to get the work done. In the space I had, I gusted up close to top whack, raising only the engine note volume rather than altering the tone. The vario-tranny picks up cleanly, does not judder and yes, I’d say refinement is up to scratch. I didn’t think the scooter was noticeably faster than the competition, but I haven’t ridden an Activa in a while, so the bum-dyno could be off. Handling felt secure and agile, and the ride quality was quite nice too. The center stand on my machine was thumping off the underside over potholes, but again, I was riding a pre-production prototype. The brakes felt really good. Again, while I think a disc would be better, 130mm drums, with grippy tyres and most importantly telescopic forks, work really well. It’s link-type suspension that causes braking problems under panic braking.

The Flyte also has some neat features, like a weird magnetic anti-theft device that’s embedded in the key, a pop-up fuel lid on the front panel and an outside cellphone charger that ensures you only open the seat to access storage, not because your bum’s been vibrating thanks to your cellphone that’s charging underneath. No, I do not speak from personal experience. Kinetic says the storage is ‘brightly lit’ too.
All of this is going on sale and by the time you read this, your Kinetic dealer could have bikes for a test ride and sale (the launch is phased to allow production to catch up). Kinetic are targeting both Pep+ customers – who prefer the lighter, more compact feel of the TVS bike, and Activa customers – who should get a state-of-the-art, feature-loaded scooter with similar or better performance for less money. So it comes as no surprise that the expected tag, Rs 36,999 ex-showroom, is almost exactly halfway between the two. On the whole, I’m impressed with the quality and refinement of the new Flyte and cannot wait to lay my hands on a test bike.