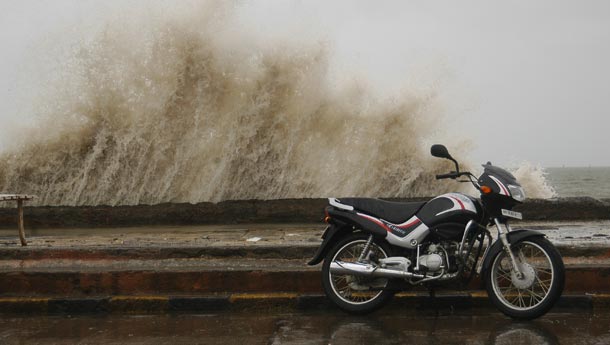 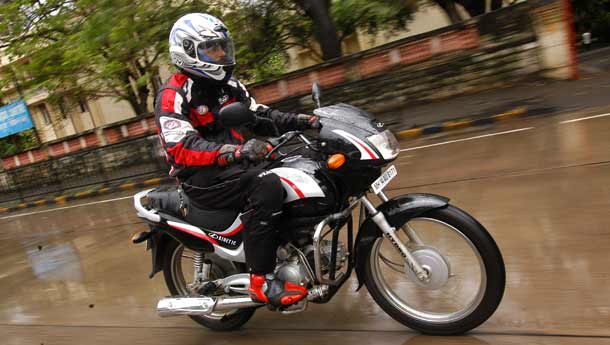 After aeons of scooter news from Kinetic, here comes some motorcycle news. This is the new Stryker, which is lining up in Kinetic showrooms to lay its claim to sub-40,000 bracket 100cc motorcycle money. So, just how good is it?

Looks
The Stryker breaks no new ground in the looks department. Its design remains more or less the same as Kinetic’s older Velocity execommuter. New stickers give the Stryker a new lease of life, while the tank of the motorcycle is wider than most other 100cc machines as is the seat which makes the machine look bigger, more like a 125cc rather than a barebones commuter.

The bikini fairing looks rather contemporary, but look at the bike from the rear and the bulging tail piece isn’t quite as attractive as it could have been. The modern looking alloy grab rail looks neat on a 100cc machine, but not this 100cc machine. There is a bit of a styling mismatch – it’s a case of ‘have component, will fit’. The Stryker comes so loaded with ‘gadgetry’ that it could well be 007’s next commuter – white-backed dials, a tachometer, a fuel gauge, tell-tale lights, gas charged shock absorbers and Yamaha replica switchgear. I said replica on purpose – the quality of the switch gear like the other bits is not up to the mark. And if you haven’t already guessed where the indicator lamps have been borrowed from, they’re straight off the Bajaj Pulsar.

Powertrain
Kinetic’s just oversquare powerplant, the 97.2cc SOHC engine from the Boss, powers the Stryker. The engine develops 7.2 bhp at 7,000 rpm and while riding the Stryker, reaching this magical figure is pretty evident – the motorcycle goes from calm to vibrate-to-bits as soon as you cross peak power. The 0.67 kgm of torque puts the Stryker at the bottom of the chart – other similar sized machines churn out 0.73 kgm or more.

What’s new with the motor? Kinetic gave the Stryker an oil intercooler. It’s a small device, more of a little reservoir, that’s installed above the engine that lets filtered and unfiltered oil mix while the bike is operational. It aids cooling of the oil and is the first of its kind on an Indian motorcycle. In the real world, it’s a marketing driven technology addition, and it’s not going to make that much of a difference on this small an engine.   Ride and Handling
You don’t really get into a Mumbai local train, you get on and hang on for dear life. The Stryker is in some ways pretty similar to a Mumbai train. The seat is a big wide rectangular bit of foam that really doesn’t let you sit in the seat. As a result you’ve got your knees tucked in high above the tank with the low, narrow handlebar to hold on to. The motorcycle is built around a double cradle chassis, with a box-type swingarm, and suspended with gas filled shock absorbers at the rear and telescopic forks labelled ‘Hydro’ up front. Er... I have no idea what the label represents.

I bet you’re wondering how well she corners or how good the ride is? To answer the latter first, the gas units are, frankly, overkill. The ride is stiff but on really bad roads it isn’t as harsh you expect it. It does filter out the worst of it. Kinetic’s declared that the motorcycle’s capable of a 253 kg payload, which is probably the reason for such a stiff setup. So you, your wife, and a year’s worth of groceries won’t have as harsh a ride as I did. And since that’s settled I’ll move on to the first question. I didn’t bother cornering it too hard, as the rear end seemed to step out of line each time. The 2.75/18 Dunlop tyres up front were Mysteriously holding their line while 3.00/18’s were working their Magic to just about keep the motorcycle rubber side down. But you could blame that on the torrential rains in which I tested the motorcycle. So I’ll give it the benefit of the doubt.

The Stryker’s got a 130mm temperamental drum brake up front which could have very well been a disc.  They went the whole hog with other gadgets, didn’t they? You can stomp the pedal to actuate the 110 mm rear drum but I’d suggest going easy as the Stryker is a bit of a tail-happy little motorcycle.

Performance
The Stryker, like most of Kinetic’s commuters, wasn’t built to break quarter mile records, but to consistently return sky high fuel economy figures. Tall gearing on the Stryker sees it accelerate from 0-60 kph in 12.5 seconds and then take forever in fourth gear to get to 85 kph. The plus side to all of this is the 65 kpl fuel economy figure. In the ball park, then.

Verdict
The Stryker is priced at Rs 38,391(on-road Pune) which is almost as expensive as the TVS Centra, and just about a thousand rupees more than the chart busting Bajaj Platina. The Stryker is no urban assault vehicle or super commuter for that matter. However, Kinetic’s optimistic payload claims, stiff suspension setup and mild drinking habits could make this bike very popular in small towns and rural India.