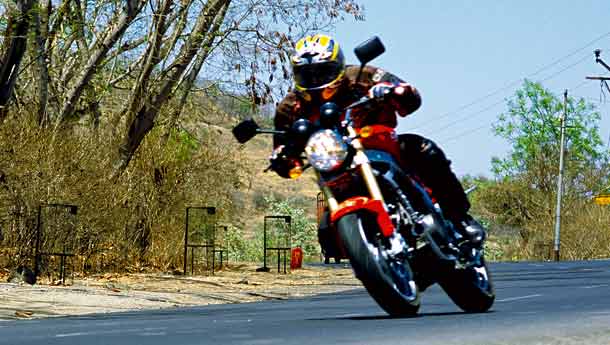 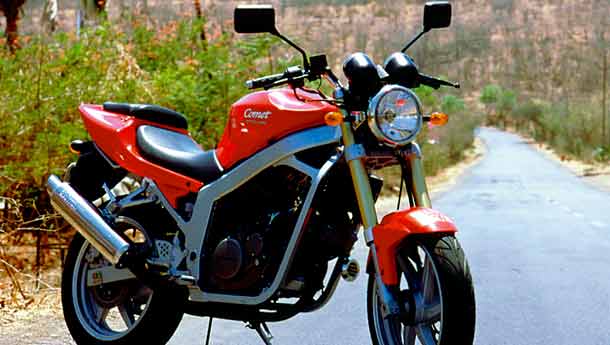 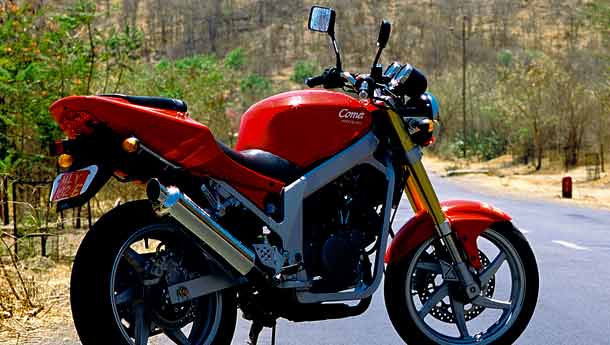 Roads without traffic and bikes with lots of horses can make more magic than David Blaine. So it isn’t a surprise when the Hyosung Comet and I barrel  into an ever tightening  corner at well past  a hundred kph. We thunder out of it, going even faster, and sling shot into the next. The twin sounds like a jet on afterburner. Bliss. Now, what is surprising here is how capable a partner in cornering crime the Comet turns out to be. Domestic violence escalates to assault and battery in the blink of an eye!

Even in slow motion, the Comet would just trundle along at a steady canter, without undue discomfort. But then, that is not happiness, right? That happens when you’re revving the DOHC, eight-valve 250cc V-twin till the tacho needle begs for mercy. The V-twin motor on the Comet comes from the Aquila, and its rev-hunger is as well known as a page 3 celebs’ addiction to publicity. On the Aquila, the motor, though fast, seemed a bit out of character. There is nothing wrong with a bike that can do 120 kph, but who would want to do 8000 rpm all day on a cruiser?

We didn’t need to be Nostradamus'descendants to predict that the motor would do extremely well in a sportier package. And guess what, you’re looking at it. Kinetic effectively did an et voila and threw the keys to one of the first imported examples to us. We, needless to say, had a brilliant day. Familiarity, in this case, does breed a bit of contempt, well at least resentment. The Comet we rode seemed to have its carburetion a bit off. As a result, we got a want-more-throttle judder below 4000 rpm, noticeable vibes between 4500 and 6000 rpm and lots of thrust past 7000, but the response wasn’t crisp even there. If I hadn’t spent lots of time in the Aquila’s comfy saddle, I wouldn’t have noticed anything but the vibes.

The vibes disappear with a good twist of the right wrist and life on  the Comet begins where tacho needles on other bikes die of vertigo. And the surge of power can be seriously addictive. What plays a bit of a spoilsport here is the transmission as you reach for that 7000+ rpm level. Searching for the Comet on-line brings up lots of stories about the cogswapper. You’ll quickly locate monologues dealing with neutral-finding which often read: “I shifted the lever up, then down, then up, then down, then...” We called on Sherlock, who promptly killed the motor, snicked smoothly into neutral, and said, ‘Elementary, my dear Whatson.’   But once you get the hang of things, apart from the length of shifter travel, you have nothing to worry about. Blasting up and down the ribbon of tarmac we chose for the photo session, I never missed a shift. And the V-Twin never missed a beat. Indulge in its desire to rev and it goes so sweetly between 7 and 10 large that you keep wanting to return to that spot and enjoy another injection of adrenaline. And it just wants to snore away below 4000. Just to put that in perspective, there is always enough grunt to make short work of even quickly ridden 150s, but that is like competing with a sedated Michael Jordan in a slam dunk contest. The Comet comes into its own once the pistons, valves and cam lobes are blurred into oblivion, almost banging off the redline.  At which point, the road side spectator will see little more than a red blur that crests the next rise in a flash and is gone.

Actually, he will also notice the whirring whine that mostly forms the soundtrack. The restrictive can allows the Comet precious little by way of a voice. Forget an Aquila-style throb, once the revs are up, the whirr and whine is almost all you can hear apart from wind. There is hope, though. Aussie tuners and Hyosung’s own tuning arm all agree that with a proper can, the Comet sounds da bizness. Not to mention that with the singing voice comes a torque curve with a welcome resemblance to Professor Sherman Klump.

The Comet’s rev-freak of an engine is just half the story. In the corners, it becomes the spandex-wearing, lean and fit Buddy Love. The central attribute of the Comet’s cornering stance is stability. It isn’t especially quick to turn, but with a light front-end, it is effortless. It also seems to enjoy being gassed through the corners. Ride into a corner on a closed throttle, and the front leads the bike to a much tighter line, in effect, oversteering. We did a spot of checking, and earlier road tests all point to a bit of mismatch in the tyre profiles that cause the oversteer. But the oversteer isn’t a problem, it is an opportunity. You end up going through corners faster. In fact, going eight-tenths the Comet feels composed, relaxed and neutral, rather than rushed, nervous and angry. It doesn’t seem to push you, or hold you back. It just does what you ask.
The forward, but wide handlebar gives good leverage for quick flicks, and also helps out in traffic. The Comet is easy to thread through our errant hordes. Where heavy machines become a handful at walking pace, you almost never need to take you feet off the pegs. Even when making full lock U-turns. To answer a question you haven’t asked yet, it won’t be a pain in the butt in traffic and will be quite handy out of it.
In fact, we spotted perhaps the only problem in the package when the road surface went from perfect to cracked and split. The Comet we rode was feeling over-inflated, with a firm but bouncy ride quality. Once the pressure’s correct, the ride remains firm, perhaps too firm for our B-roads. The bike judders through well enough, but broken B-roads, where a bike like a Pulsar would be schmazzing away without a care, the Comet rider would probably have to slow down somewhat. Bring out the perfect roads though (and we’re getting more of those by the day), and the Comet is more playful than a puppy full of caffeine.

The ergonomics package doesn’t look comfortable, but actually helps on longer rides. The rear-set pegs and the sloping seat make you lean naturally forward to the bars. The bars aren’t mounted too low, so the weight on the shoulder on the wrist is just a fraction more than normal. The Comet is also quite spacious, allowing you to slide all the way back to the step in the seat or, hug the tank like it’s the last time you’re going to see it. To wit, after a 150 km ride into Pune, I spent a good hour and a half in the saddle at speeds from 5 to 130 kph without triggering the tiniest of aches.   What can cause pain, potentially, are the brakes. I mean that in a good way. Hug the tank tightly with your knees when you begin to squeeze that lever. For if you aren’t ready, the Comet will slam your jewels into the tank and you’ll be hopping about like a angry Kangaroo. The single rotor is a sharp number and bites sharper than a starved piranha. This sets the front forks diving forward and the first bite is immediately followed by the rest of the school which demolish the last chunks of the speed. Under panic-braking, though, the Comet’s front-fork was chattering away like a giggly teenager, which forced us to back off a bit.

This, motorcycle enthusiasts, is a nice, likeable and quick machine. And it looks as good as it goes too. We’re not averse to ducking behind the trusty to-each-his-own sign when it comes to criticising styling. However, there’s no need for it here. If I must, and I’m deeply nit-picking now, I’d point to the matt plastic bit under the tail lamp and go ‘yeww’ softly. The Comet looks great. The fat, sculpted mass of the tank, the brushed top triple clamp, dominant twin-spar frame and those cool soft-gold upside-down forks are as attractive as a PYT in a low cut dress. This could be your own mini-Monster, even.

Which brings us to the make or break question. Will you get to own one? Kinetic’s official stance at this time is that they haven’t decided yet. They asked us about it and we said yes, over and over again. But that isn’t the complete picture. You see, a fairly reliable little birdie sang a different tune and we report:  Kinetic is stalling for time and delaying publicity. Meanwhile, they’re asking Hyosung to let them have Comets, as many as three times the Aquilas numbers. Kinetic is working towards a sub-2,00,000 price and the bike should be in showroom by June. The selected cities rule will still apply. But, given the larger number coming in, bike-loving diamond traders in Surat shouldn’t give up hope - the list of cities will probably go up. The bike will be yellow, red or black. Now don’t blame us for not gathering ‘important’ information!

Birdie did seem to make sense. It will be easier to homologate the Comet since the power train is the same as the Aquila. The same fact would also make service training quicker and easier. ARAI’s only potential trouble spot are the tubeless tyres the Comet comes with. Indian made tubed tyres in 110 and 150-sections for 17-inch rims aren’t impossible, but they will adversely affect the handling.

Would I buy one? I’m really tempted. The price seems reasonable for a 30 bhp sports naked. And if I buy now, by the time the next 250 comes out, I would probably have finished paying the instalments as well! Will Kinetic bring the bike? We’d wager a yes, but even David Blaine doesn’t have a clue.