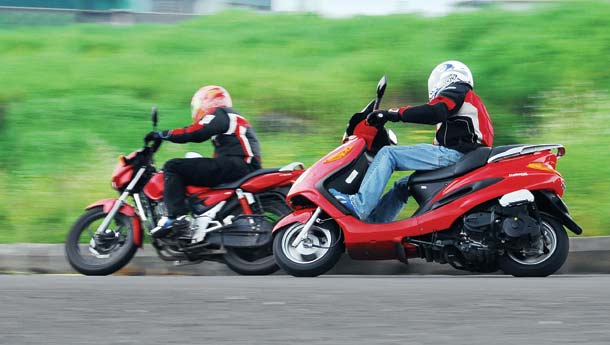 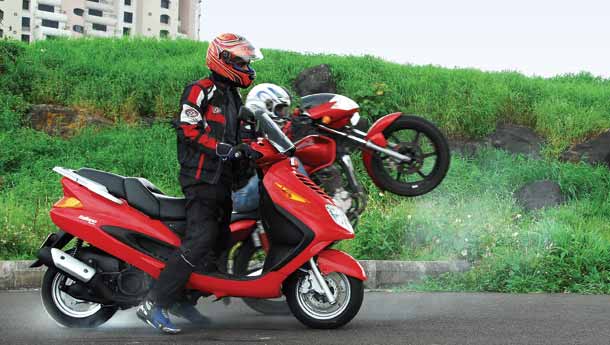 This is not a test. This isn’t even a straight, head-to-head comparo. This is an exploration of formats. A ‘here’s how you pick between apples and oranges’ sort of deal. The first of them, and potentially the most boring, is the commuter. If you leave out the price angle, the Hero Honda Glamour FI is the epitome of Indian commuting motorcycles. Enthusiasts may differ; and they may even be right. The Discover may be far, far sportier and involving, and the Gladiator might be the more complete package by the length of Sriperumbudur’s main straight, but the Glamour FI has them beat. To cut a long explanation short, commuters are expected to be appliances with great economy. Period. Everything else (sportiness, packaging etc) is a bonus). Plus, it is without a doubt the most technologically advanced commuter on the market right now.

The second of the cookie cutters is the Kinetic Blaze, which is a maxi scooter. In a very real sense, it’s India’s first such machine. It breaks the notion of the tiny scooter with a tiny, frugal engine and offers a spacious station for the rider, with a fairly powerful engine to keep the scenery blurred properly. It also represents a noticeable step forward in terms of handling prowess, rider involvement and yes, even an upmarket look and perception. And new in this test is the disc brake version you see here. It has only just become available, so we threw it straight into the frying pan.

The third is the TVS Apache, which represents the proficient, enjoyable, highly capable 150cc class of Indian motorcycles. There are, admittedly, more powerful 150s abroad and so forth, but our unique Indian blend of performance, economy, fun and price are hard to beat.

As you would have noted, the Glamour FI is not in the pics. We were unable to get a test FI in time for this shootout, though we did manage to mooch a privately owned Glamour FI from a Hero Honda owner and managed a rather skimpy photography session.

What we set out to do was to see how these three formats rub shoulders with each other. Indeed, to establish whether they rub shoulders at all and whether there are places where only one will do. Or, to establish that our bikes are so versatile (think of them as non-specialised, if you like) that classifying our two-wheelers is an inherently futile exercise. To figure this slighty abstract proposition out, we decided to identify riding situations where one ‘type’ should clearly perform/fit better than others and see how (badly or well) the others fared. That should give us the perspective we’re hunting for, right?

To clear the performance air right at the start, the TVS Apache is the quickest and fastest of the lot here and by a fair margin. Its twin resonators ensure that low-end, mid-range and top-end performance are far ahead of the other two, and neither the Blaze nor the Glamour FI can keep up with it in most places where the throttle can do the talking. The Glamour FI is, in turn, quicker than the Blaze despite its smaller, fuel economy oriented motor but is slower on top speed by a bit. The Blaze picks up speed more... erm, gently because of two reasons. One is the variomatic transmission, which is never going to match a full manual, and the other is weight. Still, near-silent, effortless 80 kph cruising and a wildly exciting 110 kph indicated top speed (really closer to 101) is good fun.

To help ourselves familiarise and to kick the test off, we started with the most tedious part of the test: traffic. Profiency in traffic is a function of balance (so you don’t have to keep putting your foot down at low speeds), low-end torque (so you can smooth out the stop-go in, say, second or third gear, rather than having to resort to herky-jerky first), rideability (being able to stay in a gear for the longest possible time and still make good progress) and refinement (if your bike doesn’t sound like it’s falling apart or about to explode, it tends to calm the rider down). And this is where we were expecting the Hero Honda Glamour FI to be supremely impressive. Our test in the August issue made that pretty obvious. The fuel injection system is completely glitch-free and runs with the smoothness of a greased tyre on glass. Delivery is linear, the feel from the throttle is crystal and the response is super-crisp. I tell you, this fuel injection business will get us some really responsive machines. Since there isn’t any great jump in power, just a smooth flow of thrust, the GlamFI is effortless in 0-40 kph, stop-go traffic. Stick it in second or third and most of the sub-40 work can be handled like it is an automatic. The refinement and serenity are of a class where you can’t help but imagine the chaotic mess in the background as the GlamFI’s natural habitat.   In comparison, the Blaze is a surprise. It’s a bit tall for really low speed work and the small wheels don’t help. In traffic, relatively new riders will find themselves wanting to keep their feet dangling - never good for progress. Or balance. Especially in tight, slow turns and u-turns. While not having to shift up and down is a boon, it’s only in steady, (even if low) speed situations that the Blaze feels nice. The Apache, in the same situation, feels a bit fidgety and maybe a bit too eager to get on with it. It is compact, so you can make good on smaller gaps and all of that, but it would rather run faster on clearer tarmac.

Once traffic begins to open up, the Blaze begins to look better. It’s quite happy with open, fast traffic and feels damn good at steady town speeds. The 40-70 kph range is effortless (although it could have been quicker still) and keeping up and getting past traffic is a cinch. Its ride quality feels cushy, and the little back support from the seat step feels very comfortable.

And the Kinetic feels even nicer if you have just stepped off an Apache, which feels comfortable until you get off. Then, for a short time (while it regains it curves), the butt feels like a board. To give credit where it’s due, Joshua’s been repeating this since our first ride days, and I now reluctantly agree. But that aside, the motorcycle feels awesome. This is, after all, its ideal environment. The Apache’s throttle produces the better surge (thanks to more power) and quicker passes. However, the Apache’s peculiar chink in the armour is its springy ride. Again, it’s not a format specific problem, but the Apache does tend to bounce a bit over certain kinds of undulations, which is a bit unsettling. In open, fast traffic stretches, still decidedly in the urban environment, the Apache is a clear leader, but not by a mile. The Blaze is surprisingly good, and working a smooth commute from a sofa is a good place to be.

Once you leave urbana where it belongs - in the rear view mirror - the Blaze absolutely glows. It isn’t fast enough to be the greatest of highway weapons, but it is effective. It is 200-km-at-a-go-comfortable, quiet, and will easily hold 80-90 kph indefinitely without stress. Ride quality and the seat step allow you to settle in and sweeping corners are handled with an eager, trust-inspiring stability. Just watch for crosswinds, okay?

You get to the next town faster on the Apache, without a doubt. But you’d get there feeling fresher on the Blaze. Although, it must be said, the time difference will allow the Apache rider to freshen up before Blaze-man rolls in.  The TVS, on the other hand, is quick, has the power for efficient overtaking, and the grunt to hold a 95 kph cruise. It still feels a bit fidgety - part of this is the ride quality (although heftier riders report no problems on this front), and the other is the short wheelbase - a bit of a worry in crosswinds and slipstreams. There is also the niggling feeling that slightly more rear set footpegs would do wonders for the ergos.

Then there is the ultimate challenge for a motorcycle, the mountain road. A place where apexes lurk, waiting to be hunted down. In this group, the Blaze, with its bulk, height and wheelbase, is the hardest work. Its centre-stand scrapes everywhere and it is the hardest to hustle along. It’s a laugh, all right. But it is work.

The Apache is a bloody maniac. It’s flickable, we’ve established that, and it is in these sort of situations that it begins to fall into place. It is the S-shaped piece the mountain roads were missing. Tiny wheelbase, compact, sporty dimensions, a grunty engine... it all comes together. You’ll slice and dice like nothing in this group can. And this is the sporty side of our 150s. A side that has percolated down to some of the 125s, but remains firmly a 150 trait. If your office and home were separated by a bunch of hills, you wouldn’t have
to think twice.

So, what have we learnt? Er... not much. While we keep saying that commuters are the most versatile of motorcycles, we’re clear now that they’re not. Ninety per cent of our riding is urban, and that they do with aplomb, but the rest of the ten per cent will require at least a more specialised motorcycle.

However, there is still the cost angle to consider. You see, all of the three you see here cost roughly Rs 62,000 ex-showroom Mumbai. As a commuter, the GlamFI would be hard-pressed to justify its tag. Yes, it’s easily the most refined of the trio and all of that. But that’s still one eye-watering price tag. That doesn’t mean it isn’t a good motorcycle,  just that it’s the first of its kind, and that achievement arrives carrying a rather heavy rupee bundle on its head.

As a scooter, the Blaze’s price is a bit steep too, at roughly 17,000 bucks dearer than a 100cc basic scooter. Still, it’s perfect for long-ish commutes through light traffic, posing next to the nightclub and even offers your better half a peachy perch to, erm, perch on. And it has no competition right now, either.

Finally, the Apache. Rs 62,715 for a proficient 150cc machine is good pricing. And the fact that all of the 150s are priced closely is a good sign too. For your money, you get a bike that can actually do pretty much everything the other two formats manage. And adding the fact that it has the most performance per rupee in the lot means that we’re always going to be leaning towards them. And justifiably so, don’t you think?