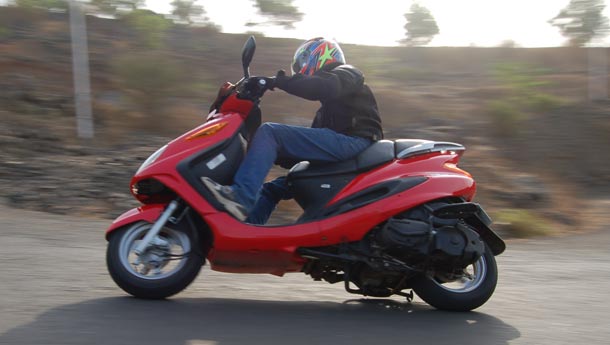 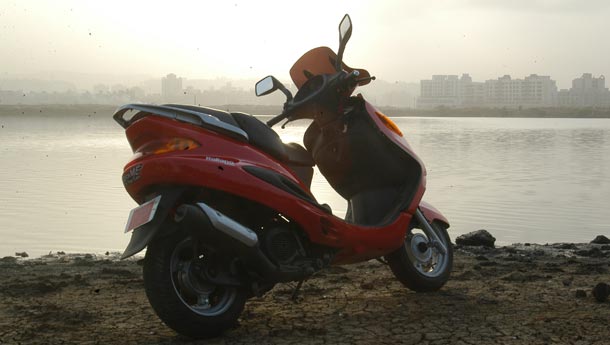 What can I tell you that you don’t already know about this scooter? Well, for starters I could tell you that it does a 0-60 kph run in 10.2 seconds. That it’s pretty comfortable on good roads. That it still doesn’t ride as well as it should on bad roads. That you get to the underseat storage by twisting the ignition key beyond the ignition slot (one genius here pried the seat open to fill fuel). But the biggest thing in the Blaze’s favour is that finally here’s a scooter that I, a hard nosed motorcyclist, don’t mind as an option to a humdrum motorcycle.

And why not? After all, it is the biggest and most powerful scooter this country has ever seen. It also happens to be the first scooter with a disc brake, the first to get a four-valve engine and for whatever it’s worth, it also happens to be the first scooter to get a tachometer and handle-bar counter balancers. And as long as we are staking claims, let me also mention that it happens to be fourth biggest two-wheeler (on account of engine size) in the country. At this point I should also mention that the Blaze happens to be unlike anything that we’ve ever seen and until it becomes a regular at the traffic lights, it does have the ability to capture eyes and cling on to them.

Then there is the small matter of price. At 55,000 bucks, the Blaze is at loggerheads with the Pulsars and the Apaches of this world. Not to mention that at this price, it’s even a few tempting EMIs away from a fully loaded 125. But there is something more to this scooter which even today most motorcycles don’t promise. You see, the Blaze looks and feels like a comfortable scooter that can transform mundane commuting to touring. In fact, every time you sit on the nicely cushioned front seat with your legs outstretched, you get a sense of riding out into the sunset, even if you are just on your way home. Honestly, that in itself is reason enough to buy this scooter.

However, it isn’t all good here. You see, the downside of the Blaze’s size is that even though the 165cc, 11 bhp motor does get the scooter moving rather quickly, the Blaze is soon panting its way to its 101 kph top speed. On our acceleration runs, the Blaze hit forty kph in just 5 secs, but the next 20 kph took another five. That means it is actually a couple of seconds slower than the Hero Honda Glamour. And the Glamour isn’t a quick motorcycle by any stretch of the imagination. The good thing though is that the Blaze does feel quicker than it actually is. Refinement levels too are up to scratch and on good roads comfort levels are brilliant. In terms of fuel efficiency, the Blaze will stretch a litre of fuel over 38 kilometers if you were to be gentle with it.   Hit a broken stretch of tarmac though and the whole experience heads south. Ride quality on the Blaze is still an issue and if your commute involves a slightly over-used road, you will be happier taking the bus. Or even the Glamour. The Blaze fails to absorb any kind of bumps at any speed and on a comfortable scooter like this, that’s rather a shame. However, if your commute involves corners, the Blaze is good company to have. The rather wide 130/70 R12 at the rear provides ample traction and the Blaze takes to corners as confidently as any motorcycle. Okay, make that a decent-handling motorcycle. It also enjoys sweepers as much as a teenager enjoys a giggle and this fits into its touring persona quite naturally.

So then is this the first touring scooter in the country? Well, not exactly. Firstly, the Blaze is slow, or at least slow enough for you not to have much fun on it. However, a power upgrade (they could call it the Blaze plus) is all it really needs to become an inter-city scooter. And since we are talking upgrades, brakes are the one thing that Kinetic should upgrade right away. Over the entire period that the Blaze was on test with us, it always ended up stopping at least an entire bike length ahead of the distance we expected it to. If you have already flipped for this scooter, make sure you get one with a disc brake – this one’s a no-brainer.

As it now stands, the Blaze is in a league of one and it seems like that won’t change for some time to come. Besides, when manufacturers these days are busy building scooters for women, here’s one that can stand up for the boys.

As a scooter, the Blaze really doesn’t have a parallel. The real question here is ‘Would you buy it over a motorcycle?’ Well, let me put it this way. Here’s a scooter that doesn’t have high quality as its highest virtue. Bits do fall off, occasionally. It is adequately refined, is as comfortable as a motorcycle on any give Sunday and goes about its business with a bit more style. However, it’s slower than any of the 125s and less fuel efficient too. But in this case, the Blaze is different enough for numbers not to matter and that seals it for me in the scooter’s favour.