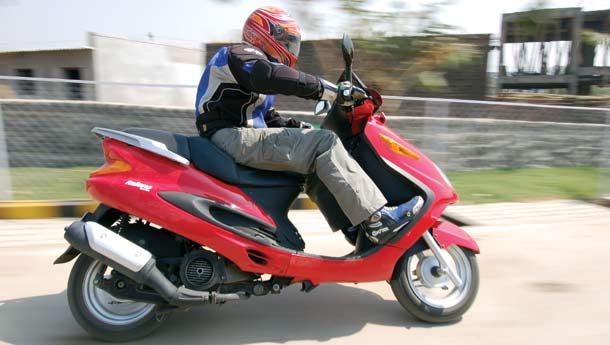 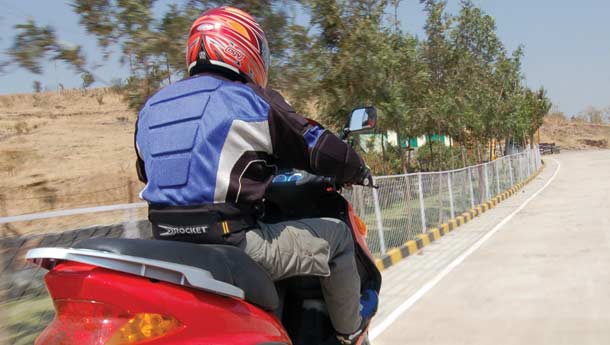 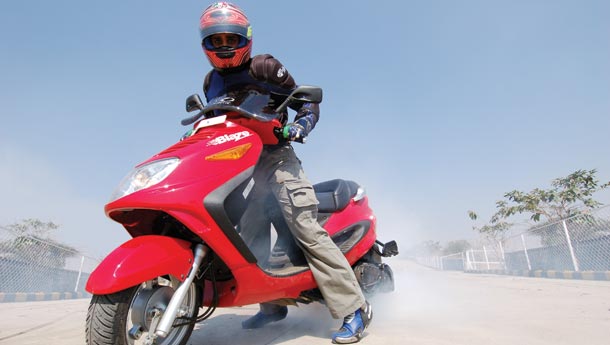 The road opens out as we exit the bend and brings up the sort of landscape that makes you beg for a 10 mm lens. The sky is stretched taut as far as I can see, the road plunges into the valley like a revealing neckline and I’m about to follow its nosedive. The ribbon then unfurls upwards, as straight as Harrison Ford, shooting over the brow of the next hill. Tarmac is framed perfectly in a rolling green-brown carpet.

The problem is I am on a scooter. Long, straight roads and scooters mix about as well as water and granite. Scooters are too slow to be exciting on stuff like that. Their sparkling manoeuvrability becomes as inviting as salted beer, or worse.

But I’m still smiling today. And that’s because I’m riding a Kinetic Blaze. Instead of a piddly urban runabout, I’m in control of a full-size (or thereabouts) 165cc scooter that can push along quite nicely, thank you.

I have a moment to consider another super-wide lens moment, before the road dissipates into a dark grey squiggle. I’d reconsider my speed and intent if I were on a smaller machine, but today I don’t have to.

On my side, I have telescopic looks, twin rear shocks, sticky Dunlop 120/70-17 tyres at the front, a mini-gumball 130/70-17 at the rear and a anger-red scooter that says, ‘Come on then, push it some more.’   So I do. The Blaze corners with a confidence that is er… confidence inspiring. Slam it into a corner and despite the unnecessary provocation, you don’t end up fighting a top-heavy ship with not enough power to pull through. Instead, the Blaze leans right over, and continues like nothing untoward happened. With your feet propped up into the foot board, the scooter seems to pivot around the hip point (rather than the contact patch) and feels planted. It seems to find its own groove and then sticks to it like a slot car.

And unlike a motorcycle, it does not require body-in bike-out positioning, extra weight on the front crouching or any such contortion. You flick into a corner still holding the La-Z-Boy posture, feel the traction and roll further on to steam out of the corner.

I don’t think I’ve quite enjoyed riding a scooter this much. Except for the Yamaha T-Max 500 and the Yamaha YP250 Majesty... and the Italjet Dragster... and the Gilera Runner.... enough! Okay fine, this is among the more enjoyable scooters I have ridden.

To get to this highway, I had to wade through traffic. The Blaze does not seem unduly out of place there, either. It is big, but space management becomes second nature fairly quickly and I never had a chap honk because I cut it too close on the overtake, even on full volume hustle. The engine’s power delivery is pretty linear and the twist to go ratio is a straight line. Most of the time, come to think of it, I didn’t notice the engine at all, which I think is a good thing.   The engine, we believe, is based on the GF-series engine, but with a galaxy of tweaks. It sounds nothing like the motorcycle and is in fact quite refined, sober and understated.

On good roads, that is exactly how the ride quality comes across as well. The Blaze absorbs the high-frequency small-amplitude irregularities without a murmur and feels very cosseting and smooth. But in India, that sort of composure doesn’t last. So when the roads go bad, unfortunately, the ride quality heads south on our Blaze. The silent cocoon becomes a shuddery place to be in, with bumps threatening to upset the scooter. Even after I slowed down, I wasn’t convinced that the bad road ride quality was perfect yet. However, Kinetic assures me that it was an issue with the prototype I was riding, and the final-spec machine we’ll be testing next month will be a marked improvement.

Then again, I wouldn’t worry about the ride quality of this scooter. If you’re thinking long-ish rides on half-decent B-roads, you’re just about in the ball park. This is the scooter for near-perfect roads like the Chennai-Pondy ECR, or the NH17. But perhaps what I liked most about the Blaze is the way it felt. You sit in the rider’s seat with a wide seat step instantly supporting the lower back. Feet get tucked up high in the footboard cutouts and arms hang lazily from the bars midway between a normal streetbike and a full-style cruiser. It’s a comfortable position to hold.

So I did just that for almost a hundred km. When I finally returned the scooter to Kinetic’s Pune premises I’d figured out two things. First, that’s a lot of scooter for your money (insist on the optional disc, you won’t ever regret the extra three grand you shell out). Second, I want one for a long term test, heh heh. BSM