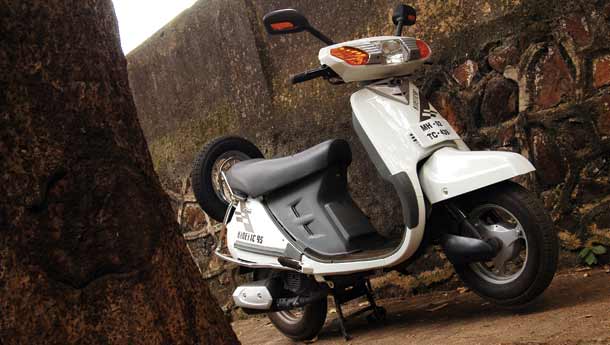 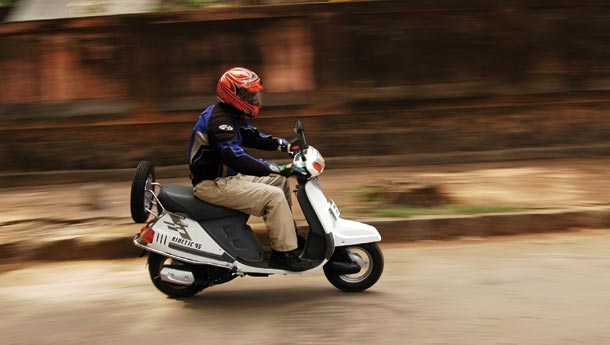 No, no, no this is all wrong. There seems to be a horrifyingly prolific (per)mutation machine at Kinetic’s R&D facility that appears to be controlled by Wes Craven. First there was the re-stickered scooterette that stole the nostalgic Kine name. And now it’s this monstrosity. The poor, long-running, all-time favourite Kinetic ZX/DX/XX/BX/PX has completed its tour of duty. And like poor Yossarian, Colonel Cathcart keeps raising the mission limit. Instead of a graceful retirement, the poor multi-X is being flogged and flogged, until it will fall over one day, a tired heap.

Or at least that’s what I thought, when I heard of the Pune manufacturer’s latest caper. With Nova 115 sales dwindling rapidly in the face of the altogether superior Nova 135 (and the nosedive in two-stroke scooter sales), Kinetic decided to kill two birds with one stone, one of which I really liked. Sheesh, I keep using these quasi-witty lines to keep the flow of the story.

Anyway, upshot: Nova 115 four-stroke motor + Kinetic ZX equals flashy new Kinetic 4S. Well, that effect is a bit lost. Styling that was cutting edge a decade or more ago is now as blunt as the handle of an axe. It looks old, passé and out of the loop. But not ugly. In fact, the 4S is still prettier than some pretty outlandish styling packages we’ve had to bear recently. Some of the familiar cues of the ZX are still around. The jangling of the starter still wakes the motor, and its idle note is very similar to the old two-stroke. But with a hint of clutch judder, the 4S takes off smartly enough. In fact, the performance seems very similar to the old two-stroke, although I suspect a stopwatch would probably prove me wrong.

Around corners, the Kinetic doesn’t seem as confident as the new generation of scooters, but remember, more than a few of us cornered these till the tranny cases wore out, so they do manage quite well. Ride quality is a bit bouncy, but not a lumbar disaster by any means. More to the point, I entered this story imagining a horror-show of Oscar-winning proportions. On that count, I was disappointed. The Kinetic 4S is odd, somewhat like a Nokia 5110 with an mp3 player. But like the old 5110, it is still effective. More importantly, it retains most of the original honesty that we so liked.

One more mission, Yossarian. I promise.