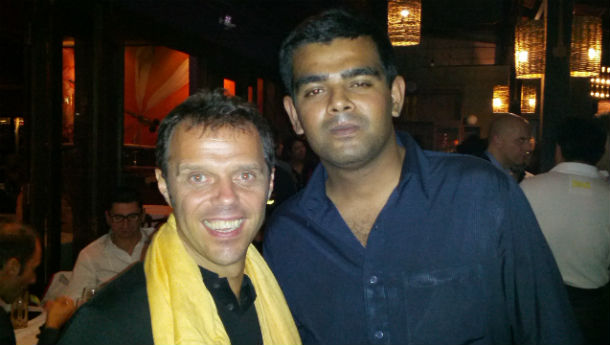 I still can't believe it happened. The odds were entirely against me, I was lying low in a hospital bed down with viral fever, and yet, with good luck on my side, it happened. No, I'm not trying to tell you about some midnight college escapade which ended in a lot of drunkenness and me losing something essential. To put it real quick, I've just returned from the maddest, fastest week of my life.

I saw Valentino Rossi, missed posing for a picture with him, met Loris Capirossi, did get a picture with him, gaped at the chiseled-from-steel hands of all the Moto GP riders, watched the MotoGP race live from the Sepang grandstand on the main straight, bought lots of motorcycle stickers, gulped down gallons of chilled ones and danced away to 'Gangnam style' at every given opportunity. Deep breath. Rode the 848 Streetfighter... and the 1199 Panigale S at Sepang, with Loris Capirossi and Troy Bayliss (and other Indian motorcycle scribes – amazing guys, all!), got a million knee-downs, impromptu wheelies, a moments reflection at turn 11 (that's where Marco Simoncelli decided to part with the mortals last season), 250 kph down the back-straight, more knee-downs, 270 kph down the main-straight, eery late-braking tactics, snappy handling, twitchy throttles... I can go on and on and on.

So I will. The last time I rode on a racetrack (which was also the first ever time I rode on a racetrack), I was astride a 9 bhp, 110cc, Honda CB Twister. No disrespect to the motorcycle, but you have to incredibly stupid (or lidless, perhaps) to get the motorcycle to kill you. I was anyway roughly twice as heavy as the riders around me at Chennai, so despite my racing instincts set to 'maximum', I couldn't help but finish last. Or was it second-last? I have no clue or inclination to find out.

Now imagine the contrast. I'm on a motorcycle that has more horsepower than the Twister has ceecees. I'm on a track that is host to not only motorcycle racing but also Formula One. I'm riding with people who have had more race starts, collectively, than the number of words in this blog. And yet, once the momentum is set and the visor, down, nothing comes in the way. Fear? A bit, initially. But since fear is only psychological and motorcycle-riding is purely spiritual, metaphysical and even sexual, the throttle hand won.

As a result, my unfamiliarity with the concept of a 'racing line' now more exists. My left-side knee-slider has lost its virginity (the right-side slider is well-scrubbed already), I'm already looking forward to elbow-downs, and I think I desperately need lessons in modesty. As if that weren't enough, I've already signed up for four consecutive track-days, two each at Sriperumbudur and Kari.

Life, I think, is back on track.