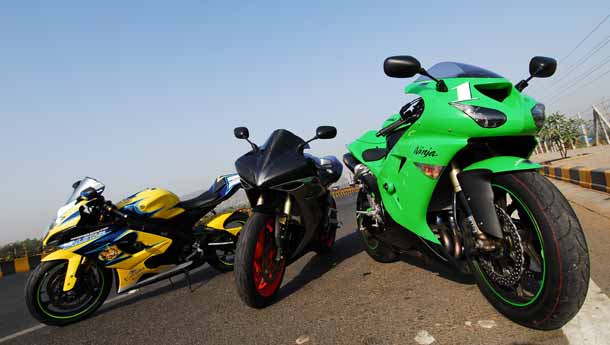 If I were the editor of this magazine, I’d have a litre-class bike shootout in every issue. And no number of we-can’t-take-this-anymore letters would make me change my mind. Yes, they’re that addictive. If the FinMin found out just how addictive they were, I’m sure he’d instantly slap on an addiction tax and hike it at every opportunity. So let’s not tell him, okay?

There’s a number of reasons why these tiny 1000cc inline fours enter your bloodstream so easily. There’s the near-200 bhp power output, of course. They appeal to male riders in the same way as Carmen Electra and personally, they look better than the lap-dancing-to-stay-fit diva on any day. And most importantly, this is as close to riding a ballistic (and I mean that word in all its various connotations) missile as I will ever come. And that is one of those experiences that belongs right on top of the must-do- before-you’re-30 type lists men’s (and women’s) magazine tend to print up every so often.

Of the three machines hunkered down on the blacktop today, you’re already met Prasad Diwadkar’s 2006 Yamaha R1. It’s very far from stock, of course, with a Power Commander, the umpteenth exhaust system and too many little bits to mention. You’ve also read about Vivek Jaising’s superb Suzuki GSX-R1000, but it’s shed its standard Suzuki white-blue-red scheme for a more effervescent Corona Extra Suzuki replica paint (Zubin – +91-98203-25593 – has done the excellent paint and sticker job). Again, Vivek’s added a bunch of stuff, including a camera-mount for his growing series of Jaising Goes Mental vids (at performanceracingstore.net). The new, well, kid on the block is the Kawasaki ZX-10R of 2006 vintage – a particularly good year to let the good times roll – which belongs to Rahul Prasad, who’s recently returned after a long stint abroad, and has yet to figure out two things – why Indian authorities paint lane markings which no one uses and what Indian drivers and riders do with their indicators.In one way, all the three are similar to ride. They are all way too fast, far from rational and completely ‘wrong.’ Ride any of them and it’s almost as if you have become the flame front of a never ending explosion. The speedometers are a joke. The numbers scurry around like a nursery school on caffeine. You’ll never read anything clearly off these digital units. And opening the throttle the second time round is like your first bungee jump – an infinite loop of should I, shouldn’t I. The best bit? You can ride all three like an automatic. Really. First on all three is good for 160 kph. It’s just like a scooter... except for the tendency to keep leaping up into frighteningly spontaneous wheelies. I didn’t mean to, really.

The ZX10 might look as proportionate as a porpoise in the pictures, but believe me (and me – Pablo), it’s a hell of a lot better looking when you’re standing next to it and trying to mooch the keys. You’ve got to be nuts to have one of these for a daily ride. And as is fairly evident, there’s no shortage of nuts. What’s an appropriate way to say, ‘I sh*t in my pants, pray?’

Looks wise, I’m still an R1 fan, although both the other bikes have a brutal beauty that’ll suck all the air out of your lungs, shove it into their pressurised airboxes and claim two intensely personal bhp on top via ram air.

The Gixxer looks loud and very capable, while the hardly less subtle Kawker is just amazing. Even tinier than the other two somehow, it looks lighter, more lithe and somehow even more ready to go out for a burn. The Kawasaki, in fact, looks so small that if it had a carry handle, I’d swear I could carry it as cabin baggage. But it isn’t what you’d call pretty, or even a design icon. It’s a bit odd to look at, although I must say (And I concur emphatically – Pablo), it looks a heck of lot more eyeball worthy in the flesh. From the rear, the ZX-10R’s rear tyre looks quite a bit fatter than the other two – I almost cracked an inappropriate Yo Mama joke...

Take them out for a spin, and even experienced road testers will need hours to tell them apart. The sheer might of the engines outshines the superb chassis packages, and all the technology that lurks under the fairings. Read an international road test, where this kind of performance machinery is a more normal event, and they’ll tell you that the Gixxer beats all comers by miles. That the R1 is the most streetable of the lot, and very credible on the track. And the ZX-10R is a Dobermann with the deportment of a Rottweiler. It’s sleek and menacing and not averse to biting off the lazy or inattentive hand that feeds the throttle. But I am not in a position to make any of these rather fine distinctions. At 24,000 frames per second, vision and many other perceptive faculties pack up and leave. All that is left is speed and a wobbly piece of jelly on the back of the motorcycle. Any more adrenaline and I’d OD and pass on into the white light, throttle still WFO...

And then there is the sound. Three sets of aftermarket cans. Tubes of exotic materials designed with the express purpose of setting free trapped horses and their glorious voices. The Gixxer’s Racefit can is stubby and incredibly loud. There’s a rasp to it on the open throttle that will set off the hair on your neck. Which is great, because Vivek’s last can was a handmade race-only titanium thing that could be heard for miles. And if you rode alongside Vivek for ten minutes in those days, your ears rang for days on end. The R1’s new Graves cans give it a loud, but mellow, more ready-to-pounce sort of a rounded wail. It growls its pleasure at the opening throttle and amid traffic noises, it sounds like a powerful subwoofer. The ZX-10R is fairly similar but at a higher volume. The superbly crafted, all-carbon Akrapovic cans look very sweet and sound glorious. If I were the romantic sort, I’d probably say something about it singing folk songs about internal combustion and performance. Okay, I’ll shut up about this at this point. The only thing that tops the aural abilities of each of the three bikes is the three being flogged on at the same time. Then, you are transported to another place altogether. The noise has the same effect as listening to Pavarotti sing Nessun Dorma at the Staatsoper in Vienna. Only hornier.

Well, enough poetry (Shumi tends to use heavy words rather loosely, no? – Joshua) I say. For those who came in late, all the three bikes sport 998cc inline four motors. All the three motors are supercompact and have power outputs touching or exceeding the 170 bhp mark (claimed, at the crank) with about 5 or 7 bhp coming in on top from the ram air effect. A trend that  started with the R1 was the stacked gearbox and now all of them sport this. In brief, the gearbox cluster is moved up and behind the engine, below the intakes, to make the motor more compact, which in turn allows the chassis doctors to place the engine in the desired place for best handling balance. All three bikes sport radially mounted callipers, with the Kawasaki sporting the only set of Wave rotors. Upside down front forks are also standard, with the Kwak and the Gixxer sporting a super slick DLC (Diamond Like Carbon) coating on the stanchions for lower stiction and quick response to road irregularities. For 2007, the bikes have evolved still further, sporting slipper clutches, variable intakes (R1) and rider controlled ignition maps (Gixxer). All this engineering goodness is packed tightly into a small package – just a bit larger than the Karizma – that weighs in at about 170 kg dry. Which, astoundingly, is about 20 kg heavier than the Bajaj Pulsar 220. Which is why these machines are so single-mindedly reality altering.

And I am about ready for another fix. So I quickly mooch the keys to the Gixxer, take a long look down the deserted highway and set the dials for another time warp. God knows when the ride turned illegal, I’m only sure it was within microseconds of flipping up the dinky sidestand. Well past 200 kph, I can’t even hear the wind. The only sound is my brain, screaming, ‘Slow down you idiot, slow down you idiot.’ But I’m not listening.