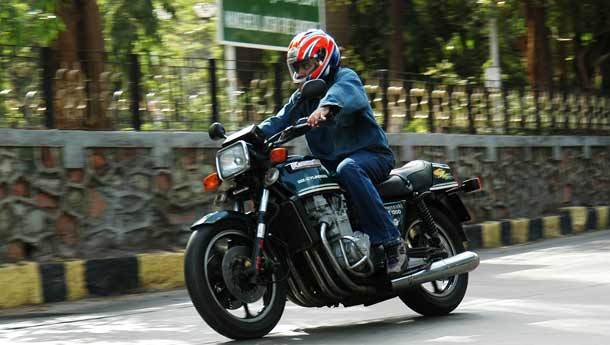 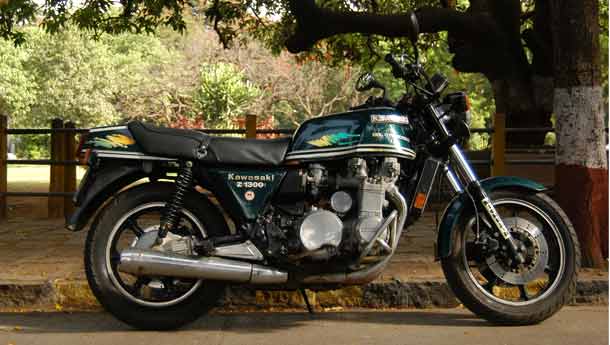 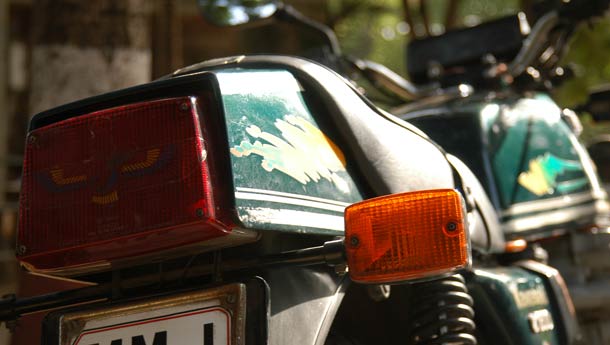 I am going to begin this article with a spot of medical terminology. Don’t raise incredulous eyebrows, I assure you that what follows is entirely relevant. Now, I’m assuming everyone knows what a hernia is. For those who don’t, it is a rather uncomfortable state of affairs wherein one’s intestine pops out of its normal position and protrudes visibly against the stomach wall. This usually happens when you try to lift something extremely heavy without adequately tensing your muscles and flexing your knees – try and jerk a 100 pound dumbbell off the floor like that, for example, and your intestinal cavity will suddenly have some real estate to spare. Multiply that figure six times and you begin to get a rough idea of what the Kawasaki Z1300 can do to you if you don’t treat it with respect.

The behemoth in question belongs to Freddie Turel, a person whom most readers will probably be familiar with. The superbly restored Rudge Whitworth we featured a couple of issues ago was his too, and you will remember that he is the quintessential automobile nut. He’s had the Kwacker for almost ten years and, if you can believe it, learnt how to ride it along Dadar Parsi Colony’s leafy avenues. To give you the full import of that achievement, he mastered the art of motorcycling on a 300 kg, 1,286cc, 120bhp, six-cylinder hippopotamus that develops 11.8kgm of torque and is capable of 230 kph. It’s a bit like saying ‘I say, I’d rather like to learn how to sail’ and then going out for a bit of practice on the INS Vikrant.

When Freddie first showed me the bike, I almost popped a double-hernia just looking at it. As my insides twitched nervously, an involuntary guffaw escaped through my mouth; you know, the sort where your mind tries to grapple with the situation and you’re thinking ‘What the ?!’ The thing was big. No, it was huge. Oh, the hell with it – it was humongous multiplied by immense to the power of six. I was willing to bet that if I stood near it long enough, I would develop a six-pack through osmosis. It was also undeniably handsome, in that typical early-eighties-all-rectangle fashion. Here was a motorcycle that growled ‘You lookin’ at me, punk?’   Look they certainly did, when Kawasaki stunned the viewing public at the Koln motor show in September of 1978. Although beaten to the streets by Honda’s equally loony six-pot CBX1000, the Z1300 made every other motorcycle in existence seem minuscule by comparison. It was over six inches longer than a 750 Triumph twin of the same era, for example. It weighed 115 kg more, had four more cylinders wedged across its frame and produced nearly three times the horsepower. It was designed to take no nonsense and kick multiple butt. The press was introduced to the bike in November 1978 and everyone was unanimous in their praise of both the styling and performance of this groundbreaking (in every sense of the word) new machine. In spite of its weight, the Z1300 had no trouble launching itself into rapid motion and became an instant classic.

I asked myself what on earth the Kawasaki bosses were thinking when they okayed the proposal to build this blunderbuss. At first sight, it seemed like they had had a lot of metal to spare that year and needed something to put it all into. But then I realised that the period from the late sixties to the seventies was the one of the most eventful in motorcycling history, as the application of new technology increased motorcycle performance manifold. Multi-cylinder two-strokes with ever-larger displacements, large-displacement four-strokes with DOHC engines, all this and a veritable avalanche of new technology changed the face of motorcycling dramatically.

Kawasaki were one of the main instigators of this revolution, with asphalt-rippers like the two-stroke H1 triple and the mighty four-cylinder Z1. Other manufacturers also built a variety of large-displacement high-performance machines, fuelling an escalating horsepower war the likes of which motorcycling had never seen. A brief cessation of rivalry was called in October of 1972, due to the OPEC-induced oil crisis. The emphasis was now on fuel efficient, environmentally friendly engines and early victims were two-strokes and large-displacement four-strokes,which were seen as politically incorrect long before the term came into usage.

In spite of all this, the Z1 continued to sell strongly, as a growing legion of hard-core fans found themselves unable to kick the high-horsepower habit. Realising that demands for high-performance supersport bikes still existed, in 1974 development was quietly begun on a new flagship model to replace the famous Z1. After much discussion, during which V-fours, square-fours and V-sixes were suggested, it was decided that the new machine would be powered by an in-line six – Kawasaki’s first attempt at building a monster motorcycle engine.   It was certainly big on everything, but what was it like to actually ride? I swung a leg over the seat, a procedure not unlike clambering over a wall. Gripping the wide handlebars while my guts pleaded ‘Easy does it!’, I somehow pulled the bike off its side-stand, settled in the ample seat, thumbed the starter and felt the hair on my neck rise as the six gargantuan cylinders said hello. A civilised ‘snick’ into first and I was off. Contrary to my earlier visions of toppling over like a demolished building, I found that the bike was surprisingly easy to manoeuvre at speed. A quick blast and I was hooked: the smoothness of the engine, the savage pick-up, the seamless flow of power, the booming exhaust note – it all made for a brilliant motorcycling experience. Cornering, as I discovered while repeatedly circling a roundabout for photos, was a different matter. The bike was about as aerodynamic as a 2BHK apartment ( and just as heavy), so I had to exercise great care. According to several reviews, it actually behaved itself when cornered reasonably
hard, but I wasn’t about to find out for myself.

‘Why?’, I asked myself again. ‘Why would anyone buy a six-cylinder ode to excess like the Z1300?’ It drank enough petrol to cause climate changes on its own, it couldn’t corner, it didn’t stop very well and you could go just as fast on a bike less than half its weight. The answer was because, like Everest, it was there. The very fact that you could buy a monster like this and give everything else the finger made petrolheads line up in droves to sign on the dotted line. It was probably an anomaly even in its own era, let alone today’s politically correct times, but I’ll tell you one thing – it roared in and startled the daylights out of everyone. For that, bless every one of its six cylinders.

SIX ON THE BRAIN

The Z1300 was introduced in 1978. In 1983, it was given a digital fuel injection system and was called the ZG1300. Power output went up by 20 bhp and mileage improved marginally to about 10 kpl! In March of 1983, a fully dressed tourer called the Voyager was launched. It featured a fairing, panniers, top box, stepped seat, digital speedometer, radio/cassette deck and on board computer for trip and fuel calculations. The Voyager was a big hit with serious touring riders despite being priced higher than the competition. After a twelve year production run, Kawasaki’s first liquid-cooled six-cylinder motorcycle was phased out in 1989, having sold around 25,000 units.