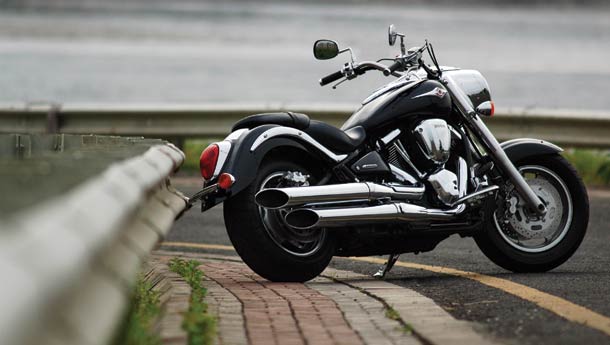 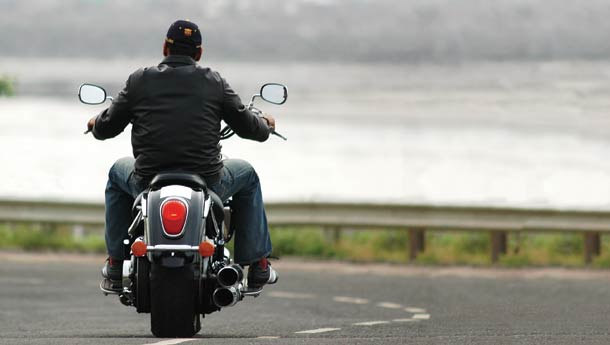 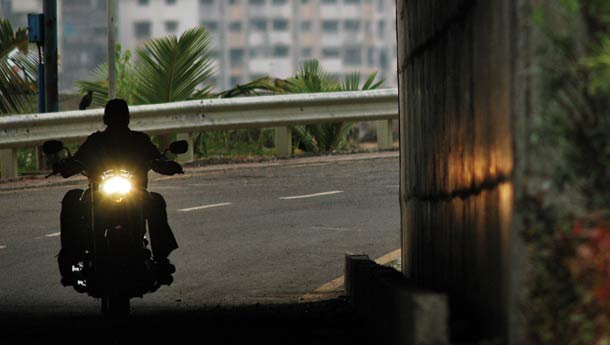 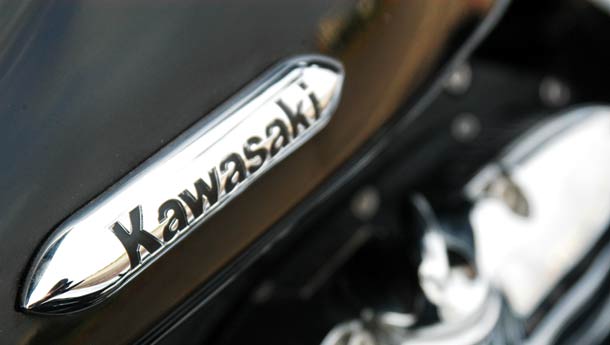 An involuntary groan escapes my lips as I try to lift the Kawasaki Vulcan VN2000 off the chrome sidestand. It doesn't help. The bike remains obstinately aided by gravity, parked just off the vertical. Damn! When Kawasaki profiled the potential VN2000 rider, they obviously weren't considering weaklings like me. Or for that matter, lanky five foot eleven road testers – now that I've put all my weight into it, it's come off the stand, but I can just about reach the tip of the chrome sidestand, not enough to flick it up.

As a steady stream of invective builds in my throat, I wriggle past the sidestand, and to my utter dismay, I cannot find the key. I look on the sidepanels (Yamaha Road Stars have 'em there), under the steering head (various other cruisers). Then, the owner Sumesh Menon points it out, right on top of the headlamp. The tiny key is at sea in the horizon-filling vista of chrome that forms the top surface of a truly immense headlamp. I should probably make that lamp cluster, for the outsize oval includes a regular high beam and three projector lamps!

Before I thumb the starter, let me tell you a bit about Sumesh. We featured him most recently with his glimmering troika of Harleys. Obviously, he has moved on. Back then, he was proud of Milwaukee metal. Until one gloriously bright day, when he happened to slide into the saddle of the VN2000. At idle, it spoke gravely with a genuine V-twin beat, had pushrods and presence and more chrome than the middle east has oil. On the move, the 2053cc V-twin – the largest in production at the moment – turned mature riders into blabbering idiots. He just had to have one. Now, Menon can't imagine why he had the Harleys. 'I hate to call them that, but they're sluggish. And this bike is just so...'

What he leaves unsaid isn't hard to fathom. The V-twin produces as much thrust as the Saturn V rocket. Official figures are 17.9 kgm at a lowly 3,350 rpm and there's more. 13.5 kgm is on tap from idle to the redline. The superb V-twin even makes 100 bhp fifteen hundred rpm beyond the torque peak! The 409 kg (wet) VN2000 will thrum past 100 kph in four seconds. At the quarter mile, a little more than twelve seconds would have elapsed and the speedo would read an astounding 160+ kph – remember, this an eight-foot machine weighing 400+ kg.   Getting on, I thunked loudly into first (to be expected from a cruiser, not a problem or a sign of less than perfect refinement). And believe it or not, the Vulcan is by far the best-sounding V-twin I've ever laid ears on. Pardon the un-pretty pic, but I mean it. It isn't really loud, but the steady rapping of the motor is brilliant. And while it isn't loud, you'll hear it. It's like they say, when you're saying important stuff, you don't have to raise your voice.

As I gassed it, it became only the second cruiser to pull my arms straight, flatten my coccyx into the seat step and leap ahead like a cartoon character, seriously underplaying its impressive performance on the weighing scale. When I felt that I was at the top of the torque curve, waiting for the horses to kick in, the
V-twin slammed into the redline with the intensity of a train wreck and demanded the next gear. Awesome!

Sumesh, ever the calm rider, has the another perspective, 'Yeah, it's fast. But that isn't why it's so special. I grew up wanting only a bike, the highway and piece of blue sky. The 2000 keeps up with sportier machines, but can lounge at 20 kph with more authority than anything that ever came out of Milwaukee.' I have to agree. Ever scared of pulling slow U-turns on big machines, I found myself going over almost to the rubber clad footboards in broad, sweeping, even graceful arcs.

This character has impressed the international motorcycle press too. Every Vulcan test has at least two paras dedicated to how the heavy flywheel, low slung mass and sheer weight-centered stability of the VN2000 makes it easy to pilot at low speeds. They also note how steady and accurate it remains when speeds and lean angles rise. And they all appreciate how the VN2000 – as Sumesh puts it – 'sticks like chewing gum.'   Despite the prodigious torque flowing down the toothed belt, the dark mass of the 200/60-R16 rear tyre never loses traction. Whatever the engine makes is delivered to the tarmac instantly, still oven fresh, as it were. A motorcycle with a 1750 mm wheelbase would, or rather, should have a lag between throttle and thrust. To give you an idea of how long the motorcycle is, here is what happens when you squeeze the brakes. While you cannot really feel the front contact patch, the VN2000 stops very well. When you let off the brakes, the entire front end rises. And that's when you realise that the huge chromed front forks have actually dived on the brakes. Credit is due to the Kawasaki men for taking what should have been a telegram and turning it into efficient telepathy.

What we haven't actually spoken about are the looks of the machine, which are a huge part of the cruiser equation. The first time you see the Vulcan VN2000, you cannot help but notice how large it is. The length is further exaggerated by the low profile, and the seat height is an astoundingly low 690 mm. That's about where my knees are at.

More importantly, it wears its weight exquisitely and looks all the better for it. There is lots of chrome, but it has been placed with an artist's touch, rather than with a broad, slap-happy paintbrush. The simple air-cleaner cover wears a subtle, but daunting, '2000' badge which speaks volumes in the space of four digits. The chromed bottom-end, alarmingly large twin exhausts and the sexy curve of the rear fender stays are all executed with flair. And they tested poor Pablo, who struggled to shoot them without himself starring in each of the detail shots.

Sumesh, at six and a quarter feet tall, makes the machine look simple to handle. He's at ease with it, and backs it up, turns it around with practised skill. When I had to do the same, I couldn't even get it to budge. But then he would – he practices taking the damn thing off the side stand every morning. 15 reps of 3 sets... now do it again.   Techometer

Kawasaki seems to have woken up and remembered how they did business. Occasionally, they would turn the business on its head, move goalposts and reset enthusiasts' expectations. They punched the lights out on everyone with their demented two-stroke triples. Then they tripped up Big Red's superb CB750 with the Z1 (and they're both in this issue as well!). And now, they've rediscovered the art of giving the competition the finger once again.

In 2004, the rumoured two-litre Kwak cruiser became full-blooded reality. The 2053cc engine became the largest production V-twin on the planet from a major marque. Kawasaki claimed 19 kgm at 3,000 rpm and 116 bhp at 5000 rpm, at the crank. All carefully designed to thrill the rider, not overwhelm him. Lord knows that would have been easy. Suddenly, a 1700cc Yamaha Warrior was a pithy middleweight!

To keep the massive motor (imagine the height of a 1000cc single) within the low-slung package, Kawasaki opted for pushrods to power the eight-valve lump. After all, the 10 cm piston was travelling a full 12 cm! Overhead cams couldn't have been squeezed in. The single-pin crankshaft keeps the V-twin beat intact, while twin counterbalancers and rubber mounts dampen vibration. On the bike, you sense that the massive engine's turning over, but don't get numb from the vibes.

A semi-unit five-speed transmission completes the cruiser look and uses a Harley-style belt drive system. Kawasaki used a dual throttle valve fuel injection system to ensure that on-off throttle transitions remained sweet, despite the excessive variations in torque flowing through. And then they bolstered the system with an adapted 'cush drive' on the output shaft to further smoothen the power delivery.