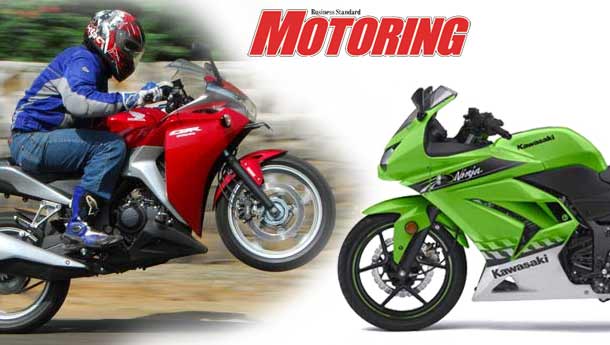 Although comparing these two motorcycles is akin to pitting chalk against cheese (one is a twin, the other a single), the both exist and compete in the same segment and hence this . So here goes

1. The Ninja 250 R is the first low capacity twin to sell in India since the Kinetic/Hyosung Comet and Aquila. The Ninja 250 R is powered by a liquid cooled, 4-stroke, parallel twin, 249cc motor that puts out 32.5 bhp@11000 rpm with a torque figure of 2.24 kgm@9500 rpm. Power is transferred from the engine to the wheels through a 6-speed gearbox.

2. A higher powerband of the Ninja's engine makes it much less friendly in traffic than the CBR. Torque comes in a little later than the CBR and hence, the Ninja seems slower from standstill.

3. As they say, there's no substitute to cubes. A larger displacement of the Ninja helps make more power and alongwith its lower kerb weight (152 kg), the Kwacker is both quicker and faster than the Honda.

4. The Ninja has a more committed riding position. While this provides for a great track day experience, daily riding in and around the city can be a bit of a pain, especially for taller riders.

6. The Kawasaki is the costlier of the two and is priced at Rs. 2.9 lakh in Mumbai.

1. Despelling all rumours of this bike being a twin before its debut in Thailand, the CBR 250R is actually powered by a liquid cooled, 4-stroke, single that displaces 249.6cc and makes 25 bhp@8500 rpm with a torque figure of 2.3 kgm@7000 rpm. Just like the Ninja, the CBR's engine is also mated to a 6-speed gearbox.

2. With the power and torque coming in early with the CBR, the Honda is friendlier in the city at lower revs than the Kwacker, making it live up to its claim of being a sports commuter to the fullest.

3. Although not as quick or fast as the Ninja, the Honda is definitely the more frugal of the two.Â

4. The CBR has a more upright riding position. Your legs are less bent back while your back is less crouched - great for every day city commuting.

5. The CBR 250R is available with an ABS-equipped variant as well - a great aid for lesser experienced riders.

6. The Honda CBR 250R has gone on to do something that was thought impossible till now - a sporty liquid-cooled fully faired 250cc motorcycle that is priced under 2 lakh rupees. The CBR 250R has done just that, with an Mumbai ex-showroom price of Rs 1.7 lakh, that too for the more expensive ABS variant.