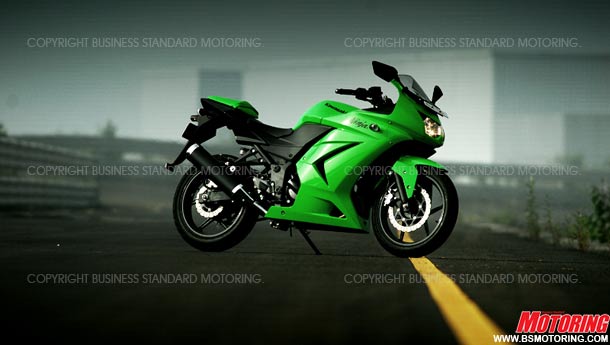 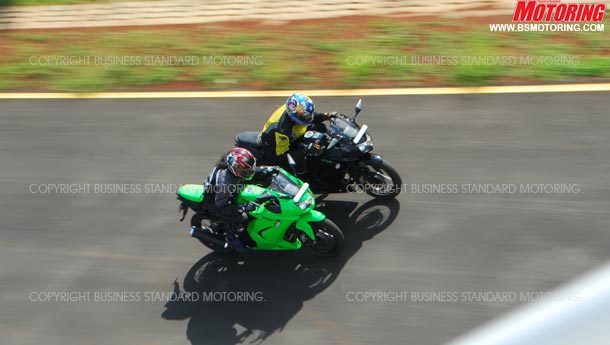 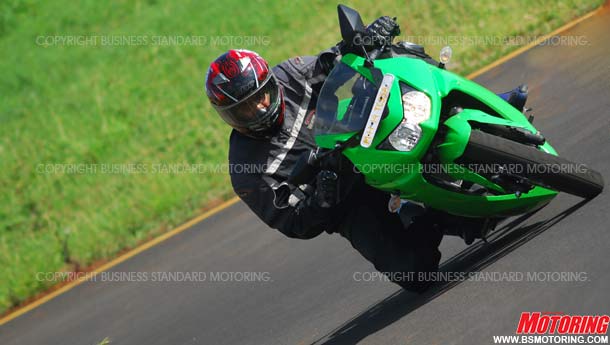 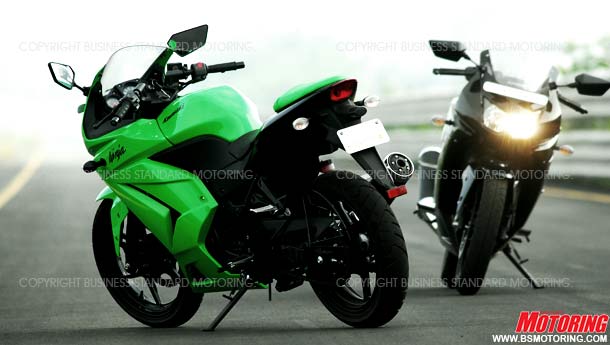 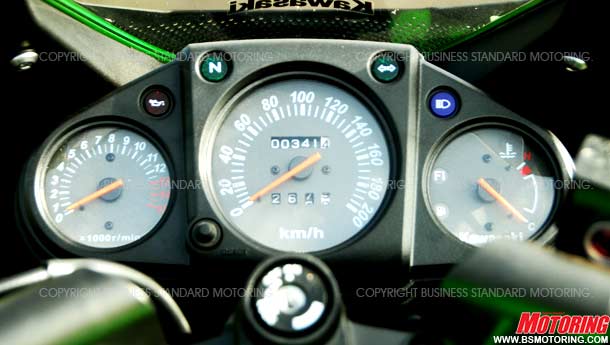 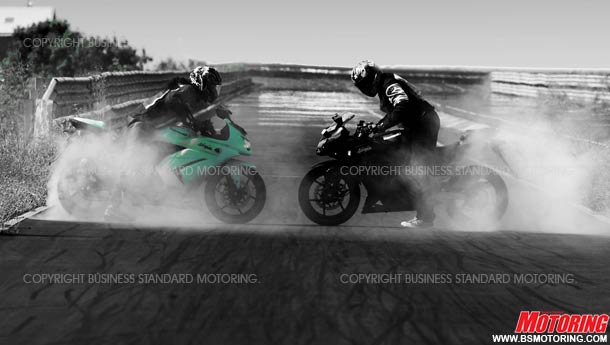 As I fired up the Ninja for the first time, the sound at idle was a bit underwhelming. But one solitary redline twist let loose that typically-multi howl and put a smile on my face. The clock ticked a few times and I found myself introducing virgin knee sliders to the beckoning tarmac. Briefly at first, but as the Ninja egged me on, for seconds at length, the longest grazes in the history of my life. And between corners I couldn't help but give myself imaginary pinches. Indian motorcyclists have waited for this bike to arrive forever now, and here I was having the time of my life, confirming the Ninja's arrival in India. Red letter day in India's motorcycling calendar? You bet!

Ninja. Say the word aloud a couple of times. It's got a certain something to it, doesn't it? For normal folks, it might conjure up images of a black-clad masked fighter in the dark, invisible to the eye, except for a glint of metal aimed solely at drawing blood. For motorcyclists, the word symbolises a breed of legendary mad machines that have become part of motorcycle folklore. And they can't be anything but that green. Kawasaki is responsible for making that seductive hue of green synonymous with the word 'ninja.' Never mind that no self-respecting covert Japanese warrior would be caught dead clad in that shade.   Ninjas were feared for their ability to blend into their surroundings and hoodwink enemies. But the 250R makes no pretenses towards stealth. Quite on the contrary, it flaunts its flawless silhouette that blends together a host of eye-catching details, enough to make you want to get on one and go tear up your favourite set of roads. The way the angular lines and the scoops merge is stunning, and you'd have to be an insensitive bugger to find fault with the way it looks. The rakish theme is everywhere - the front mudguard, the mirrors, the headlight, the fairing, the tail section - they all look like they have been carved using the finest katana, the ninja's weapon of choice. The exhaust is just right, not too skinny and not too fat, hung by just the right amount of angle, while the tail section is suitably minimalistic in keeping with current sportsbike styling trends.

And at long last, no commonplace five-spoke wheels. Perhaps it's just me again, but the wheels remind me of shuriken, the deadly ninja stars that were often found lodged between the eyes of those who dared to cross the ninja's path. The instrument console has opinions divided over it, with many thinking that it doesn't go with the rest of the bike. I love it though, and I will always prefer graceful analogue meters over spasming digital numerals. Though if I have to nitpick, there should have been a proper fuel gauge instead of just a fuel warning light.   Lapping the Bajaj test track with the light on and no idea of the amount of fuel in the tank, it wasn't long before I ran out of aromatic hydrocarbons, though it was conveniently right at the pit entrance, saving me from pushing the bike back. Good thing, as I suspect even a ninja would find wearing riding gear and pushing the bike under a hot sun quite a task. For a change, the 250R turned out to be a rare, merciful ninja.

Ruthless and cunning, ninjas were renowned for their rigourous conditioning that endowed them with exceptional physical abilities. The 250R is not shabby either. It's got a heart that sets the standard for small displacement motorcycles in India. The 249cc parallel twin flexes its 32.5 bhp and 2.24 kgm of muscle and you feel it every time you blip the throttle, even at standstill. The Keihin fuel injection system's dual throttle valves provide the pistons with their sustenance, with throttle response being as immediate and accurate as a ninja's sword thrust. Though peak power is rated at 11,000 rpm, the DOHC four-valve-per-cylinder layout means that the 250R revs well beyond its 13,000 rpm redline, with the gentle limiter reminding you that the party's over as the needle pecks at the number 14.

Dragging the little Ninja on the straights provided a satisfying surge of acceleration, with an extra kick post-8000 rpm releasing most of the power from the twin. It howled to 60 kph in 3.4 seconds, while the tonne came up in 8.6 seconds en route to a top speed of 149 kph before I ran out of road. By all accounts, once you're done with maxing out the six-speed 'box, slightly over 160 kph is what the 250R will be slashing the air at. Even the most hardened ninja would spare a nod for the kind of performance that the little 250 twin has to offer.   The skill and finesse with which ninjas operated left opponents wondering what had hit them. The Kwacker too is fleet-footed in its behaviour and at the same time it offers high levels of stability as well. The reason for this is the tube-section diamond frame that is suspended between 37 mm forks and Kawasaki's bottom-link Uni-Trak monoshock at the rear, while the 110/70 and 130/70 17-inch IRC tyres stick to the road like they are ninja-style suction cups. Turn in is fast and once into a corner, fast or slow, the Ninja remains rock solid. Changing lines mid-corner is entirely possible in a safe manner, if you feel like evading imaginary arrows being shot at you, and you would probably never guess that the bike weighs a healthy 172 kg. Braking is similarly excellent, with the 290 mm front petal disc setup advising you whether one finger is good enough or finger number two's assistance is required.

Behind all tales and myths, the legend of the ninja is all down to one thing - they were devastatingly effective. They were good at everything and they did everything in style. And that holds true for the 250R too. It raises the bar for performance motorcycling in India by a substantial amount without even trying. After all, it's not for nothing that the Ninja 250R is the largest-selling 250 in the world. Many have learnt their sportsbike basics on this little Kwacker and even after buying a ZX-14R, there's a good chance that they've kept their baby Ninja. All's good then, right? Well, almost. You see, since the bike comes via the CKD route, there's still a hefty amount to be paid as tax, which adds up to around a Rs 2.9 lakh price tag for Mumbai. I've got half a mind to send a few dozen ninjas to the policy makers to see if they'd like to do away with the infinitely stupid duty structure that we have in India. To add to our (ok, my!) woes, Bajaj is highly unlikely to localise content for the 250R, which means the price won't be reducing any time soon. Our only hope is that enthusiasts flock in droves to their nearest Probiking showrooms and it sells enough to make Bajaj consider reducing its price tag to more accessible levels. That said, I still think that if you choose to buy it, the Ninja 250R will be worth every rupee you'll spend on it and it will be all the bike you'll need to get around on our roads. If you still think that the price is too much, I suggest that you submit yourself to a spin on the 250R. I believe you will discover that the magic of a green Ninja is something that you can't put a price on.