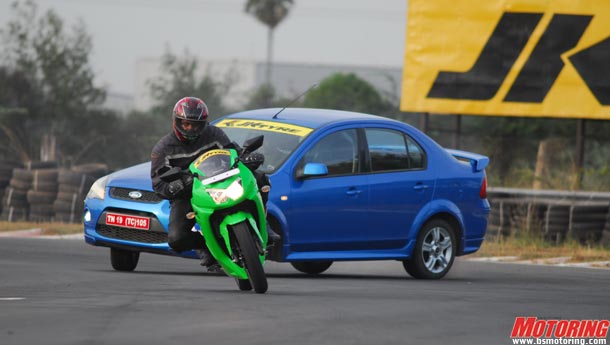 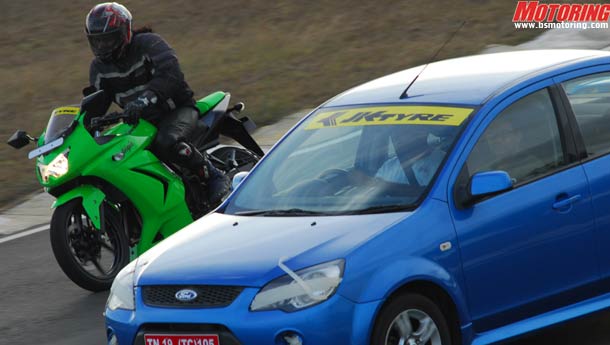 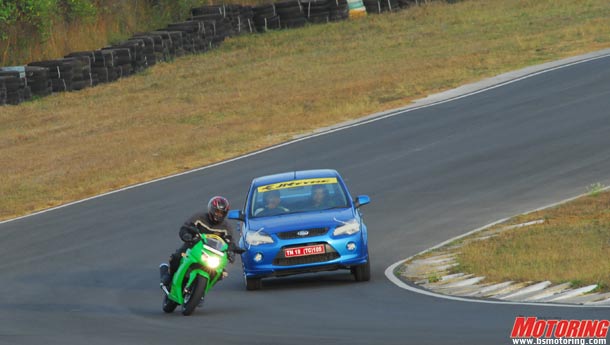 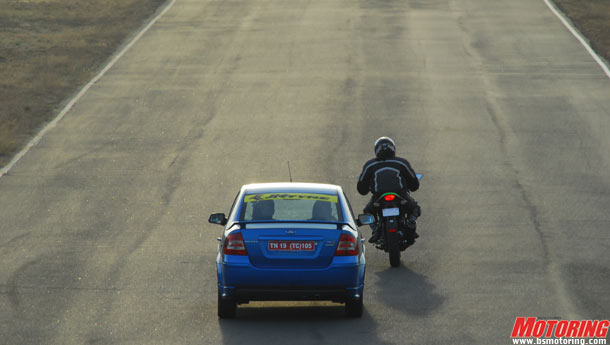 THE HEAT OF THE MEET

One in green. The other a dapper blue. One on two wheels, while the other's on four. Everyday machines, but conceived to be more than just that.

Some use their bikes and cars as commuting tools. But then, not all rides, or for that matter, drives, have to be cutlery-boring. What if someone wants comfort and practicality as well as the agility and shove to keep it away from performing like a commode on the track?

If that someone is you, look no further. Bajaj and Ford have kept a person just like you in mind when the Ninja 250R and the Fiesta 1.6S went on sale - two machines that offer a healthy balance between sense and sport.

This is not a face-off between the two. Drivers love their cars while riders love their motorcycles. But this is for those who would like to stick their heads out further - those who want a motorcycle to accompany a car in the garage and vice versa.   HOT CIRCUITS

The lean, mean and green Ninja was a blast to ride around the Sriperumbudur race way. With a little more than 32 Japanese horses willing to do your bidding when you crack the throttle, there is definitely enough power to make a track day fun.

As the men from Kawasaki who designed this machine had envisioned, a typical Ninja owner will, in all likelihood, ride his machine exclusively on public roads. The suspension is more road biased, set up to comfortably absorb potholes and ruts. But then, we aren't exactly that bloke, and to us, the Ninja seemed to be a tad soft, especially at the rear end.

But the Fiesta takes another look at the same game. On paper, it's fit to seat 5 adults and swallow luggage. In reality, however, it can take in four with the fifth being a figment of somebody's fertile imagination. Air-conditioned and fitted with power windows and power assisted steering, that's all the pampering you're getting from this Ford.

Ride quality is brilliant and so is steering feel. But the suspension can feel quite on the harder side on anything but faultless tarmac - perfect for a whale of a time on the track. We actually drove to Chennai from Mumbai in the Ford and it took all those 1,400-odd km with great aplomb.   And then, the blue Ford put in some track time. Just the right dose of steering feel and good power from the engine, coupled with taut handling, kept reassuring me that I was in control. When you're behind the wheel of the 1.6S, you begin to realise that driving it on the track is a homecoming of sorts to the Ford. It handles the way it does because the 1.6S has been subjected to numerous hours of hard driving on this very speedway.

The Ninja is a very forgiving machine. It takes a lot of skilful stupidity on the rider's part to unsettle this Kwacker, much unlike its predecessors that earned sadistic respect as being machines with a vicious temperament. The twin-pot motor's power delivery is linear and smooth while the riding position will accommodate even the largest of riders. Although the foot rests are more rear-set than not, they won't cause your knees to cramp and ache after smashing through half a day of track-bashing.

Similarly, the Fiesta isn't the sort of car that makes you grin when you actually want to howl with pain. The driver's seat holds you in place, which is great since sloshing all about inside the car ought to be the least of your concerns. A good shifting cog-box adds to that racer feel, while you downshift and prepare yourself for the next corner that's closing in fast. Find the ideal line, power up that inline-four and before you realise it, the corner's history. You've nailed it!   Not that the stock Fiesta 1.6S was a disappointment on track, but I would have loved to see what the ECU remap and the high-flow air filter that we had fitted on our long termer Fiesta would have felt like here in Chennai. Those two mods alone had contributed nearly 10 horses more, along with a substantial increase in torque output as well. So as you can see, there's a lot that you can do to the Fiesta to make it take to the track with a renewed vengeance.

Just like the Ford, the 250R has tonnes of upgrades designed for it in the aftermarket performance parts bin. Brands like Two Brothers Racing and the like will happily sell you exhaust systems that significantly increase the Ninja's potential on the track. If the stock bike's such a hoot to ride, I can only imagine what the hopped up green goblin would be like!

The next time you're in the market for a bike and car that compliments your business suit and thinks like your racing overalls and leathers, these are the very machines you ought to be looking at. They don't cost the earth and there's plenty you can keep adding to them to keep your interest on the boil. Besides, life's short anyway, and you really ought to bake the cake and eat it too! Oh, and in case you haven't noticed, the Ninja's best in green while the blue really makes the Fiesta 1.6S stand up and grab attention.