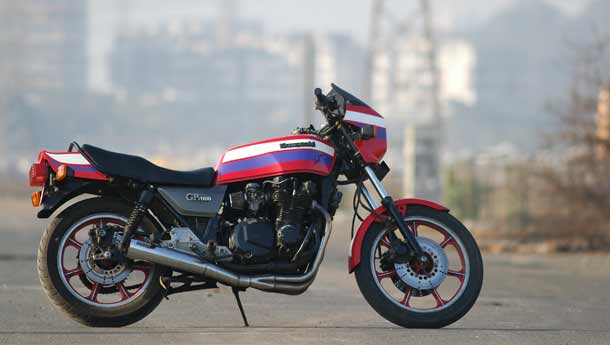 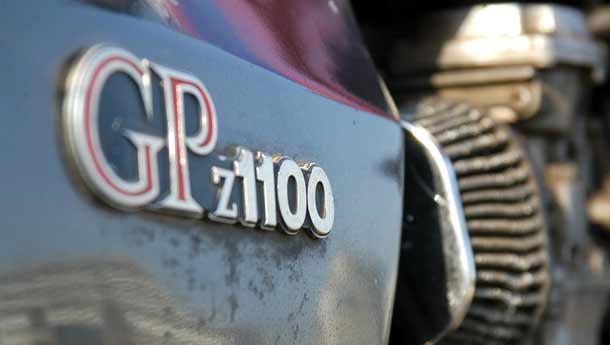 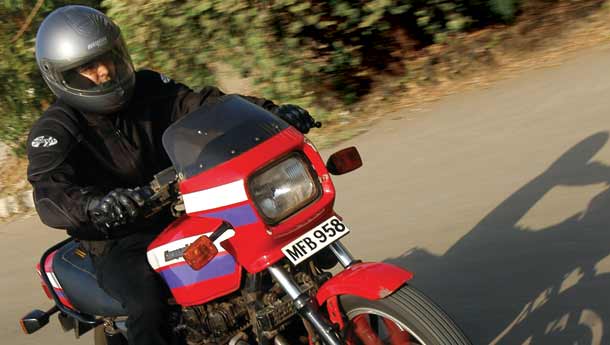 The bike you see in these pictures is the Kawasaki GPz 1100, one of the fastest bikes twenty years ago. But if you were to compare it to a litre machine today, it would come across as a fast lorry. Where a litre class machine would be lost without its quota of space age materials and rev-mad motors today, back then you needed at least a litre of transverse four developing around 100 horsepower, 250 kilos of metal and a wheelbase of about 5 feet to qualify for the fast lorry club. Also, horsepower wasn’t all that it is made out to be and bikes were tuned for usable powerbands. Displacement and not its consequence was the holy grail back then.

Since its introduction, the Suzuki GS1100 had been lording it over the class of ’80 and it represented the ultimate in high speed haulage. With the CBX morphed into a sport tourer for 1981, the CB900F took over as Honda’s 1000cc entry. Yamaha was busy making some awesome two strokes that were still pulling the pants off big capacity motorcycles, and couldn’t be bothered about the four strokers. And while Kawasaki had struck gold with the epic Z1 in ’72, all they had at the end of the decade was a Z1000H, basically an evolved Z1 that looked very like any other Thou. The H wasn’t exactly a giant leap forward, but it did pave the way for the GPz1100 series, which was kicked off in ’81 with the B1 model.

As a descendant of Kawasaki’s high-performance heritage, the GPz took the Z-1 concept further and the one you see here came out a year later, replete with a mini-fairing, inside which lurked a revised set of instruments that included some LCD gauges, the last word in space-age technology in those days!   The GPz series was a real visual treat back then and for an era that was known for hairy Kawasakis, the sharp edge styling and pencil diameter forks attracted eyeballs and clung onto them. And in a classic design touch, Kawasaki gave the engine and the exhaust a matt black finish. In fact, most of what is normally chromed on a motorcycle was finished in black, sort of like the Shogun.

In 1981, Kawasaki claimed that the GPz1100 was the quickest production motorcycle available and to help its claim, they used an existing 1089cc engine (from the shaft-driven KZ1000 tourer), gave it more punch and put it in a modern, light-weight chassis. The engine was not overtly high tech, being a 2 valve per cylinder design (the Suzie and the Honda had four), but fuel injection had finally reached motorcycling. Kawasaki injected the GPz series because they thought it would favor a linear throttle response. In practice however, it made little difference. Besides, Kawasaki only claimed a measly one bhp bonus and road test figures from that time didn’t prove the existence of even that nominal gain. What they did find was less welcome – increased fuel consumption.

That’s enough history for today. Time to get in the saddle. The GPz comes with a low bar that angles your body forward in a nice balance between the pull of gravity and the rush of air, while the rear-set pegs keep things from feeling cramped. The weight starts to talk the minute you get on the bike, and so do the 108 horses. As you would expect, the GPz never feels like a low-speed mount, but it gains momentum beautifully and even though it never threatens to throw you off, loads of torque over the wide powerband does its best to explain what 80’s motorcycling was all about. With fifth gear engaged and the deep bass note reverberating off the concrete divider, the big Kawasaki is in its elements. There is something about this bike and 100 kph. That’s where it feels in its groove, unperturbed, ready to pounce on whatever you throw at it.

The GPz goes about its business with a cool and calm air about it; there could be a storm in the backdrop and it would carry on without a care. It seems to say ‘I can do whatever you like, but all I want is 130 kph, all day long and for lunch I would like some sweeping corners, but please don’t trouble me with the extremely twisty bits’. And even if you do, it would shrug its shoulders and have the horizon bent far off kilter, with that mesmerising, unmistakeably Kawasaki note providing the background score. I am sure young engineers in green coats are given one hour audio sessions on how to make a Kawasaki sound, and they use the GPz for this.   Although we didn’t do any numbers, American magazines have reported a 11.44 sec/190 kph quarter mile, which is phenomenal even today, and even went on to say that if the world was a racetrack the GPz would indisputedly be one of the world’s greatest motorcycles. Of course, it isn’t and they aren’t; but the key word is ‘indisputed.’High praise indeed, because this was an era where the chassis engineers were still lazing around while the powertrain guys had worked their asses off, and this wasn’t the first time that an engine was ahead of it’s chassis. The GPz had some handling issues and as the UK’s Bike put it ‘the GPz asks you if you can cope with what it can do and the answer to that normally lay in the bottom of a ditch.’

This Kwacker was the last of the big aircooled superbikes that brought the express trucking era to a close. Even though the GPz wasn’t iconic, it did revive sales apart from having a similar effect on smaller machines.

Although this Kawasaki became head strong with 16 valves in 1983, it gave way to the 750 Turbo after which Kawasaki unveiled their liquid-cooled 900cc Ninja. That’s when the game really moved on. In that sense, the GPz was really holding fort for Kawasaki till it got the Ninja. But in the early eighties, it was a collection of ‘mosts’ and ‘bests,’ and a standard-bearer for its manufacturer’s commitment to two-wheeled performance.

Kawasaki did bring back a GPz series, but it wore its touring clothes this time around. Those Japs, I tell you; they’ll rebuild an entire motorcycle but they can’t come up with a new name for it.The GPz1100’s brutish looks and primeval growl could bring a dead man’s blood to a boil, but words alone can’t explain how good the GPz1100 Kawasaki really is, unless you count my heartbeat fifteen minutes after I have gotten off it.