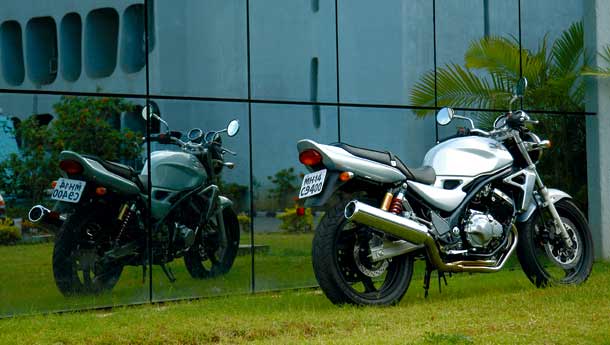 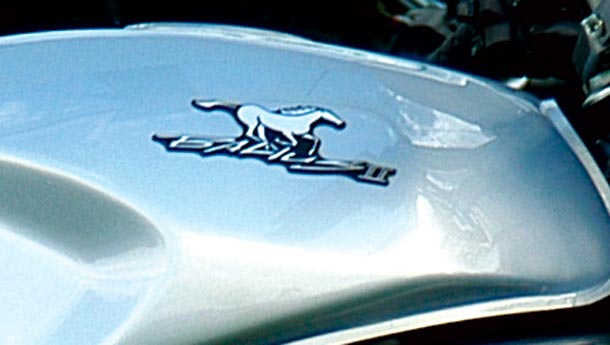 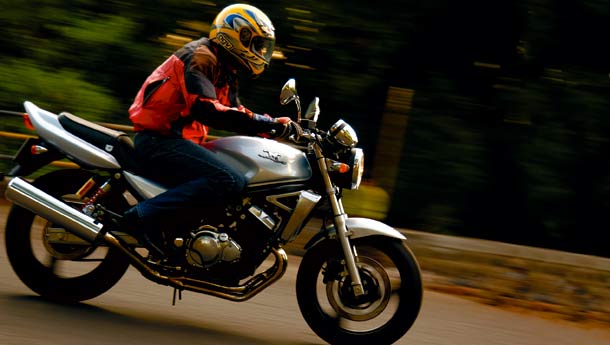 I haven’t owned a motorcycle since I sold off my RD350s and the CB750. And now, I am about ready to buy one. I was beginning to consider a Pulsar 180 DTSi when Kinetic handed me the Hyosung Comet for a spin. Which made two things very clear –16 bhp may not be enough for me and 30-odd bhp for just under two lakh rupees seems like a reasonable deal.

Consequently, I was beside myself with curiosity after the call to ride this, the Kawasaki Balius II. The moniker comes from the Iliad. Achilles, the man with the strong constitution and weak heel, rode a chariot which was pulled by two immortal horses, Balius and Xanthus. In fact, when Kawasaki launched this bike in 1993, named it the 250 Balius, and the 400, which came later, the Xanthus.

Back to the motorcycle, then. The Balius is a bit of an engineering marvel. A shining example, even, of Japanese micro-motor engineering. Get this: for starters, the engine is a liquid-cooled 250cc inline four cylinder. That’s four cylinders, each displacing a laughable 62.5cc. Yes, there are four 49 mm pistons that travel just 33 mm to make about 40 bhp. At 14,000 rpm. Perhaps even more impressive is the fact that Kawasaki have somehow managed to make each cylinder a four-valver and the full complement of 16-valves is operated by double overhead camshafts. And while you are practically shaking with disbelief, I might as well point out that the healthy 2.04 kgm torque peak comes around at a dizzying 13,000 rpm. So it isn’t your vision failing when you spot the tacho which is calibrated to 20,000 rpm and is redlined at 17 large.

The engine, once running at a soft, muted idle, makes a typical four-cylinder hum. Blip, and you get downscaled big bike sounds, sort of like the hum, with the bass notes removed. Oh, and each tiny blip sends the tacho needle well past 8,000 rpm and just a teeny-weeny bit more will turn the ‘whoun-whoun-whoun’ blips into shrill, hair-raising trips past 12,000 rpm. Holy cow, does the thing actually have a camshaft?   Roll off and you’ll agree it does. In fact, while the crankshaft seems too light, almost weightless, you will notice a little flywheel effect, which adds to its low-rev rideability. The Balius is un-intimidating to ride slowly and its tiny dimensions make it very easy to get to know her. You can smoothly roll along at 35 kph in top gear with no stumbling, protest or herky-jerky.

In fact, this is the time when you realise just how tiny the Balius really is. The tank looks smaller than my helmet and spreads my legs less than the Pulsar’s unit. You don’t have to reach for the handlebar at all and the rear set pegs tuck your feet high and back. In effect, the ergos lock you into the motorcycle and form a tiny, but as we found out, formidable, package.

Lolling along, there doesn’t seem to be much action below 10,000 rpm. That is until you glimpse other vehicles evaporate rapidly from your rock-steady rear view mirrors. Past ten grand though, the lion cub growls turn more serious, grow louder and angry notes creep into the exhaust. The thin shriek at the redline is a richer sound and as a bystander you cannot help but recall full-on race bikes when a Balius passes you at full chat.

Ten grand is also the first step up in power. The Balius seems to lunge forward, as if realising that the rider wants to hustle. But as you near the torque and power peaks, there is a kick in the pants which is really addictive. The Balius will then scream to the redline with an urgency that is a huge, big surprise. The sheer ferocity that in the last few thou revs is stunning. And surprising. You want to stop after every run to the redline, take off the lid and have a good belly laugh while patting the motor as thanks for the entertainment. I don’t think you could have more fun than this in a straight line on a small multi-cylinder motorcycle.

As I negotiate traffic, visions of a two-lakh rupee down-payment swim in and out of my helmet. Seriously, having emptied my bank, I’d be able to laugh all the way to work and back. And go scratching on the weekend. Which should also tell you just how flexible the motor really is. In Pune traffic (which, by the way, is an utter, unspeakable mess), the Balius doesn’t seem to be out of place. It is tiny enough to capitalise on gaps quickly, turns smartly when needed and rolls along with planted authority. Slick and uncomplaining. Perhaps the only clue that you are on serious machinery is the heat. Normally swept away in the slipstream, the heat from the radiator curls around the legs, so each traffic light gives the calf and thigh sweat glands a full workout.

But to really appreciate how fine a motorcycle the Balius is, you’ve got to get out of traffic. Then the Balius will show you some fancy footwork. Not quite in the manic ZX-10R league, the little thing does have it’s own whee armoury. The 110 and 140-section 17-inch tyres and low-slung stance give it great grip and its stability is aided further by conservative steering geometry. More than once, in fact, I was reminded of the Kawasaki ZX-7R  (see first ride in September 2003 issue) while cornering the Balius.

It is well nigh unshakeable. Whether crawling along or zinging past blurred scenery, the Balius is friendly, animated and articulate. Just set it up to follow the line you’d like, and it’ll do the rest smoothly. Quick flicks need a bit of work but once you get the hang of it, the rest is easy. The chassis setup leans towards stability and predictability rather than razor sharp turning ability, which, in this package works very, very well.
Perhaps the big surprise, motor apart, was the supple ride. The Hyosung Comet was sprung very firmly, lending it a sporty air, but causing a lot of body movement over bad patches. The Balius is sprung more softly.   The twin shock setup allows squid-mode riding even through bad patches and I even (oops) jumped a speed breaker amidst the festivities without a care. Remember the B-roads I said I wouldn’t take the Comet out on? Well, here is the machine I would.

The single rotor disc too is in the same mould. Compared to the Comet’s stopper, it bites down less hard, is friendlier to use and offers more than adequate stopping power. Even when you’ve managed to overcook it a bit, trying to hear the high-revving shriek before coming up on the next corner. Which, needless to day, happened very often. Okay, at every corner.

I absolutely loved the Kawasaki Balius II. And not just for its abilities. You see, deep down, while I’d love to coast about on an R1, I know it isn’t very realistic. 150 bhp in Indian traffic is daunting enough. Having to shell out a seven figure sum for one is well nigh prohibitive. Which is where the Balius comes in. I want you the read the next bit very carefully. The test bike I’ve been screaming about on, happens to belong to Bajaj Auto Limited. So all you sweet chaps at BAL, thank you so much for the ride. And keep ‘em coming. More importantly, BAL is, for now, clear that the Balius has no launch prospects. However, between me taking delivery of the bike and finally returning it, we had gone from not-for-launch to do-a-poll.

Sources indicate that BAL should be able to price a CBU imported Balius post-homologation at around the Rs 2,00,000 mark. Which is very reasonable for a potent, four-cylinder motorcycle. And for one that will be flexible in daily use, as well as maniacally high-revving by turns. Oh, and 40 bhp is ten more than the Comet.

So, if BAL were to tag the bike at that price, and offer service and spares at select towns – say, Mumbai, Pune, Chennai, Delhi and Bangalore (my list of prospective cities, not BAL’s), would you buy one? Serious enthusiasts willing to put the money where their mouth (or keyboard is) should (please!) send us an email at mail@bsmotoring.com. Enough responses might be able to persuade Bajaj to launch
the Balius in India and introduce India’s first off-the-shelf inline four.

The other good reason to buy the Balius is this. If you all say you want one, and are willing to put up the money, I’ll get to buy one as well.