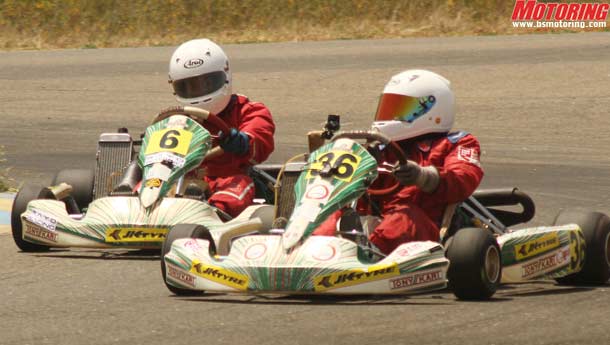 At first, I was intimidated. Boys lean, fit and with outrageous hairstyles seemed to know the sport like the back of their hands. The sheer number of moving parts, the clatter, the chaos, made me gulp. It was my first time at Foosball (Yes! What were you thinking?) and I was playing a friendly match with boys as young as eight and the seniors, who were no older than 14.

This was in the pit area at the final round of the JK Tyre Rotax Max National Karting Chamionship and the entertainment lounge (if I can call it that) was buzzing with young racers pointing at the soft drink vending machine or having a go at fooseball/slot-car racing or shedding yet another millisecond of their lap-time at Monza on the F1 simulator. I walked around, looking for someone 'serious' to talk to, but those looked really busy, talking into walkie-talkies and/or shouting at someone or the other.

So I seeked solace in an energy drink, pulled a chair adjacent to C1 of the karting track at Hyderabad airport and waited for the races to begin. While the speeds of the karts (even the smallest ones in the Micro Max category) were amazing, the people driving them were even more so. The same kids who you wouldn't think serious enough to even win at fooseball seemed like shrunked F1 drivers.

From how well they knew their racing lines to how they had completely mastered left-foot braking, it was overwhelming, especially for the motorsport newbie that I am. Once their white Arais were strapped, their eight year old selves were left behind in the pits. What followed was sheer professional racing - inch-perfect overtaking moves, slipstreaming, you name it! It was incredible to see such a high level of discipline in the drivers, none of whom showed any signs of aggression even when knocked out of the race by a competitor. If you think this comes out of being 8 and not understanding the nuances of rivalry and competition, then you must know that even the seniors behaved themselves in the same way.

The interesting bit, however, was the driving style of the Senior Max karters. They were all very professional, no doubt, but they showed flashes of aggression when faced with a bullish driver. Schumi-chops are a bit far fetched but subtle door-closing and overtaking from the outside? Yes, lots of it! Still, once off the track, the boys would help each other out with virtual F1, joking about x driver's outrageous move, generally having a good time.

Many years ago, a journalist from another magazine in a column had written about how no (then) present day driver was capable enough of having his mug spread across on a cola billboard. He questioned the credibility of the drivers as popular figures, pointing out how no one would buy a cola drink endorsed by an Indian driver simply because they didn't seem convincing enough as personalities.

That question loomed over the evolving lot of Indian racers, but the answer seems to be nearing us slowly and steadily. Not only do the new boys know their motorsports, they're also extremely media savvy. They know their words in the post-race conferences, they know how to maintain diplomacy when addressing other drivers', well, incidents. Most importantly, the new breed of Indian racers have their own styles not just restricted to the hair on their heads. Over are the days of the conservative, soft-spoken Indian racers. Now, wouldn't you like to see a little bit of Juan Pablo Montoya?