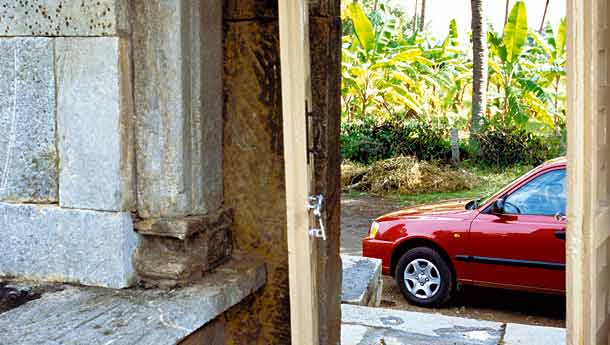 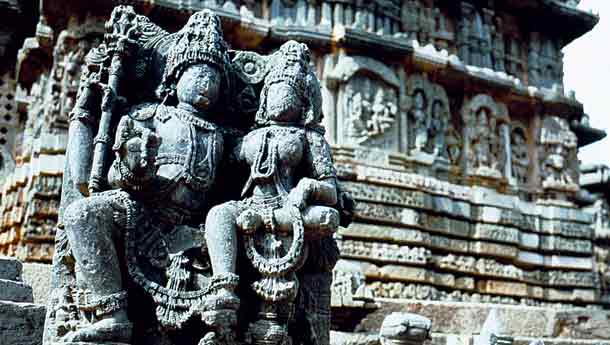 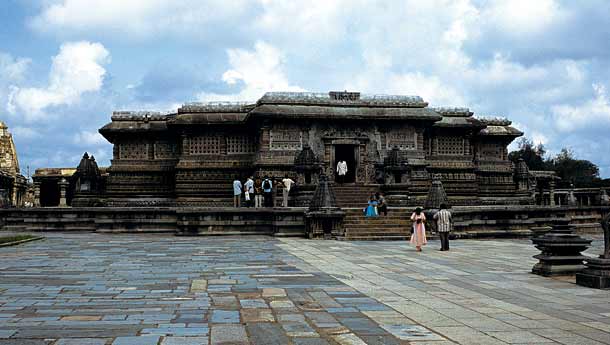 I ask you, what is it with the Jains? I’m sure they’re among the nicest people in the world, mind you. They’re non-violent, which is always good. They don’t eat onions and garlic, which is good too – there’s more of the stuff going around for the rest of us, plus there’s never the danger that a post-meal conversation with a Jain will make your head reel. They are, no doubt, a good mob to know and always up for a few laughs. But… when it comes to building temples and other places of religious interest, they’re a bit peculiar. I’m probably wrong, but I’m willing to wager that they fan out and look for the highest, most inaccessible place they can find and then plonk all their religious structures down on it. Of course, once they’re done building, the results are usually stupendous – readers may remember my earlier trip to Girnar Hill in Junagadh, where the temples are quite wonderful. The point, however, is that they really make you sweat it if you harbour a desire to have a look at their handiwork.

Case in question: Shravanabelagola (I dare you to say that ten times in succession without tripping up), one of Jainism’s most important pilgrimage centres. I had just driven down from Bangalore on an absolutely fantastic stretch of highway, NH48, and was in high spirits. The Viva CRDi I was driving was the ideal car to attack the road with relish and I reached the place in what seemed like the blink of an eye. Once I got to the site, however, I was struck by a nasty sense of déjà vu. The giant granite monolith of Gomateswara rose majestically into the sky… on top of a very steep hill that had, well, rather a lot of steps carved into it. I groaned, my mind casting itself back to Girnar Hill and its 10,000 steps and cringing at the memory of the near-three hour climb. Thankfully, the way up here was considerably shorter, so I hitched up my socks and plunged manfully upward.

Half an hour later, soaked in sweat, calf muscles screaming in agony and feeling not so manful, I finally made it to the top. It was a hot day and the stone steps had done the soles of my feet to a nice turn, which didn’t help matters much… and I discovered there was still a bit of a way to go. Yelping ‘Ow! Ow! Hot! Hot! Hot!’ and taking the last steps two at a time, I virtually pole-vaulted into the sanctum sanctorum and was suddenly faced with the sight of Gomateswara in all (and I do mean all) his glory. Sixty feet may not seem like much on paper, but I assure that it is quite something in the stone. It was carved out of a single block of granite in 981 AD and, as usual, those Jains had done a slap-up job of it – if you’re not impressed, you’re being bloody-minded.

I decided to ask a family (who had just wheezed their way up behind me) why anyone would subject themselves to such a strenuous climb just to see a statue. ‘I mean to say’, I told them, ‘if I had to climb barefoot almost vertically uphill just to go to church, for example, I’d quietly ask the Man Upstairs to forgive me and stay at home.’ The family laughed and said ‘That’s true, it may seem like a lot to do. But the problem with people these days is that they expect everything on a platter, even religious gratification. The whole point, you see, is to work for it, to make the effort – when you get something after working hard for it, you feel a hundred times happier.’ ‘Touché,’ I thought, and went off feeling a bit sheepish. No arguing with that logic, eh?   Chastened as I felt by the family’s calm response, I was relieved to drive into Halebid and find that there was nary an elevation in sight. The route from Hassan had been green, brilliant (and, most importantly, flat) and this healthy trend continued right up to where the Hoysaleswara temple was located. Halebid is one of those places that you almost discover by accident when you happen to take a bend in the road – it’s a charming, sleepy little village, which, at first sight, doesn’t appear to offer much other than lots of plump cows sitting in the middle of the road. You would do well to look again, though, because the Hoysaleswara temple is one of the finest examples of temple architecture you’re likely to see anywhere in the world.

‘Hale beedu’, or the ruined city, was once the capital of the Hoysala dynasty that ruled the Southern Deccan from about 1006 AD to around 1346 AD. Originally vassals of the Chalukya dynasty, they gained their own identity when one of their leaders, Bittiga, decided to chart his own course. Bittiga and his successors, like many rulers of the time, were religiously tolerant and encouraged the expression of faith through artistic means. Under him, temple architecture also moved away from the Chalukyan style of building and became especially ornate and intricate. Halebid remained the capital of the Hoysala empire for over 150 years, until it was twice attacked and ransacked by Muslim invaders who cleared out with all the city’s treasures. The Hoysalas knew a dead-loss when they saw one and abandoned the city, shifting their capital to nearby Belur (about which more later).

Set amongst perfectly manicured lawns and situated next to an artificial lake, the Hoysaleswara temple was unlike any other temple I had seen. To begin with, it was star-shaped and set on a raised stone platform, unlike some other Indian temples, where you have to crane your neck upwards at an awkward angle just to see them in their entirety. Of course, I don’t presume to suggest that these other temples are a pain in the neck; on the contrary, they are masterpieces in their own right. It’s just that the Hoysalas appear to have chosen subtlety and intricacy over sheer substance and boy, it makes for quite a sight.

The temple here is actually an amalgamation of two separate temples, joined on the north-south axis by pillared walls. You wouldn’t be able to tell, though; such is the brilliance of the work. Both temples took almost a century to build and are still incomplete, which is scarcely believable given the sheer artistry on display. From top to bottom, every inch of the temple is embellished with a dizzying and endless display of fantastic carvings. Stories from the Puranas, Upanishads, Ramayana and Mahabharata, gods, people, animals, music, hunting, dancing, agriculture and sex – all these and more were illustrated in the most exquisite detail. Each panel has a story to tell and though it was a pleasure to just walk around and stare in awe, I found that hiring a guide made sense because they know the stories like the back of their hand. I lost all track of time as I wandered around the temple, with no one else about but a few fellow-tourists. I realised that it was possible to spend whole days here and still come back for more, Unfortunately, I didn’t have the luxury of infinite time available to me, so I set out for Belur instead.

Belur and Halebid are usually mentioned in the same breath (as in ‘I say, you’ve seen Belurhalebid or what?’) and that’s probably because they’re both centres of Hoysala architecture and are only 16 km apart. There, however, is where the similarity ends. Halebid is a superbly preserved jewel, fit to be put in a giant showcase in a museum. I felt awed in its presence, almost as if it was too delicate to touch; in contrast, the Chennakeshava temple in Belur is more proletarian in character, primarily because it is still a living temple; unlike Halebid, daily pujas continue here. In addition, this temple has one very significant difference – a towering gopuram, in the Dravidian style of building, stands at the entrance. In a corner of a sleepy village and commissioned in 1117 AD by Bittiga, the temple took over a hundred years to complete and typifies the Hoysala style of building – multiple, small, raised structures covered with an abundance of carving work. I felt a sense of relaxed familiarity when I entered the main complex.   Here, devotees were putting money into the donation box. There, a wizened old lady sat in front one of the temples and sewed garlands, flashing a gummy smile at all that passed her. A goat sidled up and tried to make a snack out of my trouser leg, a course of action it was shortly to regret; a deft smack to the nose and it bolted, probably to try and disrobe some other unfortunate. As with Halebid, I slipped into a sort of reverie while walking around the complex – there was something strangely soothing about the place, though I couldn’t quite figure out what it was. Later, I noticed that several of the sculptures had discernible writing on them, almost as if the people who had crafted them had signed their work. On further enquiry, I was told that this was indeed the case; the master craftsmen of the Hoysala era engraved their names, titles and sometimes even their places of birth on their work, a break from the normal Indian tradition. I realised that it all fit in nicely – if you sat down and produced such incredible works of art, wouldn’t you want to put your stamp on it? I certainly would, and to hell with modesty.

Shravanabelagola, Belur and Halebid are only a few hours away from Bangalore and make for an ideal day trip, if time is of the essence. However, I suggest that you first make a brief stop at Shravanabelagola. Make sure you’re reasonably fit; it’s a tough climb! You could, of course, hire porters to carry you up but unless you’re elderly or sick, it looks terribly embarrassing. Carry on down the road after this and spend at least a couple of days taking in the temples at Belur and Halebid. They’re well worth it, take it from me. In Halebid, apart from the main temple, there’s also the Kedareswara temple (portions of which have sadly collapsed) and a group of Jain temples called the Basadi Halli (don’t miss the highly polished pillars in this group). In Belur, there really isn’t much else to see apart from the Chennakeshava temple, although if you’re into trinkets and other odds and ends, there are plenty of little shops. In both places, it’s fun to drive around the surrounding countryside just for the heck of it, especially in the rains. The drive from Bangalore to this part of the world is fantastic, especially the stretch from Neelamangala to Hassan. You’ll be tempted to floor it and keep it there, but exercise caution because there are quite a few unexpectedly sharp bends!