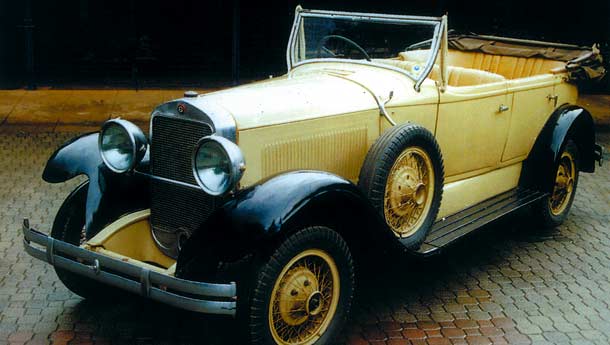 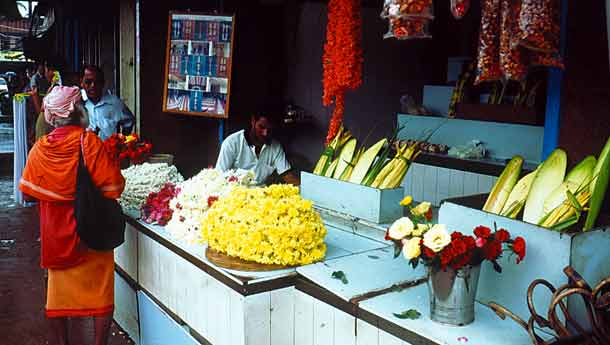 An 8-cylinder 1928 Studebaker, formerly used by Mahatma Gandhi. An 8-cylinder 1949 Daimler Double Six, power-windows and all, custom built for His Highness Sri Jayachamarajendra Wodeyar of Mysore. A single cylinder 1903 Renault, more horse-cart than car in appearance. A 6-cylinder 1924 Rolls Royce with a seat for the mum-in-law. A 4-cylinder  1937 Skoda coupe, just right for a sunny day’s drive in the countryside.

Here an Adler, there a Sunbeam, a Jaguar further ahead, a cheerful Veedub Beetle and more Dodges, Buicks, Packards, Cadillacs, Fords, Chevrolets and Pontiacs than you can shake a dipstick at. If all this sounds like the inside of a particularly well-stocked vintage car museum to you, you’d be right. Except that the museum in question isn’t in a former maharaja’s palace in Rajasthan, or in a moneyed-to-the-retinas Mumbai collector’s garage – it’s in Dharmasthala, a picturesque little temple town in the hills of Karnataka and quite the last place you’d expect to find a place like this.

The Manjusha Car Museum, as it’s called, is a treasure-trove in every sense of the word. It houses almost fifty cars and a resident team of dedicated mechanics ensures that every single one of them is in running shape, not an easy task by any stretch of the imagination. A flash of an old issue of  Motoring  and I was instantly flavour of the month with them, and a personal guided tour followed. Apart from getting the dope on cars I was looking at, my privileged status allowed me to step over the ropes keeping the public at bay and sit in them, something that pleased me no end – there’s immense satisfaction to be derived in a situation where you’re allowed to do what everyone else isn’t, I tell you.

Apart from being a bonanza for classic car enthusiasts, the average Joe can be enlightened by such pithy facts as:

‘Who was the first person in India to own a car?’
Mr Foster of M/S Crompton Greaves Company in 1897
‘Who was the first woman to drive a car in India?’
It was, perhaps Suzanne RD Tata of Bombay, some time around 1905 (note the neat covering of bases)
‘Who was the first woman to drive a truck in India?’
Smt. Parvathy Arya of Madhya Pradesh, Lorry MBU-4534
Having memorised Smt. Parvathy Arya’s truck registration number, I shook hands with the friendly mechanics, wiped generous deposits of grease off my palm and set off for an audience with the man who, apart from being the museum’s founder, was also the head of the town’s temple trust – Dharmadhikari Dr D Veerendra Heggade.   Here’s another pithy fact for you (well, three actually) – the Manjunatha temple, which is Shaivite, has a head priest who is a Vaishnavite and a Jain family (to which Dr Heggade belongs) has been at the helm of affairs for the last 500 years. How’s that for national integration, eh? According to legend, the guardian angels of Dharma, Kalarahu, Kalarkai, Kumarswamy and Kanyakumari, took on human form and paid a visit to the
house of Pergade-Heggade and his wife. The two apparently laid the hospitality on in abundance, because the angels asked them to vacate their house, build another one for themselves nearby and worship them (the angels, that is) in abode No 1. In return, the angels would ensure that the couples’ ‘wealth and charity would be unbounded.’ Blessing thus delivered, they vanished into thin air, giving the two an inkling that their guests weren’t exactly your average travellers. They promptly built themselves another house and began propitiating the angels with a vengeance.

Later, the couple dreamt of the angels, who directed them to build separate shrines for all of them and hold festivals at appointed times. ‘We shall reward you and your progeny with health, wealth and longevity so long as you worship us with faith and devotion. We shall back your wishes with support, your word with fulfilment and crown all your efforts with success,’ they said, slipping in the P.S. ‘Should you act against this behest, you shall suffer.’ Not surprisingly, four shrines were built in record time, to which was later added the structure in which the idol of Lord Manjunatha presently sits.

Sitting, by the way, was the issue uppermost in my mind while I waited for Dr Heggade in a hall in his beautiful old house, situated right next to the temple. I felt like a vassal of some Mughal emperor, given that the setting was exactly like a  darbar. A few other people waited along with me, no doubt with complaints about eloped daughters and errant relatives. You see,Dr Heggade is also a judge of sorts – he is legally entitled to arbitrate on issues such as these. Anyway, he soon wafted into the hall and everyone sprang to their feet. I leapt up as well, unsure as to whether to crack a smart salute or prostrate myself at his feet. In the event, I ended up doing an impromptu breakdance of sorts, something which obviously caught Dr Heggade’s attention because I was the first person he invited forward. A bespectacled, soft-spoken gentleman, he seemed particularly pleased that I had driven all the way from Bangalore just to look at his museum, and we had a long chat about cars, photography and the charitable activities which the temple trust was involved in.

Having taken Dr Heggade’s leave, I turned my attention to an issue of earthshaking importance – food. I’ve said this before, but it’s worth repeating; one of the reasons I love driving around the country is all the different food I get to eat. Thus far, I’ve treated myself mainly to lots of meat and seafood, so in the interests of democracy I had decided that on this trip, I was going to sample some world-class vegetarian food. With this noble intention in mind, I set off for Udupi, about whose cuisine nothing further needs to be said – except, perhaps, that a lot of what passes for ‘Udupi’ food in Mumbai is absolutely wretched. Idlis hard enough to be used as deadly weapons and sambar so sweet it gives you instant diabetes – these are hardly standards by which true Udupi cuisine is to be measured. Go to the source of it all, that’s what I say.
By the time I got to Udupi, I began to feel like I had reached the source of all the rain on earth too. I was willing to bet that Cherrapunji would have let out a yelp and bolted with its tail between its legs had it seen the goings-on here. I checked into a hotel just off the highway and thought I’d wait it out a bit, but it just wouldn’t stop raining. I switched on the telly and was confronted with a yodelling Punjabi man dressed in a red velvet suit, singing some kind of ditty.  Rain or no rain, anything had to better than being cooped up in a hotel room with this lunatic, so I armed myself with all the waterproofing I could find and headed for Udupi town.   Udupi was a lovely little place, full of rambling old houses with mossy walls and emerald-green paddy fields. The rain, annoying as it might have been, actually made the place even more beautiful and my mood lightened considerably. I made my way to Car Street, right in the middle of town and the most visited place in Udupi – for two reasons. Firstly, this is where the town’s famous temples and  maths  are located. The Ananteshwar temple is where a childless couple prayed for a son, soon to be born to them as Madhavacharya, the philosopher-saint who founded the Dvaita philosophy. The 800 year old Krishna Temple houses an idol of Krishna as a child, and it was apparently commissioned in Dwarka by Rukmini. En route to Udupi on a merchant vessel, it was lost when the ship went down but Madhavacharya had his GPRS fully sorted and was able to locate it. He then chose eight priests to administer the temple, each holding the reins for two years. The Ashthamatha, or eight  maths, that surround the temples on Car Street represent these eight priests. The Krishna Temple also has a Kanakadasa window, behind which lies an interesting story. Kanaka, a low-caste devotee of Krishna, couldn’t enter the temple for a glimpse of the idol, so Krishna decided to turn westward to allow him a view through the window. This, you will agree, was very white of him and it reinforced his position as my favourite deity.

The second, and at least as far as I’m concerned, the most important reason that Car Street attracts so many visitors is that it is home to Mitra Samaj, one of the few surviving bastions of authentic Udupi cuisine. It was an unassuming place from the outside, and gave me few clues about the sort of gastronomic overload I was shortly to experience. A grinning waiter ushered me to a small table and let loose a verbal volley of menu items, from which I managed to discern ‘masala dosa’ and ‘pineapple halwa’. I played it safe, asked for a masala dosa, a plate of  idlis and a plate of  vadas  and sat back and waited. They appeared double quick and disappeared down my gullet even faster. I solemnly swear, with hand on heart, that I have never had such a perfect, crisp dosa, such fluffy idlis, such crunchy vadas and so pungent a chutney.  Dessert, in the form of pineapple and almond halwa, both malevolently oozing ghee, was even better.

After a glorious meal, I sighed, rubbed my tummy, let out a relatively polite belch and went back to my hotel room, where I flopped on the bed and prepared to sleep the sleep of the immensely satisfied. The rain, so annoying previously,now kept up a soothing rhythm on the roof. This, indeed, was the life.

The drive to Dharmasthala has to be among the best I’ve ever done. The route to Hassan from Bangalore is superb enough, but the back road to Dharmasthala via Belur is just brilliant. Smoothly surfaced, surrounded by greenery, hardly any traffic and with lots of twisty bits, this is one road that I’d love to drive on again and again – in a barking mad hot hatch, if possible. In Dharmasthala, the Manjunatha temple is, of course, the centre of attraction. It’s a very nice temple, and they serve every single person who comes there a delicious, piping hot lunch. The Manjusha Car Museum is superb too, as you’ve already read. Entry, at Rs 3, is an absolute steal. Also have a dekko at the plane parked right opposite the museum’s gates. The Manjusha Art Museum looks so-so from the outside but don’t let that fool you – there’s a great collection inside, including a whale-skeleton. A little outside town, there’s a nice bathing ghat where you can sit under the trees and while away some time. Look out for a sign saying ‘Don’t do nature call,’ which filled my head with visions of hundreds of devout pilgrims standing by the river and making bird and animal noises. In Udupi, apart from the temples and the food, there’s really not much to do. It’s nice to just wander around the little lanes and alleys that the town is full of, and if you’re in the mood for the seaside, Kaup and Malpe beaches are nearby. Kaup beach has a very nice lighthouse, and from Malpe you can take a boat to St. Mary’s Island, about
7 km off the coastline.