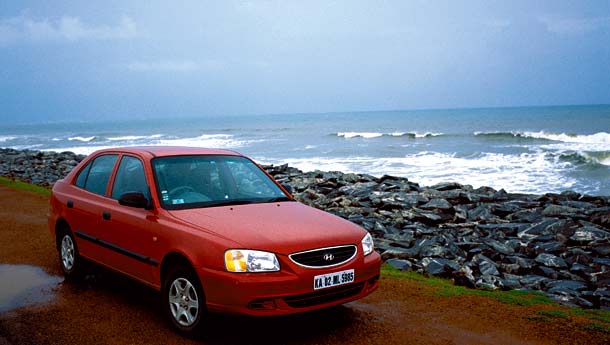 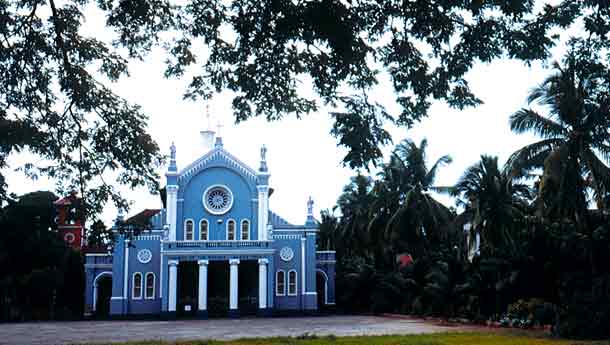 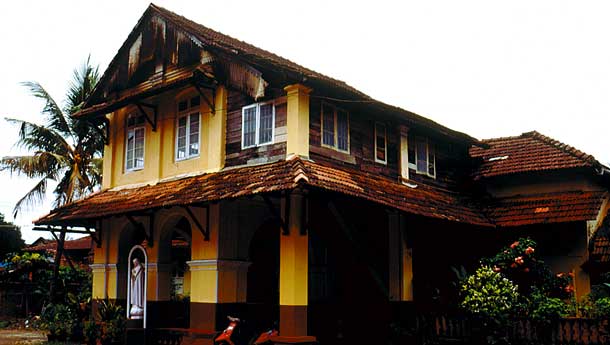 ‘Mangalore? Hah! Hardly anyone comes here anymore. It’s not what you would call a tourist spot and most people bypass it on the way up the coast.’ Now, if you’ve just driven all the way down from Bangalore, those are not the sort of words you want to hear. Sitting in Manohar Nayak’s cosy office in a lane off the chaotic Felix Pai Bazaar, I began to wonder whether my decision to have a dekko at  Mangalore had been such a bright one. Mr Nayak (who’s designed a website on the city) and his good friend Pandurang Nayak (who’s lived there all his life) were certainly in a good position to pass judgement on the place, which didn’t do much to lift my spirits.


‘You see, what happened was this – before, a lot of tourists from Goa would come down here on the way to Cochin and spend a day or two. Now, however, there’s a direct connection from Goa to Cochin, so it doesn’t make sense for anyone to come here.’

‘What about its importance as a trade centre?,’ I asked. Mangalore (from ‘Mangala uuru,’ or ‘auspicious place’ and variously called ‘Mangalapura,’ ‘Kudla’ and ‘Kodial’) has a history dating back to... well, a heck of a long time ago. Ancient Roman and Greek historians like Pliny and Ptolemy made mention of the river ‘Nithrias’ and ‘Nitre,’ both probable references to the Netravati river that flows nearby. Another Roman writer, Arien, wrote about a city called ‘Mandegora’ and Ibn Batuta, the original Lonely Planet writer, wrote about his travels to a place called ‘Manjarun’ or ‘Mandjaur,’ a prosperous town where Persian and Yemeni merchants did roaring business. A succession of rulers from the Vijaynagar dynasty held sway over the town until the Portuguese showed up in 1505, at which point the Vijaynagar kings, in a touching display of trust, allowed them to build a port. Before they could say ‘Hang on a sec...,’ the Portuguese took complete control of the town and that, pretty much, was that – they ruled for the next two centuries and the port became even more important.

‘Again, we’re talking about past glories. Yes, Mangalore was once a very important economic centre, even as recently as eight or nine years ago. The areca and beedi  industries were big here, but they’ve all shifted to neighbouring states. The old port was shut, too, and the new one is a bit of a distance out of town. One of the old-time industries that is still in a good state of health, though, is tile-making. Would you like to see a factory?,’ he asked, a touch of pride in his voice? ‘Sure,’ I said, trying to sound as enthusiastic as I could. I mean to say, I’m usually quite game for anything, but the prospect of taking a tour of a tile factory didn’t exactly make my hair stand on end.   I’ll tell you this, though – after I was done going around the factory, I took my instincts outside and gave them a sound walloping. The Albuquerque tile factory, folks, was one of the most fascinating places I’ve been to in a long time. It was established in pre-independence India by Alex Pai Albuquerque, who found that the clay in this part of the world was tailor-made for tile-making, and walking into it was like stepping back into the Industrial Revolution. Everything about it looked, felt and smelt old – the building, the machinery, the massive furnaces, even the garden that fronted the factory. Inside, it was dark and noisy and the heat from the furnaces made me break into a sheen of sweat. I walked from one end of the factory to the other (at one point I was told I was standing directly over the furnaces, which caused me to do a decent Nureyev imitation), watching in awe as huge lumps of red clay were pounded, oiled, smoked, cut, dried, transported on a never-ending series of primitive conveyor belts and baked until, as if by magic, there were stacks of traditional Mangalore tiles in front of me. A muscular man in a  lungi carefully tapped each tile with a little metal rod, listening to the ‘ting’ it produced to discern whether it had any cracks in it. Boy, he would have been snapped up like a shot by any recording studio in Mumbai.

‘One thing you will notice about Mangalore is that it has a decidedly cosmopolitan atmosphere,’ Pandurang Nayak had told me. ‘How so?’, I asked. ‘It’s hardly a big town like, say, Bangalore or Hyderabad.’
‘No, I’m not talking about size or things like the number of shopping malls we have. Just walk into any market and keep your ears tuned – the number of languages you will hear is amazing.’And he was absolutely right. In the space of a few hundred feet in a busy marketplace, I heard people speak Kannada, Malayalam, Hindi, Tulu, Konkani and even Bengali ( I kid you not). Just by looking at everyone around me, I could tell that Mangalore was a town which had, for many years, welcomed people of different faiths and diverse backgrounds. However, although it had been ruled by many different dynasties (the Vijaynagar kings, the Portuguese, the Muslims in the form of Hyder Ali and Tipu Sultan and the British) in the past, the most palpable influence that remains is undoubtedly that of the Jesuit priests of the 17th century. Walk through any of the narrow, sleepy residential lanes of Mangalore and you’ll find beautiful Portuguese-style houses with nameplates that read Rodrigues, Pais, D’costa, Albuquerque, Gomes and so on. I would kill, nay, gleefully slaughter entire districts to live in some of those fabulous bungalows but I would have to do it real quick – a lot of them have already gone, demolished to make way for dime-a-dozen high rise apartments. Progress and all that... sigh.

I decided to go and have a look at a couple of the most obvious remnants of Mangalore’s Christian heritage – the Rosario Cathedral ( Mangalore’s oldest) and the St Aloysius College chapel. The cathedral, built in 1568 by the Portuguese, still had the royal insignia of the king of Portugal at its entrance and was a study in simple elegance. The pulpit, however, was quite superb, with ornate images of the Evangelists, Jesus and Mary. The St Aloysius chapel, although fairly austere from the outside, was staggering once I entered it – every bit of its walls and roof were covered in glorious frescoes depicting the lives of various saints. An Italian artist called Antonio Moscheni painted the entire chapel in 1900, and even though most Mangaloreans will have you believe it rivals the Sistine Chapel, it is still a magnificent piece of artistry and is not to be missed at any cost.

Much as I liked its churches, I couldn’t leave Mangalore without a visit to its most famous temples, one of which gives the town its name. The ancient Mangaladevi temple, in the southern part of town, houses a shrine to Goddess Mangaladevi and was built in the tenth century in memory of a Rajmata of Malabar of the same name. She was a follower of the yogi Matsyendranath, a guru of the Nath tradition, and gave up her worldly life to settle at the spot where the temple stands. At first a small building, a temple was later constructed to commemorate her and the sculpture of the goddess here is perhaps the earliest Durga sculpture in the South Kanara District. Even though the temple isn’t quite what you would call an architectural marvel, it’s a peaceful old spot and well worth going to – especially if you’re a young girl who’s hoping to enslave an unsuspecting... erm, sorry, that should read ‘hoping to get married soon.’ The Swayamwara Parvathi puja held here attracts many young hopefuls, all hoping to placate the goddess in order to land themselves the ideal mate.   Mangalore’s other prominent temple, the Kadri Manjunatha temple, lies up in the Kadri hills within the town. Dating back to 1068 AD, this temple is dedicated to Lord Manjunatha and is quite interesting in that there are statues of the Buddha on it as well. Inside, there’s a great bronze statue called the Padmasanastha Lokeshwara that is supposedly amongst the oldest bronzes in the entire country. My favourite part of the temple complex, however, were the caves on top of the hill. Apparently, when the Pandavas were having their little tiff with the Kauravas, they nipped into these caves for a few days in order to avoid detection by their friendly cousins. I closed my eyes and could almost see them huddling about, accusing each other of stealing one another’s berries and roots. The Kadri temple’s other claim to fame is a perennial source of fresh water springing from a cavern, which is supposed to be the holy Ganga itself. I don’t know about you, but if I were the Gaumukh glacier I would have a thing or two to say about that.

As I left the temple, a torrential downpour began and put paid to my plans of wandering around for a bit longer, so I did the sensible thing and went and ate an outrageously large ice-cream sundae, curiously called a ‘gadbad.’ As I struggled to shovel it down my throat, I thought back to what Manohar Nayak had told me: ‘Mangalore? Hardly anyone comes here anymore.’ ‘Well,’ I told myself, ‘that’s just fine by me.’ Mangalore was one of the nicest little towns I had been to, and if less tourists meant I had the
place more to myself, I certainly wasn’t complaining.

Mangalore isn’t your typical tourist spot, which is really rather good because you won’t have to deal with a zillion other yelling, shoving, sweating human beings. At the same time, funnily enough, it’s almost the ideal tourist spot. It’s got the location (beautifully sandwiched between the Arabian Sea and the Western Ghats), it’s got the heritage (refer main story), it’s got the monuments (ditto), it’s got beaches and, absolutely above all else, it’s got the food-glorious-food. One taste of the local delicacies and you’ll be tempted to drive down here every week just to stuff your face. Bangda curry, kori roti and flaming hot chicken curry, prawns in coconut and tamarind, lady-fish or kane fry, steaming sannas  (the local idli) and pork sorpotel... I ate myself cross-eyed during my stay. Not once did my stomach protest either, so that says a lot for the quality of the ingredients. When I wasn’t busy consuming the gross national product of Burkina Faso, I found time to go to Someshwar beach in Ullal, a little out of town, and sit on the rocks. I also toddled over to Sultan’s Battery (pronounced ‘Sulthanbathery’ around here), a nice spot by the Gurpura river where there’s a remnant of one of Tipu’s watch towers. Tannirbhavi beach, next to the new port about 13 km out of town, was worth a look-see as was the Kateel Durga temple, about 30 km away. And then I went back and ate some more.