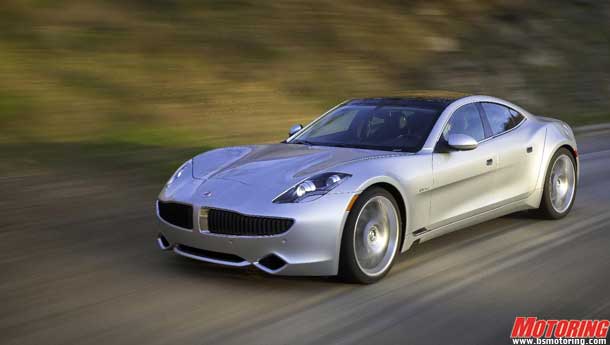 Technology lovers stopped and stared as the world's first high-performance hybrid luxury sedan glided silently down a street outside the Consumer Electronics Show in Las Vegas.

The eye-catching Karma designed in California and built at a Finland plant that also produces Porsches oozed high-end style while packing environmentally-sensitive engineering under the hood.

"It is a big, four-door luxury sedan that competes with cars like the Mercedes and Audi," Fisker Automotive's Russell Datz said yesterday from the passenger seat while an AFP reporter hit the accelerator to zip around a limousine.

"We are giving people in that marketplace the chance to drive an environmentally-friendly vehicle without compromising their lifestyles."

He referred to Karma as a Maserati for the upscale green set. Karma sedans are priced at about $100,000 in the United States and will be comparably priced when they debut soon in Europe.

"They saw a future of driving that needed to be more responsible about energy use and emissions but couldn't compromise on the excitement that comes with driving," Datz said.

"The electric cars that were coming to market weren't getting their blood going."

Karma is billed as the world's first luxury electric vehicle with range extended by a gasoline engine that, when switched on, powers a generator to supply electricity.

Drivers need only tap a paddle-shaped switch on the steering column to switch to a "stealth" mode in which Karma runs exclusively off battery power.

Sport mode shifts the Karma to electricity generated by the gasoline engine. The sedans have racing suspensions and boast top speeds of 153 kilometres per hour in Stealth mode and 200 kph in Sport mode.

"You get the efficiency and zero emissions of an electric motor combined with the freedom and range of a gas-powered car," Datz said

"You don't have to worry about where and when to charge... You can drive around all day as usual, then plug it in at night just like your mobile phone."

The Karma battery alone can power about 300 miles of driving, with a full tank of gasoline extending the range by 200 miles or more. Most car owners typically drive fewer than 50 miles in their daily routines, Datz said.

Karma green features include solar electric panels in the roof to generate power for the passenger compartment cooling system and interior trim made of "fallen, sunken or rescued wood."

Approximately 50 people have taken delivery of Karma sedans in the few months they have been available and another 1,200 cars are on assembly lines or on their way to dealers. About 1,500 buyers have put down deposits for Karmas.