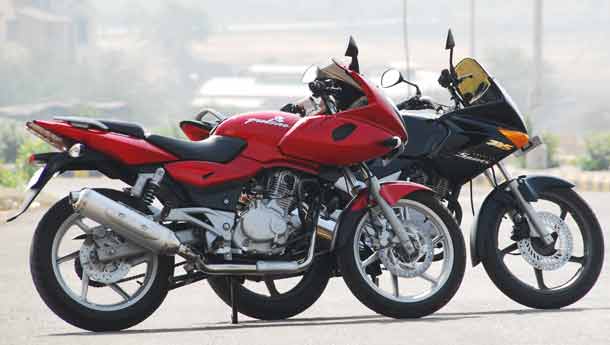 It was the second question he asked me. ‘So, will this thing ‘pull’ a Karizma?’ Well, Josh and I dragged the two out repeatedly to get the answer. And the answer is I launch bikes better than Josh. Let me tell you how I found that out. At the word go, the 220 shot forward, while the Kari (with Josh on board) was floating at about my ear. No, let’s focus. The 220 is marginally slower than the Karizma to 60 kph. It’s less than a tenth, but in a drag, the Kari chap will not see the 220 rider, while the 220 rider will notice the Kari fairing in peripheral vision. Then the game changes. Fractions later, the 220 begins to pull away with authority and the Karizma, no matter how hard it tries, loses as much as a bike length within the next 150-odd metres. There just didn’t seem to be any point in going any further in the drag race. Heh heh. And Josh, get this, weighs 6 kg less than me.

style
Build, fit and finish levels are about par, but the Karizma would lose points because it is known to rattle bits off (like the bulbs in the tail lamps). We won’t say that either bike is gobsmackingly good looking. Both have their points, but we say, about even.

greasy bits
The Karizma does have the smoother, less-stressed engine, but the Pulsar-Kari gap has closed. You already know that the 220 is way quicker and faster than the Kari. Advantage 220. Even on the gearbox front, the two are very close and sport excellent gearboxes.

corners
P220, definitely. On a fast flowing road, the Karizma would have quite a task keeping up. And not just because the P220’s actually faster. If the surfaces were variable, the P220s advantage would grow.
Perhaps the only place where the Kari would have a shot at a win would be in the dirt, where its genes (Honda CRF230F) would show up.

potholes
Its very close and we’ll call it even. The Karizma has a nice big-car sort of feel. It absorbs almost everything and lets you know nothing. Which feels good, but isn’t perfect. The 220 approaches the same sort of absorbent quality, but stops short enough to return feedback. Which is nearly perfect. .

numbers
Nothing left to be said. I only wish the P220 felt faster, as opposed to being faster than it feels. That aside, there is nothing to complain about. The Karizma stands no chance here. Especially given that the P220 rarely drops below 38 kpl, even when thrashed. Karizma? Oooh, we’ve heard of figures as low as 28 kpl and recorded as low as 32.

stop
The Karizma has always had a slightly spongy set of brakes. That hasn’t changed. Back to back, the P220 has more bite, more feel, more power in the anchors and makes every twitch of the fingers count. P220. Josh, however, insists that the Karizma (which, mind, has 10 mm larger rotors) returns more feel.

features
Digital dash and battery powered head lamps were the Kari’s two claims to features fame. Done and dusted. The P220’ list is so long, it’s pointless to even argue this.

price
They’re about even! Which means the loaded and faster P220 sails to a win.