Kapil Sharma is Back With Yet Another Commercial of Honda Mobilio

This is the 4th ad installment of Honda Mobilio with Kapil Sharma, rest three were at the time of launch

Kapil Sharma has once again stepped-in to promote the Honda Mobilio, fourth installment of Kapil Sharma’s spree with Honda India’s debutant MPV Mobilio was released recently. The stand-up comedian has been associated with Japanese automaker’s MPV ever since. The commercials starring him started rolling in nearly a month before the launch of the Mobilio. In the videos, Kapil is always found flaunting the features and practicality of Mobilio in a way he is best at! And this 4th commercial is no exception, in this he is entertaining a large family. Without further do, watch it!

Watch the fourth commercial - Kapil Sharma is back!

In case you missed the rest, watch the reaming Honda Mobilio commercials with Kapil Sharma

Speaking of the Mobilio, the MPV was launched after much anticipation in the month of July, 2014. Initially the sales bumped to 5000+ units monthly and it garnered good bookings also but after a couple of months, Mobilio settled around in the vicinity of 3000 units monthly. Expected to beat the Ertiga, but Ertiga maintained its monthly figures even after its launch. Innova was also hardly affected, instead Mobilio carved its own space in the aggressive Indian MPV segment. The sportier offering Mobilio RS also helped in the sales of the MPV. Moreover, with Renault India lined-up for the launch of its debutant MPV - Lodgy soon, Honda seems to be gearing-up to promote Mobilio! 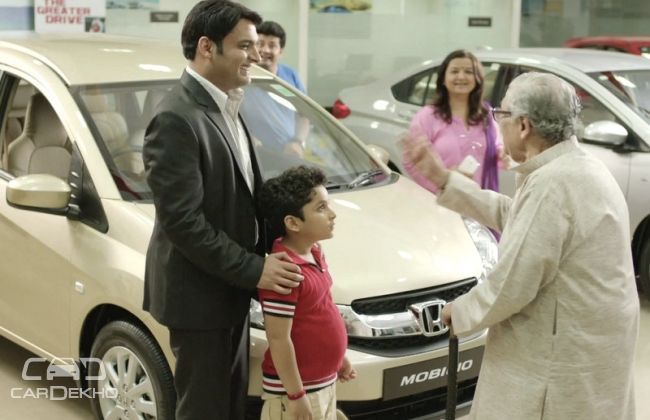