Four years since it was launched, TVS Motor’s Jupiter has become the second most sold two-wheeler brand in the country, edging past Hero but still way behind Honda in the ranking tables. It has notched up four million units in sales thus becoming, as the company claims, the fastest two-wheeler brand to hit the mark.

Positioned as a scooter that is convenient and hassle free and targeted at male riders, the company says that it has benefited hugely from improving infrastructure and growing popularity of scooters in rural India. According to market share data by SIAM (Society for Indian Automobile Manufacturers), TVS’s share of the scooter market has gone up from 13 per cent in August 2016 to close to 16 per cent in August 2017 while Hero has dropped from around 15 per cent to a little over 12 per cent over the same period. The number one brand Honda, however, is significantly ahead with over 59 per cent share of the market. 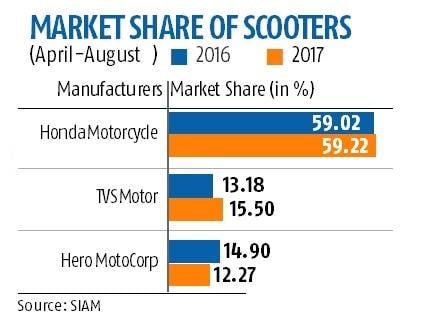 Aniruddha Haldar, VP Marketing (Scooters), TVS Motor, said that in the last five years the scooter market reported a 20 per cent CAGR (compound annual growth rate). The fundamental drivers of growth are still very active, so category share should continue to grow to reach 40 per cent of the total two-wheeler industry in coming few years.” The scooter has been instrumental in taking them to a new pole position and adding 20 lakh customers to the TVS family, he added.

At present, according to several reports,  one in every three two-wheeler on Indian roads is a scooter. The reasons are easy manoeuvrability, riding comfort and gearless convenience in congested traffic conditions say experts. For TVS, these facilitating conditions laid down the foundations for creating its flagship Jupiter brand.


The brand was crafted around the promise of ‘zyada ka fayda’(the benefit of more) and in 2015, Amitabh Bachchan was signed on as ‘brand philosophy evangelist’. The campaign and the association, the company says, helped Jupiter cross the two million mark. It  was also the fastest to cross the one-million-mark, doing so in 30 months, the company said.


Traditionally, the Chennai-headquartered company, was known mainly for its mopeds, but in the last few years scooters and, to some extent, bikes are driving sales the company said. Among two-wheelers, the 100-125cc segment will be dominated by scooters and gain heavily because of urbanisation and improvement in the road infrastructure, analysts said.


Five years back, of total two-wheeler sales, the scooter category accounted for 17 per cent. Today it is 35 per cent and is expected to increase to 40 per cent, say industry analysts. They add that automatic scooters may soon take over from the 100-110 cc commuter motorcycles, the biggest selling two-wheeler segment today. Between 2011-12 and 2016-17, scooter sales rose to 5.6 million units from 2.5 million units. The 100-110 cc bike sales, on the other hand, remained stagnant to negative, going from 6.6 million to 6.4 million units in the same period, according to several reports.


Initially TVS found success in the scooter market with Scooty and Wego, which were positioned for young women and newly married couples in urban India respectively. In 2013, the company launched Jupiter, to take on Honda’s Activa, positioning the brand as a ride meant for the head of the family. This helped differentiate the brand from the increasing swirl of scooter brands on Indian roads, all targeting the emerging and growing market of women riders. Mahindra, Vespa, Hero and Yamaha are all active in the scooter category but most of their products are targeted at women. TVS Jupiter positioned itself very sharply as a contender to Activa, focused on male riders.


The brand is popular not only among urban males, but also in the rural market that accounts for 15-20 per cent of overall scooter sales. Haldar believes that Bachchan has helped the brand find mass acceptance. He says that despite popular belief that scooters benefit from a unisex positioning, it is not the only way a brand can enhance its appeal among consumers. Comfort and mileage are big influencers and Jupiter addressed both concerns.


The choice of Bachchan was odd given that he did not fit the user profile, but Haldar says it was deliberate. Bachchan reflects the value that the tagline conveys, of enjoying the benefit of getting more than what one expects out of life. The company said that it had seen sales grow more than 30 percent in scooters and is targeting an overall market share of around 18 per cent over the next two years in the two wheeler market. And TVS Motor is relying on Jupiter to get it to its destination on time.