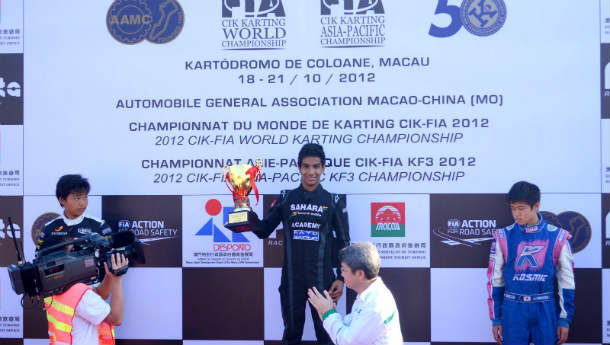 Karting driver and member of the Sahara Force India Academy, Jehan Daruvala, put on quite a show for the audience at the CIK FIA world championship last weekend. He was consistently quick in the heats and the pre-final race, and managed to qualify in pole posision. During the final race though, but dropped down into third in the first lap, after which he fought hard to get back into second place. Jehan had Japanese driver Marino Sat sitting comfortably in front of him in first place and a good 20 laps to go.

He slowly wihittled away at Marino's lead until finally, in lap 17, he could make a move, starting a series of position swaps by the two drivers. Finally, in the last lap, Jehan managed to overtake Marino and close the door on him to cross the chequered flag in first place. This is the best performance by an Indian in international karting till date.

Apart from Jehan, there were two Indian drivers at the event, Ameya Bafna and Raj Ganatra. Ameya started the Macau Cup Rotax final in pole position, but four laps in, his tyres started degrading badly, leading him to lose positions, but by the end of the race, he held on to fourth place, which in a grid of 28, isn't a bad result at all.

All in all, it seems like it was a good day for the Indians.