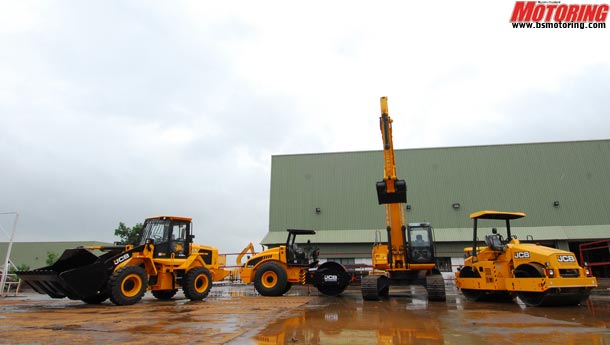 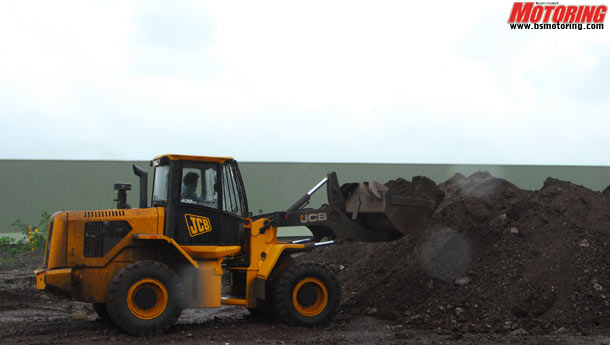 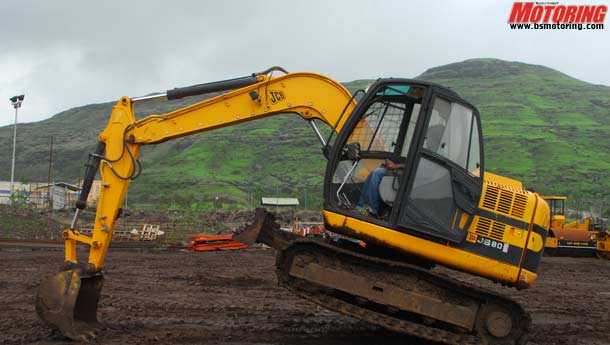 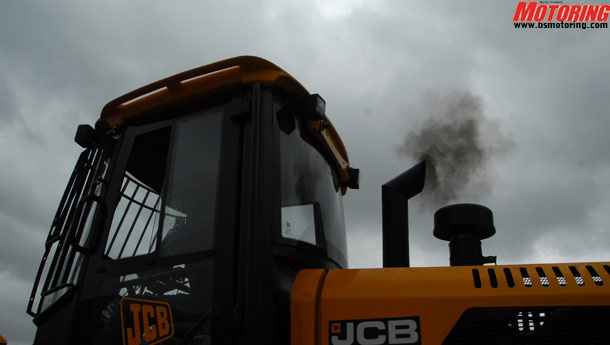 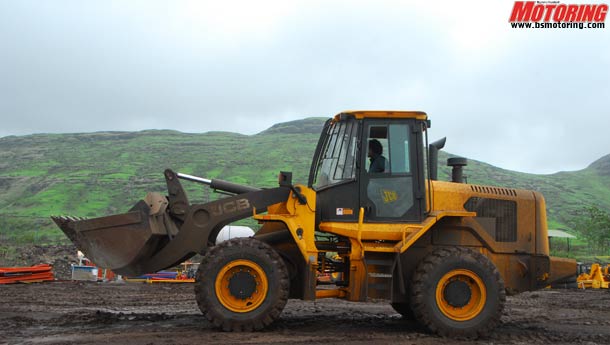 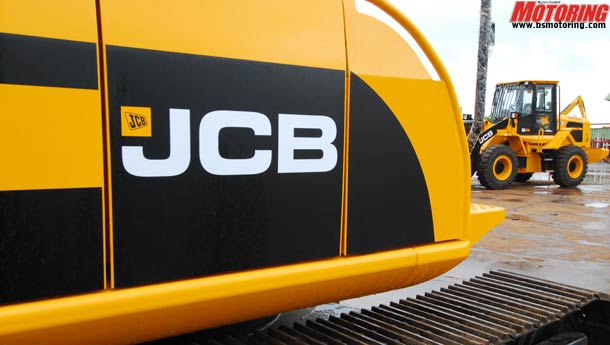 Work in Progress’ signs are everywhere. ‘Progress’, I might add, is a strictly relative term in our country. Like every well-meaning citizen, I spare no opportunity to make rude jokes about the varying states of ‘progress’ that periodically assault our cities. However, wherever you see the wildly optimistic sign mentioned above, chances are you will also see a big yellow machine with a big white ‘JCB’ painted on, working hard to make our engineers’ dreams come true.


I admit I’ve wanted to get behind the wheels and joysticks of these yellow-hued monsters every time I’ve seen them, like any other normal machine-loving person. The fact that ‘JCB’ has become synonymous with construction machinery only heightened that desire. Lack of opportunity, however, meant that my JCB plans were always on backburner – until now. When I finally scrambled into the seat of one, I was at a loss for words. No, really. What does one say about machines that can take on Mother Nature in all her glory and emerge as winners? Nonetheless, here I go.

The friendly folks at JCB’s plant at Chakan near Pune arranged for two types of machines for us to drive – tracked excavators and wheel loaders – and threw open their test track for us. I stood there, sizing them up and appreciating the fine mess that I’d gotten myself into. None of these machines have faces that can launch a thousand ships... unless said ships are fleeing from them, that is. Just as I was contemplating handing over the story to Kyle,

a ‘tiny’ 8010-kg JS81 slithered onto the track – in a JCB’s world, 8 tonnes is tiny and in front of the overwhelmingly massive JS210LC, it made for a much less forbidding proposition. Besides, I’d never driven a machine with tracks before and I just couldn’t wait anymore!

Functionality characterises each of these monsters. One look at any one of them and you immediately know what it’s born to do. Each one has that one part that defines it. They don’t look like vehicles either, even the ones with wheels. They seem more like living, breathing creatures complete with heaving limbs and incredibly strong hearts. The way they lurch around the surrounding terrain has visions of Jurassic Park flashing repeatedly in your mind. However, far from facing extinction, these mechanical creatures make JCB the largest construction equipment manufacturer in India, and you could possibly show up in the middle of nowhere with one of each type and build a civilisation out of nothingness.

Nonetheless, as I approached the smallest tracked excavator, my thoughts were equally divided into two categories – a) the massive teeth on that bucket impaling me  b) the high probability of me single-handedly bringing down the JCB plant with my inability to control the machine. I needn’t have worried.

Climbing into the JS81’s spartan cabin did reinforce the fact that I was indeed in uncharted territory – there’s no conventional controls to rein in this metal monster. There are two long levers in front of the seat and a joystick on either side – I swear I can figure out how to fly a plane, but here, I was clueless. As I sat there with a tragic-stricken ‘What the hell am I supposed to do now?’ look on my face, a JCB trainer climbed alongside and in some 30 seconds he explained to me what it all meant. ‘Left levers for left track, right lever for right track – push forward to go forward and pull back to reverse. And each joystick has four functions for the hydraulic arm and bucket. Now go drive.’ ‘Uh, sure,’ I replied.

If I have made it all sound complicated, I assure you it isn’t. Within 10 minutes, I was clanging around quite nicely, grinning like a schoolboy whose dream has finally come true. For some reason, I’d always thought, given the way these things look and sound, that their controls would require muscular fortitude way beyond what I possessed. How wrong I was – the controls are lighter than the Passat that I’d driven to the JCB factory! And that’s no exaggeration. Since there is no need for that feel that motoring journalists treat like the Holy Grail, everything is overservoed to the moon and back. Hence that lightness. The first time I used the left joystick to swing the cab in a 360-degree circle, I put too much force and gave my neck a good dose of whiplash. No Passat can do that, eh?

Next up was the 430Z wheel loader. Besides having a name that sounds like one of Nissan’s Z cars, the 430Z has a huge bucket at the front actuated by a single giant hydraulic arm. Climbing up to the cabin, I was happy to see a steering wheel, even though there was yet another joystick to contend with. Everything was super-light again, but what I wasn’t prepared for was the way the whole thing folds in half when you turn! Want to go left or right? Turn the wheel (with two fingers. Two fingers!) and the giant truck-like machine articulates nearly 90 degrees either way. Oh, what a sight!

The 430Z went through and over everything – repeat, everything – that I pointed it at. It will kill the best off-roaders that we’ve driven – forget off-roading, these things are made for no-roading and they pave the way for roads to be built. A click of the gear lever stalk allowed me to select from four gears, though they all felt much like a motocross bike. All in all, it is, and I suspect will remain, the most fun I’ve had at 8 kph.

It took only a couple of hours for Kyle and me to go nuts all over the test track. The JCB guys patiently watched Kyle repeatedly scoop up mud and dump it in the same place, only to do it all over again, and me as I proceeded to set pointless lap times around a track that only I could see in that vast expanse of mud and slush. To say that it was fun will be like saying that JCBs are yellow – blindingly obvious.

Was the wait for these machines worth it? Hell, yeah! Also, these are very expensive machines. The technology and the durability that’s built into these metal creatures doesn’t come cheap and neither does progress, for that matter. Typical life cycle for these things? Well, they aren’t entirely sure, but JCB says that they’ve seen machines going strong for more than 15 years. Can you believe it? Fifteen years working in the kind of conditions they’re subjected to is just too much to even imagine.

Are they worth it? Well, if only we could go back in time and ask the chaps who built the pyramids at Giza. I’m sure they’d have wanted a few of these in a jiffy. Speaking of monuments, that’s what these machines are – rolling testaments to man’s ingenuity. These are the machines that build the roads we travel on and the houses we live in. Always in the background, always going strong. ‘A Product of Hard Work’ is a subtle line on JCB brochures and it sums it up perfectly. Machines that work hard need hard work, eh? Respect.

Past digs - how JCB started

Joseph Cyril Bamford’s dream began in October 1945 in a small shed in Uttoxeter, Staffordshire, England. The shed was not unlike the one where William and Arthur began the Harley-Davidson story, but I suppose all sheds looked the same in those days. In 1950, Bamford shifted to an old cheese factory, employing six people to build his machines. It wasn’t until 1951 that he started painting his machines in that famous yellow hue, while the JCB logo appeared in 1953 along with the first backhoe loader.

JCB landed on Indian shores in 1979 and today, India is the company’s largest manufacturing hub in the world, with the plant at Ballabgarh, Haryana being the world’s largest backhoe loader manufacturing facility. Needless to say, JCB is one of the best known brands ever and famed for its rugged machines across the globe. On August 22, 2006, JCB’s 750 bhp Dieselmax even broke the diesel land speed record by clocking 563.4 kph. Mr Bamford would’ve approved, I’m sure.