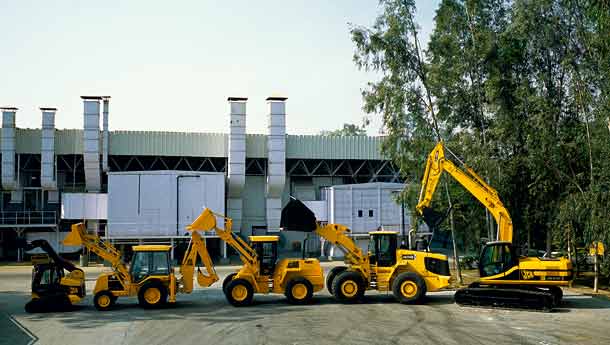 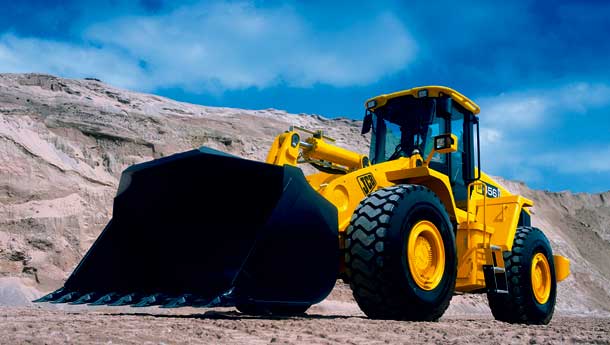 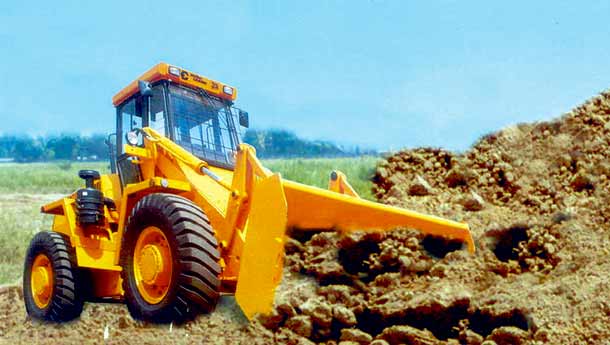 ‘Jeremy Clarkson came to our plant in England once. I showed him how to drive one of these and he enjoyed it very much. So, what do you write about?’ ‘Oh, I’m the travel writer for our magazine, but I also do the occasional car and bike test.’

‘Are you the Jeremy Clarkson of India, then?’ Ray Spooner, the affable GM of Product Development at JCB India Ltd, was obviously speaking with tongue firmly planted in cheek. If I had but a quarter of JC’s writing ability, I’d consider myself blessed. Nevertheless, even though it was just plain old me and the location was Ballabgarh, Haryana (as opposed to, say, Brinkley-on-Toaste, Shropshire) I could see that I was going to have my hands full. However, a little back-story first. I was driving back to Delhi after sauntering around in Rajasthan when my phone rang.

Srini: ‘Hey, you want to drive some excavators and cranes and stuff?’
Pablo: (wondering if this is a joke) ‘Um, sure.’
Srini: ‘Great! Call up JCB Ltd and talk to them, they’ll set up everything for you.’
Pablo: ‘Are you serious or what?’
Srini: ‘Yes, you jackass.’
Pablo: ‘Oh, all right then.’

So there I was, sitting with Mr. Spooner in his office and wondering what I had let myself in for. I mean, lets face it, cranes and earthmovers are driven by beefy men in hard hats who have ‘Mom’ tattooed on their biceps. I, on the other hand, weigh 66 kg and would yell ‘Mom!’ if anyone tried to tattoo me.   ‘Come on down, let’s get started, shall we?’ I followed Mr. Spooner to the company’s massive yard, where I had my first look at what was in store for me. I had to admit, they were an immediately impressive sight. The machines stood glowering in the afternoon sun, like something out of a sci-fi movie. Used essentially for excavating and loading purposes, these huge machines are a ubiquitous presence at any construction site, it’s just that one tends not to dwell on them for too long. Here, parked neatly one next to another, they really caught my attention. If the late Joseph Cyril Bamford (hence JCB, as he was universally known) had stood where I was and gazed upon them, his heart would no doubt have swelled with pride. He made his first product in a rented garage in Uttoexeter, England and started the company in 1945. Today, JCB is one of the world’s top five construction equipment makers, churning out more than 130 different machines. In India, in their 20-odd years of operation, they’ve captured close to 50 percent of the market.

History was the last thing on my mind as I stood in the yard, though. Getting these behemoths in the same frame of a photograph wasn’t going to be easy. A word from Mr. Spooner and the drivers were arranging them in the order I wanted. I was struck by how easily they manoeuvred the machines and told myself that it couldn’t be that hard to drive them around after all. An hour-long photography session followed, the high point of which was me being lifted up in one of the shovel buckets so I could get a bird’s eye view. That done with, I prepared myself for the fun bit... having a go in a few of them.   First up was my personal favourite, the humongous 456ZX. It looked like a monster truck on steroids, and as I climbed into the cabin it looked even bigger than when I was on the ground. Settling into the comfy seat, my feet explored the floor area, as they are wont to do in any new vehicle, and happened to step on a large button. An ear-splitting shriek-cum-yowl tore out of the cabin, causing me to leap in several directions at once and scaring the pants off the unsuspecting people on the ground. It appeared that I had stepped on the horn. I imagine a pilot would have felt rather like I did if he had accidentally pulled the ‘Eject’ lever on his co-pilot’s seat. Calming my twitching nerves, and with Mr. Spooner guiding me, I switched on the engine. Before me lay a steering wheel with a large knob, which I grasped with my left hand and used to move the vehicle left or right. The articulated steering essentially bends the vehicle in two, so I had to keep turning while stepping on the gas in order to bring it around fully. My right hand operated a joystick that controlled the movement of the shovel, while my feet stepped on the accelerator and brake pedals (and most importantly, avoided stepping on the horn). Flooring the gas pedal saw the beast ‘sprint’ to a terrifying 38 kph top speed.

The striking JS 210, a tracked excavator with an extended crane, was next. Frankly, you need to be an octopus to handle one of these things. Two hand-operated levers control the movement of the tracks and the cab itself. Your feet rest on two pedals, which control the things you can do with the crane arm and the shovel, which are rather a lot as I found out. The first few minutes I spent in the JS 210 were a complete shambles. My brain struggled to send simultaneous signals to my limbs, as a result of which the cab turned in random directions, the whole vehicle lurched back and forth and the crane and bucket swung wildly every which way. I very nearly lopped the tops off the eucalyptus trees lining the yard while I was at it. Eventually, discretion won the day, as I abandoned all efforts at moving the machine and concentrated instead on learning the intricacies of efficient crane operation. Even if I do say so myself, I got quite good at it! If I ever get fired from Motoring, I know where I’m headed.

The little (in very relative terms) tracked Robot Skid Steers 190/1110 stood patiently in line, waiting for me to take over the controls. It may have looked small, but, as I discovered, it was no cinch to drive. Moving forwards and backwards was simple enough (one pedal for each movement), but getting the thing to turn required some hefty bicep work. I had to grab the twin joysticks (one in each hand) and fling them left or right, at the same time, to turn it around. Keep in mind that the joysticks also controlled the shovel, and you will begin to understand the spectacle I made of myself. Five feet forward...OK, time to turn...grab joysticks, pull to right...and the shovel lifts up in a smart salute, with the Robot still stubbornly facing forward. A bit of perseverance is the answer to any sticky situation, and I soon got the hang of this machine as well. Had it not been for another assignment the same afternoon, I would happily have played in the yard all day, so to speak. Handling these machines fills you with a childish glee, the sort you experience when you put together your first Meccano set. Of course, it’s another matter that these aren’t toys and have to be handled with extreme care, and by trained drivers.

Having said my thank-you’s and goodbye’s, I got into my taxi and began leafing through the company literature, where I discovered a very significant tidbit. If you look up JCB in the Oxford Dictionary, this is what you will find: ‘a type of construction machine with a hydraulically operated shovel on the front and an excavator arm on the rear.’ Old JCB must be positively tap-dancing in his grave!