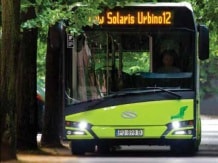 Leading auto component maker JBM Auto will invest Rs 300 crore with Europe's leading electric bus maker Solaris in a joint venture to manufacture electric buses in the country. India will also become Solaris' base to cater to the Asian markets through exports.

JBM Solaris, where JBM will hold a majority stake will invest the money over next three-four years towards engineering, design and development, manufacturing, supply chain management among other focus areas in the project. Solaris happens to be Europe's largest electric bus maker. It has sold over 14,000 buses across 30 countries.

"We will be creating two new platforms for electric buses at our existing bus manufacturing plants. The first fully electrical bus will roll out in April next year," said Nishant Arya, executive director at JBM Group, which forayed into bus manufacturing two years ago and has sold about one hundred buses worth over Rs 100 crore to state transport undertakings and fleet operators. JBM has two bus manufacturing units at Mathura (Uttar Pradesh) and Faridabad (Haryana) with a capacity to roll out 2,000 buses a year.

Twenty year old Solaris will bring its electric bus manufacturing technology to India using JBM's infrastructure and local supplier base. Arya said JBM is working to develop a local supplier base for components in the electric bus. The lithium battery will be imported but there will be a localisation of over 50 per cent in the bus. The average price of an electric bus will be Rs 3 crore but buyers will be able to get government subsidies, Arya said without quantifying the final price to a buyer.