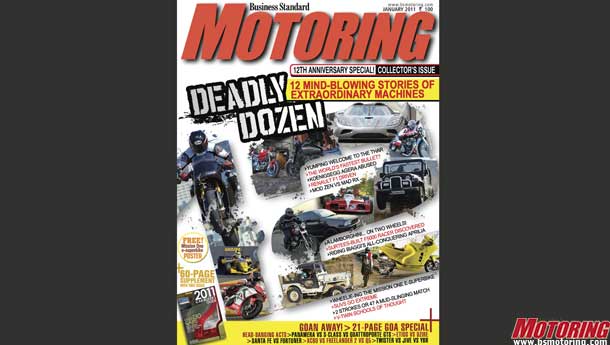 How do we celebrate a dozen years of BS Motoring? Well, with a Deadly Dozen issue, of course! We bring you 12 stories on 12 mindblowing machines!

Ever heard of a Lamborghini motorcycle? Only 40 were ever built and we've got an exclusive feature on one such bike just for you!

Bringing 'Jeep' back! The much-awaited Thar is here, and there's nothing better than a good ol' BSM yump session, is there?!

These chaps don't call themselves Extreme Off-roaders for nothing. They get their vehicles over trails that mountain goats shy away from, and when there's no trail, they keep going anyway!

This one has only two real rivals on land - the Bugatti Veyron and the Pagani Zonda. Armed with an 800-bhp V8 under the hood, we'd recommend you hold on tight as this one gets thrown around the track.

"The acceleration defies belief; the car will hit 160 kph in 4.9 seconds, and it brakes like it’s hit the proverbial wall. " Our man, Nick Hall goes and tries his hand at driving an F1 car around the Hungaroring.

One calls itself a sleeper, the other turns its nose away at the very thought. Both have a drinking problem and one is a chain smoker too. Talk about being in good company.

Max Biaggi won the 2010 World Superbike Championship on this bike. And Alan Cathcart has gone and ridden it too! What a bike, what a story!

It's the best bike ever invented to wheelie on! And you can't hear it coming!

*As unlike as twins

One is an Italian beauty, the other is a big beefy American. They're twins at heart though. So what happens when the Ducati Monster 796 goes head-to-head with the Harley Davidson XR1200X?

Ever thought a Bullet might set the land speed record? This chap certainly hopes his bike will. It's not called the Monster Dog for nothing, we assure you!

Imagine a championship-winning car built by John Surtees, now resting in a palace in India. It's true! We discover the Surtees TS11 002.

We drove a Skoda Yeti and Mercedes-Benz GL-Class to Goa. Drove a Gypsy and Jeep on the beach, took a cruise on a Jeanneau Prestige 36 yacht, spotted a Kawasaki Jetski, found a 'question-mark' Bullet, a bunch of crazy Bullet-riders, and also discovered some Vee Dubs hidden away.

The Suzuki Dzire takes on the Toyota Etios; the Volvo XC60 gets in the ring with the Audi Q5 and Landrover Freelander2; the Toyota Fortuner and the Hyundai Santa Fe have a tiff; and there's a luxo-match on too - the Maserati Quattroporte, Mercedes-Benz S-Class and Porsche Panamera. And on two-wheels, the TVS Jive, Honda Twister and Yamaha YBR 110 fight to be 110cc king.

All that and much more in the January 2011 issue of BS Motoring! Go on, get one!