Special Vehicle Operations division of Jaguar Land Rover has unveiled a bespoke F-Type Coupe high performance support vehicle for Tour de France competitor Team Sky. Based on the brand's F-Type R Coupe, the one-off vehicle will be used during the 54 kms. Bergerac to Perigueux stretch of stage 20 on the July 26th. 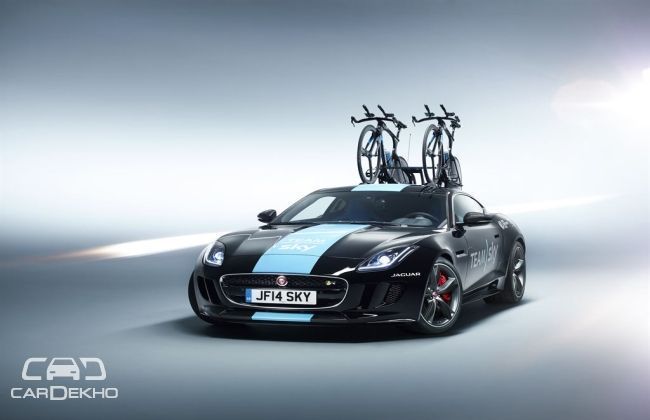 Sir Dave Brailsford, Team Principal at Team Sky, said:"Jaguar is an iconic British brand that has been an integral partner for Team Sky for over four years. We have already benefited from their high performance credentials and expertise in technological capabilities and engineering innovations, particularly with the recent development of the Pinarello Dogma F8. This F-TYPE concept is a world class vehicle that will help get the best out of the team on the TT stages."

The F-Type R Coupe replaces the XF Sportbake support vehicle only for this stage, and has been fitted with a bespoke racking solution carrying two of the team's Pinarello Bolide TT bikes. The vehicle also comes equipped with a separate electric supply in the trunk that powers amplifiers, radios, microphones as well as horns and televisions supporting communications between the team's sports director and the rider. 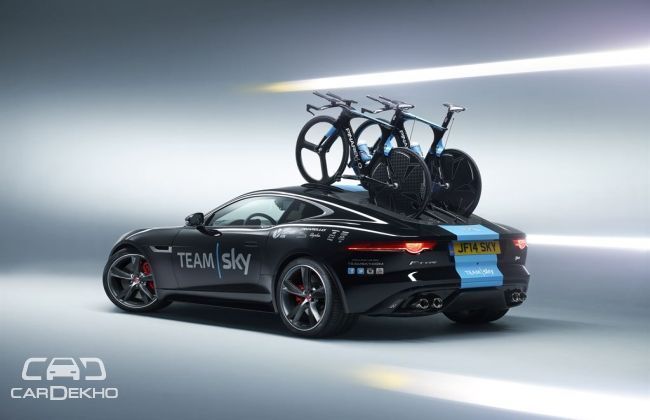 Under the hood, the one-off F-Type R Coupe comes with the same supercharged 5.0-litre V8 engine, rated at 542 bhp and 680 Nm of peak torque. The vehicle wears the Team Sky’s famous livery, with interiors following the same color theme.

LR Global Brand Experience Director, Mark Cameron added: "Jaguar has supplied high performance support vehicles to Team Sky since its first season in 2010. The development of this F-TYPECoupé is the latest example of our shared belief to push the boundaries and provide technologically innovative solutions, both on and off the bike. The visual impact of the F-TYPE Coupéduring Stage 20 will also of course bring added attention to Team Sky and our unique partnership."