Jaguar XE Spied Testing, to be Launched At Auto Expo

Jaguar is all set to introduce its latest offering, XE sedan in the Indian market. The car will make its official Indian debut at the 2016 Auto Expo. Competing with BMW 3-series, Audi A4 and Mercedes-Benz C-class, this is Jaguar’s cheapest offering till date. Bookings for the car have already begin at a cost of Rs. 1 lac and the launch price of the car is expected to be around Rs. 40 lac. This price bracket is courtesy of the local assembly which will take place at Jaguar’s facility in Pune. At the Expo, XE sedan will stand alongside XF sedan and the highly anticipated F-Pace crossover. 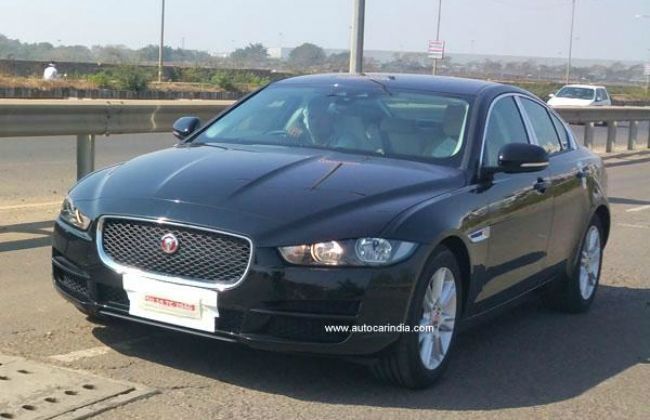 These spy shots appear to be of a lower model as it lacks aesthetic luxuries like DRLs and projector headlamps. Foglamps too are missing on this model which could suggest their absence in the base variants. Despite being the baby Jag, the car still carries signature Jaguar look with the wide grille holding the ‘Wild Cat’ in the centre. The styling of the car is very capable of turning heads and with the hereditary it carries, the Germans are going to have a hard time. Mechanically, this car is built on an all-aluminum chassis which cages either a 2.0-litre petrol engine producing around 194 bhp with 320 Nm torque or a 2.0-litre diesel mill which is capable of producing 161 bhp. Transmission system coupled with these engines will be an 8-speed automatic, powering the rear wheels. XE’s all-new Ingenium diesel engines use advanced technologies like low-pressure exhaust gas re-circulation, selective catalytic reduction and variable exhaust cam timing. XE has also been nominated for the 2016 European Car of the Year award in which it will be competing with six other cars on the basis of technical innovation and value for money.