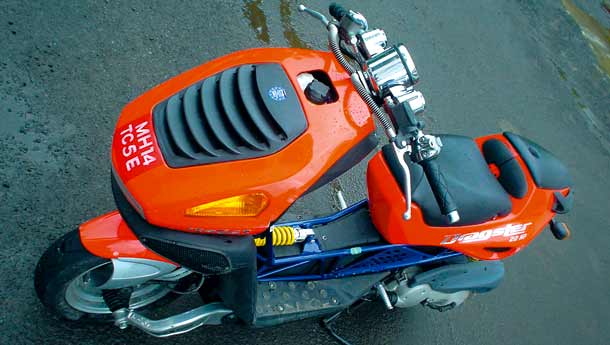 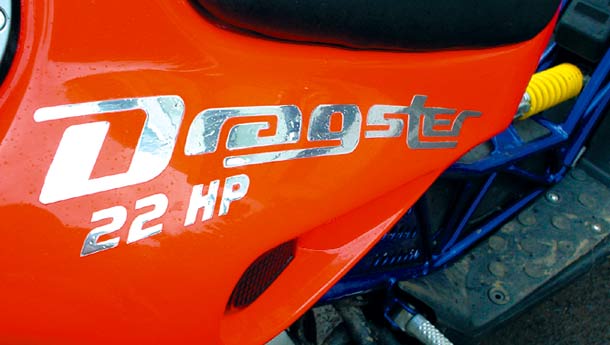 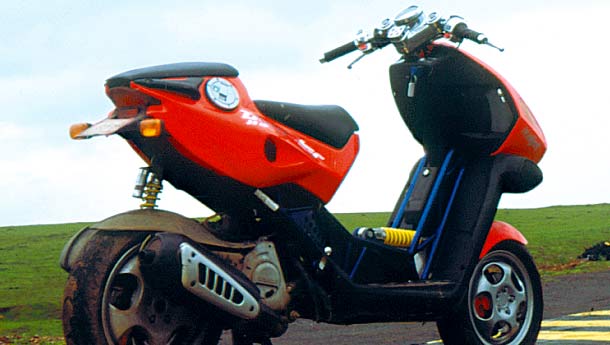 If your life were flashing past your eyes, wouldn’t you want the flashes to be memorable? Would you settle for goody-goody black and whites with social relevance and meek anonymity? Or would you rather have each image packed with maximum possible colour, intense action and absolute truckloads of fun?


The latter, isn’t it? In that case, you should immediately go out and junk that simpering little scooter thingy you’ve been riding  around so far and import one of these babies. You can already see that the Italjet Dragster 180LC is a pretty sensational looking scooter. And it gets a whole lot better when you ride it.

The sweet old man who called us about his pride and joy said, ‘I’ve an Italjet Dragster, the full-house 180, and I’d like you guys to come and ride it. Since Motoring has always been riding and writing about exciting two-wheelers from around the globe, I thought this’d be right up your alley.’ Now, I cannot conceive of a worse part of the year to do feature this kind of a machine – the monsoons are playing truant, and Murphy’s ever reliable. It’s sunny right up to the point when we put the key in the slot and then it rains.

But we just had to agree to brave the weather. I’ve had the pleasure of banging about Delhi’s streets on the Gilera Runner (April, 2001), with which the Dragster shares its liquid-cooled 175.75cc two-stroke engine. And that thing was an absolute cracker. The bloody thing was quicker than a scalded cat taking off, and as insane on bad roads than a monkey on LSD. Sprung sportily, it lacked a little of weight up front and would want to fold at the whiff of a bump mid-corner. Behaviour exacerbated by the fact that I was constantly braking from three-digit speeds!   At his suburban residence, Mr Ahire moves his TVS Victor aside and rolls this orange and blue thing out under an overcast sky. It’s not what you’d call pretty, but is as striking as a kick in the gonads. His eyes twinkle with mischief, ‘Just go for a familiarisation run and then we’ll head out.’All right! I thumb the starter and a quiet two-stroke note says, ‘Hello world.’ Used to piddly 100cc scooters, I whack the throttle open and leave the man’s courtyard in a motion blur that Photoshop would find hard to replicate. The clutch takes a moment to bite and then there’s another tiny pause while the motor gets to the powerband. From then on, the rush forward is unrelenting and can be frightening the first few times.

The Dragster will shoot past 100 kph in a supercar-thrashing 4.8 seconds and has a huge top speed at 148 kph.Which is why my life is flashing past my eyes. You see, we’re on the roads of a colony which might get houses in another three years. But for the moment, it’s just chunks of real estate with some basic roads already laid. The roads have been ravaged by the monsoon and gravel, potholes and undulations make up the most part of our runway. And my speedo, obstinately Italian, refuses to back down below 120 kph. Fortunately, the Italjet has 175 mm disc brakes on both wheels, with sporty red callipers which are tremendously effective, and frankly, scary as well. The first few rides are like being stuck bang in the middle of Freddy vs Jason.

The braking efficiency (and as we will see, handling ability) is partly down to the innovative suspension, on which Italjet has patents. The front suspension has a single-sided swingarm which connects to a sunburst yellow, adjustable Paioli suspension unit mounted horizontally on the footboard between your legs, inside the trellis frame.The steering forces come from the handlebar through light articulated rods that pivot on the front swingarm. The separation of braking and steering forces allows the Dragster to brake tremendously hard without any dive and consequent loss of steering ability. It is just fantastic. The rear suspension has a three-piece alloy swingarm and transmission case that pivots on a centrally mounted Paioli shock with a piggyback reservoir. The arrangement serves to keep the centre of gravity low another factor in its slick handling attitude.The suspension and chassis make this buzz bomb one of the best handling scooters in existence. The swingarms, short and stubby, move through tiny arcs, keeping the wheelbase nearly constant for great handling. In fact, this seems to be the only scooter on which trail braking is actually worthwhile.

Unlike the Runner, the suspension is more compliant and even on a relatively bumpy road, while the bike and rider are bouncing about a fair bit, the Dragster will still manage to put the power down. Imagine high-tailing down a dirt-trail about 50 kph faster than you are comfortable with, and you’ll get the picture.   The trellis frame is superbly stiff and the handling abilities of the Dragster are a legend. The fat tyres stick like Araldite and you can get some serious lean angles on this thing. On our particular day, I didn’t quite have the conditions required for a knee-down, but I’ve seen enough pics on the net to know that the Dragster is more than capable of that sort of shenanigan.

When Italjet unveiled this devil in 1998, the scooter world held its breath. Six years on, the same holds true. Designed by Miguel Angel Galuzzi, the same pen that drew the Ducati Monster created this. The frame and bodywork are just pure fantasy and the massive snout gives it a mean, brooding yet somehow mischievous look and houses the radiator for the liquid-cooled motor. The chrome meters do look a bit out of place, but you don’t really mind.

The thinly padded seat looks like it could look good on a sportbike and the pillion pad is display only. A car-style filler on the side, dinky tail lamp with a small number plate, round out the look.Blue frame, yellow shocks and skimpy flashy orange bodywork – you couldn’t get a much tricker Dragster. Unless, of course, you found one of those mad, nitrous-equipped ones that are quite popular among scooter enthusiasts in Europe. The Dragster has quite a fan following and among the legions are thousands who employ big bore and performance bits from Malossi for blow the doors down on much bigger machines. Some of these actually post 14-second quarter mile times. How demented is that?

After an absolute hoot riding the Dragster, I asked the smiling owner of the wheres and whys of his firecracker. He said, ‘I imported the scooter after finding some pictures on the net and reading a few reviews. I’ve been riding it about town since December 2003, and it never fails to turn every head in the vicinity.’ He goes on to add that he bought this Italjet because he wanted a gearless scooter fast enough to thrill and the Dragster seemed like the ideal thing.

In hindsight he says Kinetic’s deal with Italjet is a godsend because it might just make it easier for him to get spares and service in next-door Pune. Kinetic-Italjet does generate some tantalising, if utterly impossible possibilities. All I can say is that the Italjet Dragster 180LC should, by rights, be on top of Kinetic’s Indian launch list. And I know it won’t be. It has no practical applications whatsoever, and is built for one thing, and one thing only – fun. Which, is exactly why I’d love to own one. It’d also bring loads of colour to my next life-flashback.

We would like to thank Mr Ahire for allowing us to play with his explosive scooter.