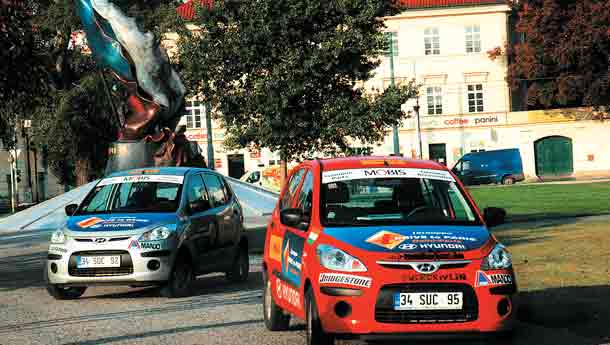 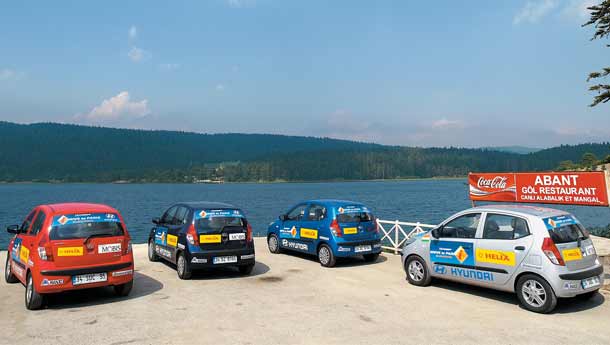 The sight of armed soldiers walking towards you in a forthright catmanner can be somewhat unnerving, especially if they’ve seen you doing something you really shouldn’t be doing. The sense of alarm tends to be even more pronounced if you’re in a high-security area, such as at the mausoleum of a nation’s founder – which is exactly where we, a motley bunch of motoring journalists and Hyundai officials, were. That morning, we had driven to Kemal Ataturk’s mausoleum in Ankara, the capital of Turkey, in the hope of shooting some representative stills and footage of the i10 Kappas that we had driven in from Istanbul the previous day. We were immediately subjected to searching questions about our intentions (and the cars to searching… well, searches for the odd explosive or two), and after much discussion among themselves and mysterious higher-ups, the security officials decreed that we could only go in and shoot stills with ‘non-professional’ cameras.

That immediately ruled Kartikeya Singhee (UTV’s auto man) out of any further fruitful activity for the morning, but we all decided to go in and take a look anyway, having come thus far. Our little convoy of four i10s rolled up slowly to the parking lot alongside the Parthenon-style monument, and on the spur of the moment we decided to park them in an out-of-bounds area so we could take pictures of them against the structure. This is when the aforementioned cavalry showed up, and I was just tensing myself for a fatal volley of shots when it became clear that they were just curious about the cars, the i10 having just been introduced in the country and therefore a rare sight on its roads; further, our cars were gaily decorated with stickers of all sorts as well, making them true stand-outs. While Hyundai’s reps fielded questions from Turkey’s finest, we quickly concluded our shoot and decided to make ourselves scarce, in case the soldiers had a collective change of heart and began reaching for safety catches.

What were we doing getting up to minor mischief in Turkey, however? Well, Hyundai had decided to organise an event wherein a couple of i10 Kappas would be driven from Istanbul to Paris, through several European countries, arriving in time to be displayed at the Paris motor show. There was to be a Turkish leg too, an Istanbul-Ankara round trip, before the cars set off for neighbouring Greece, and this was the section I had been assigned, along with other colleagues from the automotive press. As to why I wasn’t going to Greece as well, don’t ask; there lies a tragic tale of last-minute preparations and recently expired Schengen visas. In point of fact, I was lucky to have been there at all, acting as a stand-in for Srini who, in one of those providential (for me, not him) twists, had been struck down by a passport with insufficient pages. I certainly wasn’t complaining; it’s been a long-standing wish of mine to go to Turkey, and the chance to drive around inside that country was an added bonus.   It was in Istanbul, that fascinating city and erstwhile gateway to the Orient, that the drive began. We had arrived on a beautiful, sunny day and begun our Turkish sojourn with an excellent meal of kebabs, salad and mind-alteringly good Turkish coffee, after which a siesta was in order. Duty called, however, and we changed into our official Hyundai threads and were ferried to the company-run showroom – which happened to be on another continent. You see, Istanbul enjoys the unique privilege of being situated both in Europe and in Asia, with the Bosphoros river cleaving the two sections, and we were headed for the European half of the city. As we discovered, Istanbul is huge; it took us almost an hour to get to our destination, through fairly normal traffic, and we arrived to get our first glance of the cars we were to be driving. A bevy of attendants were fussing over them, lovingly applying stickers on their being, and at the end of it all the cars looked really natty.

The i10’s a cheerful little number to begin with; the stickers upped that quotient a fair bit. We busied ourselves in the showroom premises, drinking endless cups of excellent machine-made coffee and fiddling with the cars on display. There’s hardly any difference in the way a Turkish and an Indian Hyundai showroom are set up, by the way; the layouts, colour schemes and so on are almost identical. A couple of photo shoots later (the entire top echelons of Hyundai Turkey were present), we heard the welcome words ‘Shall we proceed to dinner?’ The said meal was a truly memorable affair, with a breathtaking riverside venue, a great view of one of the bridges across the Bosphorus (it’s a real sight when they switch on all the lights on it) and, of course, all manner of sumptuous dishes. Ever seen a whole fish baked in a three-inch thick casing of rock salt? Turkey’s the place to do it.

On to the main course, then – the drive itself. A few more photos and we were away, winding our way through Istanbul’s slightly nutty traffic. ‘This isn’t so different from back home’ I thought, upon witnessing numerous wrong turns, impressive lane-cuttings and a fair sprinkling of cursing. It was quite endearing, to be honest, and in any case once we were out on the Istanbul-Ankara express highway, things got a lot better. It has to be said that those Turks know how to build roads; we were on a brilliant 6-8 lane stretch for virtually the entire 420 km journey, and it was a pleasure to be able to hold speeds of above 120 kph without the nagging feeling that around the next sweeping bend might be a truck, thundering down the wrong way and eager to make intimate contact. The i10 was, to be honest, a little out of its league in those conditions, being buffeted by passing trucks and buses and struggling a bit to go up inclines at a rapid pace.

Even northwards of 100 kph, other cars were blowing past us regularly (this tells you something about the healthy lack of regard for speed limits in Turkey). Nevertheless it tried gamely, with a full complement of passengers and luggage (and a brand-new engine, still to bed in nicely) performing without cause for any complaint. It was as easy to drive, and as much fun, as ever and held its line very well through fast, sweeping corners. And please, Hyundai, give us those nifty 14-inch alloys in India too. Our arrival in Ankara was quite swift, and the next course of action was, you guessed it, dinner. Much as I’d like to, I cannot dwell too long on Ankara because we hardly saw the city; what I can tell you is that it has a lively nightlife, especially during the month of Ramadan, when the whole city comes out en masse to eat and let their hair down. The thought of the return drive to Istanbul the next day, along exactly the same road, was a bit boring, truth be told.

I mean to say, an 8-lane highway is an 8-lane highway, at the end of the day; thus, a diversion was planned to Bolu, a national park of sorts that we were assured was worth a visit. It most certainly was – winding roads through forested areas culminating in a stunning lake. En route, we passed little villages, again not too different from similar vistas in, say, Himachal Pradesh, and the weather became decidedly more agreeable. It was the ideal place for more photos, not to mention a superb lunch of grilled fish fresh from the lake (and chicken, and lamb, and vegetables). Had we been given free reign, we would undoubtedly have stayed behind there for a day, but the cars were needed back in Istanbul for the next day’s drive to Greece; we left Bolu behind with some reluctance. It was another smooth drive back into Istanbul, this time at night, and the city was quite a sight, with all its mosques and minarets lit up. Our quaint hotel, in the heart of the old section of the city, had a rooftop restaurant with the most fabulous views out over Istanbul, and the combination of the food, the beverages and the view was heady indeed. Sure, I was going to miss out on the drive to Greece, but I had an ace up my sleeve – I was staying behind to explore Istanbul for a few days. Now that is what I call a perfect end to a memorable trip!