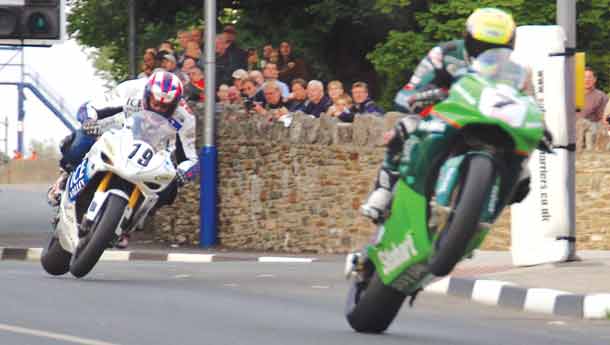 It’s Joey!’ The voice in my head began to yell in excitement when I spotted a slight young fella clad in the well-known red leathers, casually carrying the familiar yellow Arai helmet, an image topped by the regulation sloppy hair-do. Moments later, a hard whack from my own hand to the back of my head pops me back to reality – the King of the Mountain has been gone seven years now. But his legend definitely lives on in the form of die-hard Joey Dunlop fans.

This kind of eccentricity is fundamental to everyone who sets foot on this little island in the middle of summer. What other explanation is there for the 87-year-old lady sitting calmly in her wheelchair at Governor’s Bridge, watching the motorcycles blur and whoosh by with just a few feet to spare? It turns out that it’s her 30th consecutive visit to the TT, and that it has been a decade since her husband last came to the races with her. ‘Today he watches from the best seat on the Island’, she tells me, ‘he’s up above.’

Then there’s Ian, my house mate, a cop from the mainland. He’s recovering from having broken every other bone in his body in a motorcycle crash. Every joint in his lower body cricks audibly as he gets off the couch to pop a painkiller or two. The pills are an hourly ritual. He says, ‘It was a feature in TWO [the excellent British motorcycle magazine] that told me I’d be missing something if I didn’t come this year. Next year, I’ll be here too. On my [BMW] K1200.’ His promise is dead serious.

Beating the lady and Ian in the eccentric Manx fans stakes is John Maddreil. The septuagenarian is a marshal at the pub on the Crosby straight, a resident of the Isle and owner of eight motorcycles. He stands out because he has never once attempted to race in the TT. His kick in life is marshalling. And he’s been living the life for 37 years. ‘Really? You never even thought of going racing? Why?’ He gives me a straight faced answer, ‘It’s for heroes.’It isn’t just the people either. The atmosphere is eerily electric. I felt it the moment I rolled out of the damp hull of the catamaran on my Suzuki SV650. Hundreds of motorcycles are revving to get out. The smell of unburnt fuel, the millions of revs, leave my hair standing on end. This is as electric as being plugged into a wall socket. A total of 80,000 TT fans and the spirits of every single TT hero – riders, marshals and spectators have come down to Mona’s Isle to pay homage to the world’s greatest motorcycle road race, and binge at the Isle’s biggest beer fest in a hundred years.From the idle chatter on the ferry, I’ve gathered that the big British hope is John McGuinness. He’s the man, they say, who will break the much discussed 130 mph lap (that’s 208 kph over 60 kilometres. Average speed). Some think the Kiwi Bruce Anstey’s the man to do it, he’s riding a wave of wins. Still others are betting on Michael Rutter, another TT nutter (sorry, couldn’t resist) who is making something of a comeback after seven years. Rutter’s helmet-scraping-armco antics in Macau, another frighteningly fast and hard motorcycle race on real roads, have not gone unnoticed.

But there are still a few days to go to the TT and there’s tons of stuff I’m going to do. The re-enactment of the TT, for instance, is a must. It’s got Rem Fowlers’ original Norton, which won the first TT, leading a pack of classic racing motorcycles. And everybody’s going to pretend like it’s 1907. But on top of my list is lapping the fabled TT course. I quickly discover that the Isle of Man does have speed limits, except, for the Mountain Section from Waterworks to Creg-Ny-Baa (Creg to us TT regulars). That one section is flat-out around the year. For the TT races, it’s also one-way.

The current TT course is not the most technical of motorcycle race ‘circuits’ in existence, this much I gather from my numerous laps. Skill is a good asset, but far more important for fast lap times is the size of the bulge, if you know what I mean. Corners are fast, except for a handful of them, with ancient stone walls placed precariously close to every corner exit. ‘Magical’ bales of straw – the type that are supposed to prevent you from hurting yourself at 300 kph – cover street signs, poles and other potential hazards. The mountain section from mile marker 22 to 35 have none of these hazards. If you have an off, you get embedded firmly into the beautiful landscape. Which is better, I have still to decide. Then there are the jumps where almost everyone gets air. Bray Hill (see pic) is superb, but the jump of all jumps is at Ballaugh Bridge. Every time my SV would eagerly crest the rise, I would gently rein it in – 400-odd units of the Queen’s currency is my don’t-crash-the-bike deposit. That’s Rs 32,000 saying don’t even scratch the bike. I’ll just have to save the heroics for later. I’ll be back.

I was also witness to a few acts of bravery, stupidity and attempted suicides during the trip. Suicide was actually a father-son duo who decided that the best seats were on a grass embankment at Brandywell, a corner up on the mountain section. Then Bravery, mounted on a screaming Kawasaki ZX-10R came hurtling towards them after a failed late-braking manoeuvre. Shards of flying plastic and a 160 kg motorcycle didn’t curb their enthusiasm one little bit. Until Stupidity arrived on a Bandit 1000 a few minutes later, ran wide, hit the embankment, took flight and lodged himself firmly in a ditch while the Bandit got tangled in the barbed wire fence.

A Canadian chap and I were at the scene to help out. If you’re reading this Mr Bandit-at-Brandywell, you have the luck of the devil himself. And thank God the Twin Squirrel rescue chopper arrived within minutes and you’ve lived to tell the tale, suffering nothing more than those broken ribs.The glittering star in the pre-race insanity is Mad Sunday, held the Sunday before race week. It’s the day all the motorcyclists leave their brains at home, strap on their kit and hit the track at full pelt. They try to prove to their peers that they’re the next John McGuinness, Bruce Anstey, or the biggest squid in town. Paramedics tend to call it Painful Sunday, for they really get to earn their living on this day. Police, thankfully, take a far lighter view of the proceedings. This year, however, rains lashed the island, forcing the authorities to close off the Mountain for most of the day. Fans were left with the only alternative legal narcotic on the Isle – Okell’s, Manx’ own beer. With ale gushing through everybody’s veins, Douglas Promenade turned into burnout central. The burning rubber set off fire alarms inside the roadside pubs and the Plod arrived in no time, and more or less cheered the guys on. The cops are pretty focused – as long as safety is not a concern, anything goes. 80,000 barrels of beer were glugged down during TT week. Which, is the annual production of many a brewery in the UK!

‘Mad Sunday was brilliant. We’ve recorded just eight casualties and no fatalities.’ the voice on the Radio TT announced. Brilliant? Really? Today is the day when the party is put on hold and the racing’s put on the afterburner. The roads close at 10 am and you can feel the sense of urgency as you roll out of the driveway. Everybody’s riding like zombies with just one agenda – ring side seats. Oh, make that three, they also want tea and fruit cakes. With 20 minutes to lockdown, I ride out to Brandywell to watch my first race of the Centenary TT. This will be my ritual for the next four days. Each day, a different spot, new friends and new stories.

Emotions run high and spectators are at the edge of their seats, or of the embankments that line the road. The sighting of a landing med-evac, a mistake on part of the rider, or a crash casts a cloud of gloom almost immediately… like when Shaun Harris crashed seriously at Union Mills, or when TT-rookie Marc Ramsbotham crashed fatally near the Verandah. Smiles became frowns. Frowns turned to tears and the ever-present music faded away.Until the sun rose again and engines were warmed up for the next day’s racing, that is. The Isle of Man is magical. It’s the Mecca of motorcycling where American chrome and Japanese plastic live in harmony. The only exotics are the old British men and their Vincents and Broughs. And every leather-clad biker who is flagged off from Glencrutchery Road is already a hero.

A big thank you to Suzuki GB for loaning me a brand new Suzuki SV650. Special thanks to Suzuki’s Clair Procter who went out of her way repeatedly to help me and without whom this trip would not have been possible.