Is Sudarshan's appointment at TVS premature? 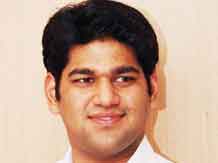 Unlike other annual general meetings (AGMs), where at least one or two shareholders oppose the appointment of new directors or question the re-appointment of current ones, TVS Motor's resolution to appoint 24-year-old Sudarshan Venu (son of Chairman and Managing Director Venu Srinivasan) as director was unanimously passed. A few shareholders at the company's AGM on Friday even went up to the stage to bless him and offer him advice, including driving a two-wheeler once in a while. Sudarshan was appointed director of the company for five years effective February 2013.

This came at a time when proxy advisory firm Institutional Investors Advisory Services (IiAS) was campaigning against Sudarshan's appointment. "Though academically, he (Sudarshan) is well qualified, he doesn't have enough experience to be on the board," IiAS had said. It also questioned Sudarshan's remuneration, which it claimed was Rs 4.17 crore a year (including a commission of up to one per cent of net profit and annual salary). Comparing Sudarshan's appointment with other cases, IiAS pointed to how other heirs had spent time in the businesses before being elevated. Rajiv Bajaj, 45, son of Rahul Bajaj and managing director of Bajaj Auto, had joined as a special officer (manufacturing and supply chain) at 22. Rishad Premji, 35, son of Azim Premji and chief strategy officer at Wipro's information technology business, had joined the company at 29, as business head for special projects in the banking and financial services division. Venu Srinivasan, too, had worked at the factory level before being elevated to the highest levels on the company in his late 20s. However, many have defended Sudarshan's appointment, saying he ensured he had the right academic qualifications from some of the world's most prestigious institutes. In 2010, he graduated with honours (Jerome Fisher programme in management and technology) from the University of Pennsylvania. He had pursued a bachelor's degree in mechanical engineering, as well as one in economics, from Wharton School, University of Pennsylvania. Sudarshan also has a master's degree in international technology management from Warwick Manufacturing Group, a department at the University of Warwick, UK.

While pursuing the master's degree, he underwent training in the die casting division of Sundaram Clayton, as well as in TVS Motor Company.

Sudarshan came to the limelight in 2011, at the launch of the Phoenix, a 125-cc bike. Many termed the launch as an "unofficial" announcement of Venu Srinivasan's succession plan. Sudarshan drove the new bike and was photographed with his father, as well as the rest of the management team. Till then, Venu Srinivasan was the one first seen on new bikes.

In an interview at that time, Sudarshan had said this was the first product he had been associated with, from the early stages. "We have a challenge on our hands, due to lack of products in the right spot," he was quoted as saying in a report. Sudarshan's supporters said Phoenix was an example of his understanding of the preferences of the new generation. TVS Motor, losing market share and reporting declines in sales, has managed to sell about 10,000 Phoenix models so far. In the last three months alone, the company's market share increased about 0.5 per cent; the increase was attributed to the new Phoenix, said K N Radhakrishnan, president and chief executive officer of TVS Motor. The media-shy Sudarshan wasn't available for comment.

The road ahead for Sudarshan is challenging, considering the market is seeing turbulent times. Besides, the company has promised shareholders it would record a better performance this financial year. TVS Motor had predicted the industry would contract five per cent in 2013-14. The tie-up with BMW in the sub-500-cc segment would also demand the attention of Sudarshan, known to be passionate about BMW products.

With the market sluggish and competitors aggressive, as acknowledged by Venu Srinivasan, driving TVS Motor ahead would be a tough task for its new director.