Is Ignis the new name for the Suzuki iM-4?

The growing popularity of sub-compact cars can be attributed to the road infrastructure and traffic conditions available in India. To capitalize on this plightful situation, earlier this year Suzuki showcased the iM-4, which is a compact SUV. The reveal took place at the 2015 Geneva Motor Show. Ever since the patent images of the car surfaced online, it was evident that the inconspicuous car is all set to hit the production line and recent reports suggest that Suzuki will resurrect the Ignis brand name for this particular model. Suzuki sold product under the Ignis moniker in international markets from 2000-2008. The images that surfaced on the Suzuki Instagram fan page were that of a production-spec model and posed immense similarity to the iM-4 concept car. 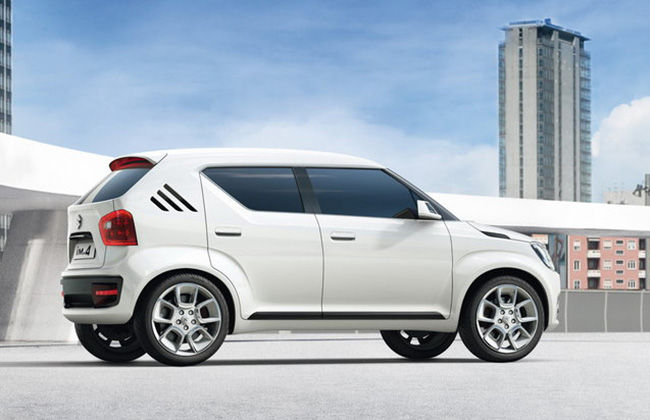 The production spec iM-4 or Ignis is expected to get a 1.0-litre 3-cylinder Boosterjet engine, which will make its debut in the new Suzuki Baleno. The car might also get other engine options, which may include the Euro-spec Swift’s 1.2-litre Dualjet engine and the Fiat sourced 1.3-litre diesel mill.

There has been no official word released by the company on this matter and it is still unclear if Ignis will make its way to India. Maruti has been working on a compact SUV, which is set to hit the Indian roads quite soon and it is codenamed the YBA. From the images of the YBA that cropped up online, it is evident that the car draws its inspiration from the XA Alpha Concept, which was showcased at the 2012 Auto Expo. It will be quite interesting to see how close the production spec model is to the original concept.

This is not the first time that Suzuki has brought in its ecstatic concepts to production. Previously, the Kizashi and the A-star models were also subjected to the same treatment. This facilitates cultivation of excitement for Suzuki’s upcoming projects. The sheer striking presence of the concepts revealed by the Japanese automaker, makes one wonder what they will come up with next and how true will they stay to the original design? Also read:Patent Images of Suzuki im4 Concept Surface