DSK Motowheels, part of the diversified DSK Group, forayed into the niche superbike segment in 2012. Shirish Kulkarni, chairman, DSK Motowheels, discusses the company’s achievements and its plans for the future in an exclusive interview with BS Motoring: 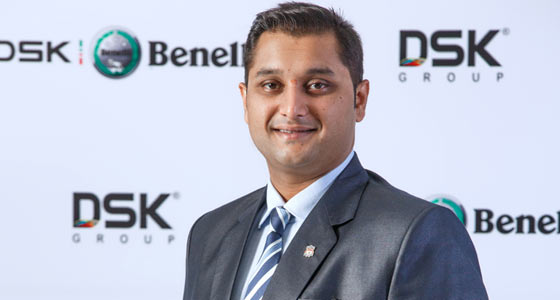 How many Benelli superbikes have you sold nationwide since the launch of the Italian brand in India? Which are your major markets?
We have sold around 2,200 bikes since we launched the DSK Benelli range in India.

We see widespread potential from across the country. With a strong presence through 16 sales and service outlets across all metropolitan cities, we are increasing our footprint further by entering tier II and tier III cities pan-India. In fact, non-metro cities are showing immense potential. As per our research, demand for powerful superbikes in these markets has gone up by 60% in the last four years. Consequently, we are looking at widening our footprint in these lucrative geographies in a major way.

What kind of growth do you expect in 2016?
We are very optimistic about our growth in 2016. Superbiking aficionados and industry experts alike have discovered the superlative brand value that DSK Benelli reflects and have recognised the unparalleled biking experience that the brand offers. By the third quarter, we’ll also launch the DSK Benelli Tornado 300 and the DSK Benelli TRK 502, which will further ramp up the numbers. Therefore this year is going to be an exciting one for DSK Benelli.

Considering the current and upcoming range of products, we are targeting 5,000 units for this year. We are also looking at opening 16 more showrooms in 2016-17.

Could you provide an overview of the superbikes market in India? What is the total market for such bikes?
The market for superbikes is growing at an accelerated pace. As more and more people discover the adrenaline rush that riding a powerful bike with exceptional styling can offer, the number of customers who wish to own a superbike is mounting exponentially.

According to data from the Society of Indian Automobile Manufacturers, considering only superbikes that come via the CKD and CBU route, the industry has recorded 38 percent growth in this financial year. These numbers exemplify that superbike enthusiasts are going all out and are willing to spend considerable sums to own the motorcycle of their dreams.

With growing competition, how do you plan to expand your share of the market?
With DSK Benelli, the response has been tremendous since its launch in March 2015; we launched five revolutionary Italian superbikes from 300cc to 1131cc, offering a wide range to consumers at different price points.

We also recently launched the first 250cc Italian superbike in India, the TNT 25, which has also received excellent response from the market. With the beginning of a new year, we are also set to launch four new products in the Indian market in the coming future.

Today, we stand tall with 16 sales and service points across India, which is also the largest in the industry after DSK Hyosung. To take things a notch higher, we are looking forward to set up 16 more showrooms pan-India by the end of 2016.

So as you can see, there is a lot that has happened since the launch, and there is a lot that we have to do, as we are determined to deliver on our promise to not only expand our reach but also introduce a unique range of Italian superbikes at very competitive price points, in order to meet with customer expectations.