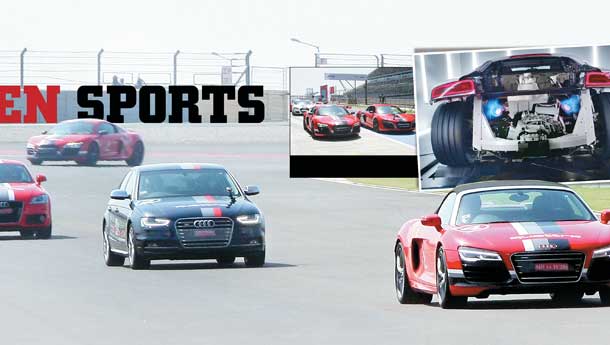 Assumptions are usually no good, my school teacher used to tell me. Sound advice, no doubt, but those times were hardly moments of epiphany, because I usually used to be busy thinking about whether there was butter chicken in the tiffin or whether the prettiest girl in class would end up sitting beside me. Lame, I know.

That sound advice would’ve helped a lot in the case of the new Audi R8 V10. I naturally assumed, in this particular case, that the new R8 would still be the German banker’s sports car, a rum-n-coke version compared to the Kahlua-on-radioactive-waste Lamborghinis. As a matter of fact, the first review that I wrote for BSM was of the goalpost-shifting R8 V8 a few years ago and I assumed that this 2013 V10 Plus would display the same kind of aggression but as always, on a tight leash.

This isn’t quite the case now. Firing up the new V10 and muscling it around the racetrack as fast as you dare is akin to trying to tap-dance with a pissed-off dinosaur with Tabasco in its eyes. Crucially, everyone agrees that it’s certainly not just a sports car any more, but they’re not so sure if it’s crossed over into supercar territory either. So it got its own new designation – super sports car.

Firstly, there’s the 25 bhp firepower boost on the Plus, taking the power figure right up to 550 bhp (!) and also, right up the 458’s chuff. The surprise of the power gets you more than anything else. 0-100 kph in 3.5 seconds and a 317 kph top speed is proper road-rocket territory, neck-and-neck with the Gallardo Superleggera. Despite being the friendliest and most manageable of the super sports car lot, it can deliver ferocious supercar pace when you ask for it. The raging V10 is accompanied by a rorty, stoically Teutonic soundtrack which, given the mid-engined layout and 8700 rpm rev ceiling, is played back in Dolby-approved surround sound glory.

At full chat, it’s a glorious experience for the senses, and every time the rev-limiter kicks in like a massive jackhammer, you go ‘Bwahahaha!’ and…breathe….and then ‘Bwahahaha!’ again. When you make embarrassing sounds like that, you know it’s quite a car. The earlier R-Tronic ‘box has been ditched for a twin-clutch 7-speed S-Tronic,
and the difference is there for you to see. Particularly on aggressive downshifts in the braking sections at the BIC, the tail isn’t unsettled post every shift. And it hammers out quicker shifts than ever.

Turn up the pace and the V10 Plus hunkers down with a keen focus; everything comes together for pure speed and it goes around chomping apexes like Pac Man on a mission.

A strict carbon fibre diet has ensured a 50 kg drop in mass, while the suspension and the chassis have received some Nurburgring love. It’s sharp as hell, the steering is rich in feedback and precision and the carbon-ceramic brakes, my lord, make it their life’s mission to make you stop on a dime. All good for an F1 track, but since the Plus runs stiffer, I believe it wouldn’t be as comfortable on our roads as one would like – but let’s wait for a full road test to figure that bit out.

I drove the impressive S4 as well, but after the manic V10 experience, that memory just went ‘poof’. For all its ferocity and precision, it’s a doddle to get in and go fast and it’ll probably maintain that docile, uncomplicated nature even on your grocery runs. That, in my opinion, is the essence of the R8. It can turn into Gothzilla when you want some madness and a teddy bear for times when you don’t. Now, ` 2 crore or not, that’s a quality that’s hard to find at any price range.