The Infiniti QX30 has been unveiled by the Japanese automaker and it is the company’s all­new, all- wheel­ drive crossover. Infiniti showcased the QX30 concept at the Geneva motor show and the production­spec QX30 is a very close derivative of the concept. On the exteriors, the car flaunts Infiniti’s mesh grille design sandwiched between chrome accents at the top and the bottom edges. The car also features a prominent faux skid plate, which incorporates dual­ exhausts, black body cladding and also gets the ride height raised by 45mm. Infiniti QX30 (same verb repeated) could be is equipped with a windshield that is raked at a sharp angle and LED tail­lamps. 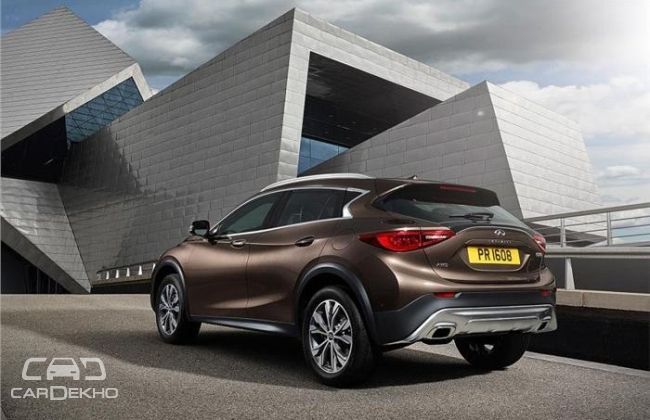 On the inside, the QX30 crossover also comes with a 7.0­inch touchscreen infotainment system, similar to the one seen in the hatchback version. The crossover also comes with various safety equipment, inclusive of Around View Monitor, adaptive cruise control and a parking assistance system. The crossover also features anti­-roll bars and a reworked suspension setup which incorporates stiffer springs. Under the hood, QX30 will probably share the same power­-plant options seen in the AWD Q30, which happen to be a 2.2­litre 168bhp diesel and a 2.0­litre 208bhp petrol motor. Globally, the QX30 is expected to go on sale sometime around mid­2016 and will compete with the Mercedes­-Benz GLA and BMW X1.