India’s largest carmaker Maruti Suzuki (MSIL) is likely to transport at least half of its cars via Indian Railways by 2030.

“MSIL has drawn up a plan, based on which at least 50 per cent of its cars will be transported through the railways,” said a senior government official.

The national transporter has already conducted several rounds of meetings with various industry stakeholders like the Society for Indian Automobile Manufacturers, MSIL, Hyundai Motor, Tata Motors, and automotive logistics providers to boost its automobile portfolio. It is betting big on the automobile industry to increase its freight share by the end of the next decade.

“For the last four years, we were trying to use the railways more as a transportation medium. For that, we were pushing for more rail sidings, for easier loading and unloading,” said R C Bhargava, chairman of MSIL.

The company is now using around 30 rakes for transportation of its cars, of which more than half include flexi-deck auto-wagon rake, specially designed by the company. An industry expert told Business Standard that one of the factors that may be attracting auto companies towards the railways will be lower transportation cost and decrease in carbon footprint, compared to roads.

Bhargava added that though 50 per cent may not appear realistic, a larger share of its cars may be transported by the railways by the end of 2030.

According to reports, the share of railways in the country’s automobile transportation business is less than 10 per cent. To tap the rising market, the railways had also ordered 20-car carrier rakes, each with a capacity of carrying 360 cars in 2018. 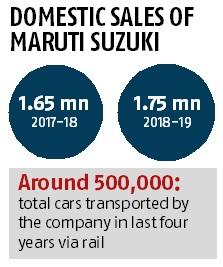 The railways official added that to attract more interest from automobile majors, the railways had liberalised automobile freight train operator (AFTO) policy to encourage more private investment in special wagons last year. The registration fees for AFTO scheme was reduced from Rs 5 crore to Rs 3 crore, and a condition of a minimum procurement of three rakes under the scheme was also relaxed to one rake.

ALSO READ: How Maruti suppliers are reorienting strategies after diesel phase out plan

“A few service providers, including APL Vascor and Adani Logistics, too, have got licences for automobile transport. We expect more players to come under the AFTO scheme,” he said.


Maruti had started tapping the railways using flexi-deck auto-wagon rakes in 2014 from Gurugram. Later in 2016, the railways started its auto-express, which delivered cars in a time-bound manner. Since March 2018, Maruti has also started loading rakes from Detroj near Ahmedabad, increasing the railways’ earnings from this segment by 18 per cent in FY18.


At present, around 28 routes have been notified for operation of bi-level auto car wagons by the railways rakes. Already, rail auto hubs are functional in Walajabad (Southern Railway) and Farukhnagar (Northern Railway), while authorities are planning to set up more.