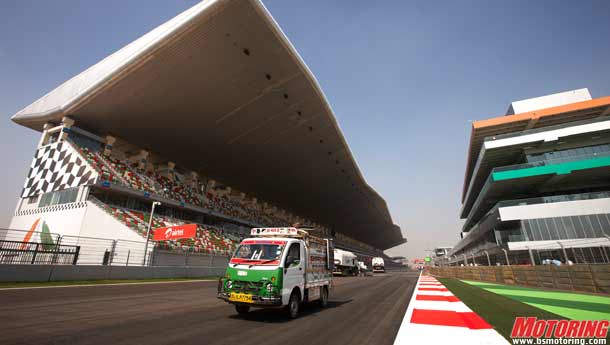 Enough congratulations already. It’s time to put some thoughts into action to “Indianise” Formula One. And why not, I say? If carmakers can make India-specific cars, why can’t we make the sport cater to our tastes? After all, we have now moved our status from Third World to Second-and-Half World thanks to putting up a good show with the Grand Prix. So here are ten tips to make the next Indian GP even more successful:

1. All the GP cars should be fitted with loud horns. It will make BIC feel just like the average Indian road. Even if the backmarker isn’t going anywhere in a hurry, he can simply honk while passing through the empty straight for entertaining the folks in the grand stands.

2. ‘Chamcha’ hoardings to be put up at the venue instead of UBS, Pirelli, etc. These beautiful hoardings, which dot our countryside, will have mug shots of all the insects who want to attach themselves to top leaders and will have wonderfully coined slogans like ‘Hardik Shubeccha’, ‘Happy Birthday Jhappi’, ‘Yuva Neta’, ‘Welcome’ and ‘Pharmula Ek Ke Shubh Kaamnaye’

3. Tilke is supposed to have designed the BIC with influence from the best sections of GP tracks from around the world. But he missed something. For the next Indian GP, we should emulate Indianapolis. They call it the Brickyard, right? We can have the Paverblockyard. Sections of BIC can be paved with paver blocks. These usually come loose when a bicycle passes over them, so imagine powerful F1 cars! Wouldn’t it be awesome to see GP cars driven over loosely fitted paver blocks? Like on Mumbai roads, we can get to see plenty of exciting accidents. Who said F1 is boring?

4. Why should Vettel drive? Get Tendulkar to drive instead. F1 viewership in India will jump to unprecedented levels.

5. Indian TV channels along with their anchors should be allowed to be present in the pits. Then when the cars draw up for pitstops, the TV guys can also gather around and ask the driver questions like ‘Aapko kaisa mehsus ho raha hai?’ or ‘Baby Bachhan boy hoga ki girl?’ These incisive in-your-face questions will get viewers into the thick of action... Watch the TRPs shoot upwards!

6. There is no question about it: we need to have several safety cars, not one. And these will not be Mercs, but our beloved Amby. We need to have a convoy of white Ambassadors with dark tinted glasses and blazing beacons. If that doesn’t give you an idea of the VIP-ness of the event, nothing will. Bernie, take note.

7. The fuel should be adulterated. To empathise with the common man and to make the sport universally accepted in India, the fuel should be of the same quality that you would get on any highway in India. Can you imagine what will happen to the cars then? Gunk will slow the engines down, and if you’re lucky, one or two may even explode. It calls for new pitstop strategies altogether.

8. I am not suggesting we should go for cheap entertainment like getting canines and cattle to cross the track during the race, but it can always be considered if Tendulkar is not driving.

9. Get a Pakistani F1 team. If they don’t have the budget, let them participate only in the Indian GP.

10. Best of all: We should have the BIC hold more events, right? So why don’t we hold MotoGP, SBK, DTM, the Truck Racing Championship, etc? Uh-huh, not what you’re thinking. These races should be held all at the same time along with F1. Imagine - it would be just like our roads, only faster!