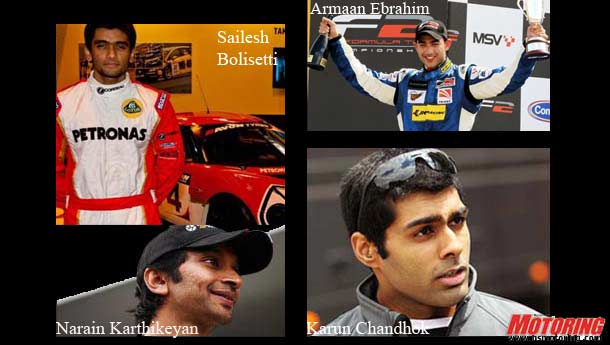 If you were hoping to see an Indian driver in F1 again, you’ve got plenty of reasons to be happy. NARAIN KARTHIKEYAN is back in Formula 1, driving for the HRT team. The Indian had stiff competition for the race seat too, with Vitaly Petrov and Vitantonio Liuzzi also vying for the same spot. But in the end it’s Narain who’s won himself the seat and will partner Pedro de la Rosa through the entire 2012 season of Formula 1. Way to go, Narain!

Meanwhile, former HRT and Team Lotus driver, KARUN CHANDHOK, will be taking part in the FIA World Endurance Championship. This newly launched series is the first endurance series of world championship status since the World Sportscar Championship came to an end in 1992. And it’s a very prestigious racing series too. After all, it includes the 24 Hours of Le Mans and the 12 Hours of Sebring, two of the most gruelling endurance challenges in the world. Chandhok will compete for JRM Racing, sharing a car with Peter Dumbreck and former Le Mans winner, David Brabham.


Then there’s ARMAAN EBRAHIM. The 22-year old driver who has spent the last couple of seasons driving in the F2 series in Europe now heads to North America for his next racing initiative and he’s sticking to single seaters. Ebrahim’s been snapped up by Team Fan Force United for the 2012 Indy Lights Series. He will compete in all twelve races in the season, starting with the first race on March 25th at St Petersberg in Florida.

And last, but not least, watch out for SAILESH BOLISETTI. You might have heard of him because he won the inaugural Volkswagen Polo Cup championship in 2010. Since then, Bolisetti has been racing in the Scirocco-R Cup in Europe. But, the 2011 season’s not been easy for him due to lack of testing time. So, what’s he going to do now? He is going to be taking part in the British GT championship in 2012, driving for Lotus Sport UK. The Indian driver will get behind the wheel of a race-spec Lotus Evora that makes 360 bhp. Quite a jump from the cars he’s used to driving! What works to his advantage is the amount of practice and test sessions that he gets. In the week before each race, drivers are allowed one practice day, and during the race weekend itself, there is an hour and a half of practice time. British GT’s seven-race season kicks off at Oulton Park on April 7.

There are more Indian racers to watch out for too, like Aditya Patel, Parth Ghorpade and K Rajini. And we’ll fill you in on their plans as soon as they’re confirmed. Meanwhile, you know who to cheer on!