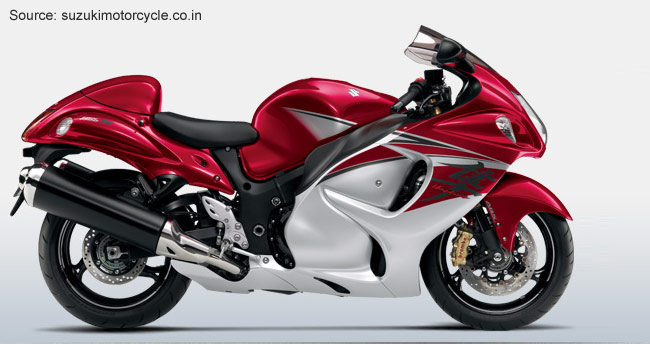 Suzuki India had recently surprised its fans by announcing the local assembly of the popular and iconic motorcycle Hyabusa at its plant in Manesar, Gurgaon along with a huge price cut.

Now, the made-in-India superbike comes with two additional items - saree guard and front license plate holder - which are not seen on the models that are made in Japan. Both items are mandated by the Indian government. While they do take away some of the Busa’s stunning road presence, the good news is they are easily removable.

While most motorcycles have a single piece saree guard, the one in Hayabusa is a two-part grille which is fastened to the chassis above and below the silencer. Will a Hayabusa rider have a saree-clad pillion rider? You never know, there may be one!

The second addition is the number plate holder, which arises from the front fork and forms a loop around the fender. The new additions definitely lower the overall aesthetic quotient of the Hayabusa by creating an unwanted aerodynamic drag, but then it’s compulsory to have your registration numbers promptly displayed on a plate at both ends of the vehicle.

Assembling the Hayabusa in India also brought cheers to consumes as the 1300cc monster would be cheaper as compared to its CBU version. The Hayabusa now carries a price tag of Rs. 13.57 lakh (ex-showroom, Delhi) which means a price cut to the tune of Rs. 2.3 lakh. This move made the Hayabusa affordable by roughly Rs. 5 lakhs as compared to its direct rival, the Kawasaki ZX-14R.