Skoda has revealed the official pictures of the upcoming third generation Superb's dashboard. The Czech automaker will introduce the new Superb by mid of this month and it is set to go on sale in Europe by mid-2015. Speaking of the Indian launch, it is expected early next year. 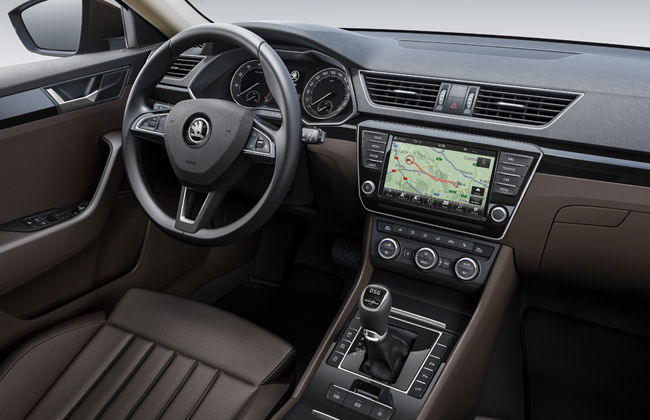 Like its exteriors (Superb’s sketch released couple of months back), the cabin of the new Superb is bettered in terms of quality and material used. The design of the dashboard is in- line with the recent Skodas - Octavia that is on sale in the country and the new Fabia. Looking at the image, steering wheel is similar to the one debuted in the 2014 Superb facelift. Apart from this, it features a large screen infotainment system, electronic parking brake, park assist amongst other. Moreover, the image released is of Superb’s Laurin and Klement trim!

Adding more on it, Skoda started teasing the new Skoda since December 2014 and till now the company has revealed the sketch of the same. Seeing the sketch, the design draws heavy inspirations from the Skoda’s VisionC concept which was showcased at last year’s 84th Geneva Motor Show . Moreover, the daytime running LEDs and Bi-xenon lamps positioning hints of the one in the Octavia. Speaking of the engines, though the details are not out yet but the new Superb will borrow the existing updated powertrains from its sibling - 2015 Volkswagen Passat, which is bound to enter India this year.