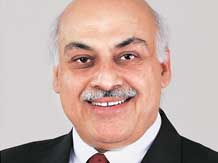 When it started in the mid-1970s, automobile component manufacturer Motherson Sumi Systems Ltd (MSSL) was a trading company. It was only when Maruti Suzuki was formed in the early 1980s that Chairman Vivek Chaand Sehgal floated the automotive initiative. Sehgal, now a veteran in this space with experience spanning more than three decades, recalls that there were around 600 vendors vying for Maruti Udyog's wiring harness business. What turned the game in favour of his company was speed. "I had a friend working on electric parts in Noida. When I told him that I wanted to localise this particular component, he said it would take at least 15 days. We did not have that time. We got down to work and late into the night we managed to finish the moulding device. The JV was formed in a week," Sehgal says.

What has enabled Sehgal to deliver success since then is his persistent ability to stay ahead of the curve. In 1999, MSSL decided to shed its dependence on one client or geography. It also resolved to grow its content per car and be a one-stop solutions provider for OEMs, rather than a manufacturer of individual components and products. To achieve the scale it had in mind, MSSL had to look beyond India. Sehgal says, "By 1998-99, what we saw was that every growth forecast made about the passenger vehicle industry or two-wheeler sales was coming true. We decided to go all out and expand. But to do that we realised we not only had to supply but also own technology." He had no option but to go in for acquisitions overseas, making his first such purchase in 2002.

Overall, between 2002 and 2015, MSSL has made 15 acquisitions. Four of these - Stoneridge Inc, Magneti Marelli Shock Absorbers, Minda Schenk and Scherer & Trier - were made in 2014 itself.

Says Pankaj Mittal, chief operating officer, MSSL: "Visiocorp was our joint venture partner. After the Lehman crises, Visiocorp was running severe losses. We decided to acquire the company and that became a game-changer for us. It helped us gain global scale. Six months after the acquisition, we got huge orders. We set up our largest unit for rearview mirrors in Hungary and also established greenfield units in Thailand, China and Brazil to meet customer requirements in emerging geographies."

The added benefit of the acquisitions was that they enabled MSSL to expand its core business of wiring harnesses abroad. "Setting up a greenfield facility in a new market is difficult. But in the countries where we gained presence overseas through our acquisitions, it became easier for us to establish additional units," Mittal adds. Currently, MSSL has over 150 manufacturing units spread across 25 countries, and new units are being put up in Germany and the US. The company plans to invest around Rs 800 crore each year for the next two years in expanding production capacity across countries.

Sehgal says MSSL believes in harnessing multiple growth engines to drive expansion. To this end, apart from acquisitions, the company has forged as many as 26 collaborations.

To de-risk, the company is also working on a policy whereby no single client, no single country and no single component contributes more than 15 per cent of its turnover.

MSSL says it makes five-year vision plans because it knows that in any business cycle, there are likely to be one or two years of downturn, as happened with the Lehman crises. MSSL has already achieved a topline of $5 billion a year ahead of target, but Sehgal says that there is a still a lot left to achieve. "There is a very important milestone which we have to meet. As per our 2015 plan, we have a RoCE target of 40 per cent. Against this, we have achieved only 26 per cent on a consolidated basis and 39 per cent on a standalone basis. There is a long way to go," he says. He declines to specify where MSSL will be in 2020 (in the next five-year plan period), but hints that going by the company's track record, four-fold growth would not be off the mark.

Sehgal clearly has his hands full. But when he manages to get some time off, he enjoys a round of golf. That apart, his six-month-old grandson keeps him busy.