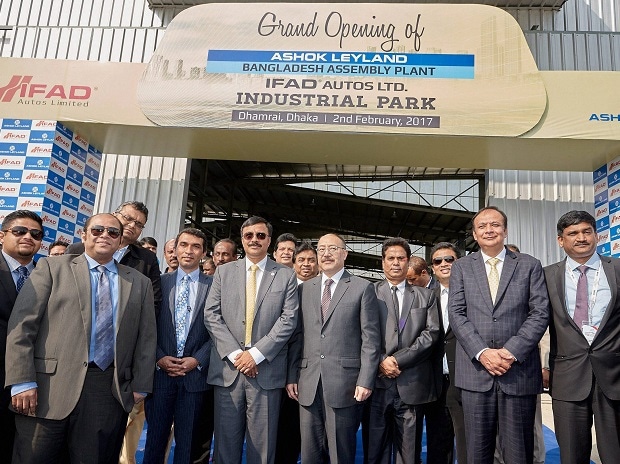 Ashok Leyland on Thursday announced the opening of its new assembly plant in Bangladesh capital Dhaka.

Built over a period of 15 months, the plant is spread over an area of 37 acres. The project is a collaboration between the company and IFAD Autos of Bangladesh. The latter will invest around Rs 75 crore in the facility.

Vinod K Dasari, Chief Executive Officer and Managing Director, Ashok Leyland Ltd. said, "Bangladesh is an important market for Ashok Leyland. With the inauguration of this new plant, together with the robust presence of IFAD Autos, we expect to make significant inroads into this region."

With a capacity to roll out 600-800 vehicles each month, the plant is equipped with manufacturing equipment and assembly lines. It will also be facilitated with a bodybuilding and vehicle testing facility which will become functional in the next two years.

Taskeen Ahmed, managing director IFAD Autos. said, "Bangladesh is a country that is developing very quickly. In such a scenario, Ashok Leyland vehicles will prove to be a boon for the country's infrastructure. We look forward to forging a strong relationship with Ashok Leyland, as we have done in the past."

Traditionally, Bangladesh has been a good market for the Indian automobile companies. In view of the future growth potential, Society of Indian Automobile Manufacturers (SIAM) has organised the Indo-Bangla Automotive Show 2017 which is scheduled from February 2 to February 4.

At the show, Ashok Leyland has displayed a range of its products suitable for its market.

Ashok Leyland vehicles are currently available across the country.

Now, about 21 IFAD-owned area offices and their 12 dealers are spread across the country to focus on sustainable growth.