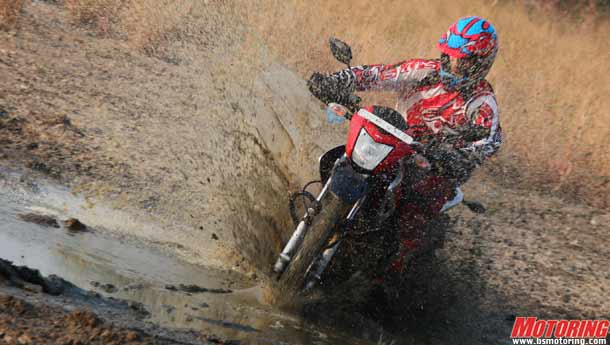 It all started with the SX Enduro, archaic as it looks right now, it was one of the coolest things on the road back then, save for a RD350 or a Standard 2000 in bright red. It was so cool in fact, for me at least, that it eventually translated to hand-drawn full-page adverts for it in the back of my history books, decked out with big snazzy graphics and a punchline or two. Of course, that off-roader went off the road quite quickly and the rest of the population, puttering along on their Chetaks, couldn’t be bothered. So, I never really got my hands on one till date but the dream was sweet, however short-lived it was. It took another 15 years of my life for India to see another on-off road motorcycle on sale and you know what I’m talking about – The Hero Impulse, a re-branded Honda NXR150. First things first, it’s a proper Honda with Hero decals slapped on, one sold in the South American markets so I think that will allay any fears you had about it being a half-baked product. The Latinos do love this motorcycle. Secondly, it’s not pretending to be an on-off roader, it is one. The suspension, the clearance, the tyres, the flat, wide handlebars, the fender, the slender seat, the high-mount exhaust – the component s are all there and when I took it out for a short spin in the dirt, I knew the components were working together cohesively. Sliding into corners, sliding out of the corners on the gas, through the muck and bushes and rocks and gravel, launching the thing off mounds and bombing up and down the countryside – it’s quite a recipe for some good ol’ fun in the dirt. The motor feels a bit underpowered, especially on the road, but it’s a very sweet, well-finished motor - very refined and will be economical to run. The tyres are a letdown though, especially on the streets, so start scouting for good on-off road rubber if you’re planning on buying one. We even let a pro Moto-X dude - Malcolm Ilavia from Performance Racing - take it for a spin and he loved it – pulling massive slides in & out of corners at massive speeds. So, yes, after a long wait, a dirt bike is here on sale in India and despite the fact that it’s one of the most fun motorcycles on sale today, the price tag reads Rs 66,800 ex-Delhi. Sounds like a winner, then.   [To read about our awesome day in the dirt with the Hero Impulse, check out our December 2011 issue. Hitting stands soon.]